When Arizona State University student Sidney Stoffer applies to graduate schools, she can tout a journal article she co-authored as an undergraduate in Barrett, the Honors College. Stoffer and four of her classmates were asked by criminology and criminal justice professor Danielle Wallace if they would be interested in fulfilling their honors credit by doing a different kind of honors project: a research paper. 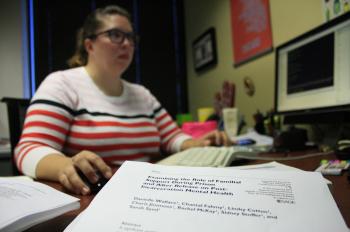 That time frame was just three weeks. And Wallace wasn’t the only skeptic.

“Going into this research paper, I was a little hesitant and unsure that I would actually be able to support my classmates and teacher,” says Stoffer, a criminology and criminal justice major.

Wallace let the students pick one of five possible topics to research and write about that were related to their class, CRJ 494: Crime, Violence, and Public Health. The students chose the impact of family support on inmates while in prison and after they are released. They used a dataset from the Department of Justice called the Violent Offender Reentry Initiative. It tracked the outcomes of 2,391 individuals who served time in state and juvenile prisons.

“One of the things that make this kind of research unique is that very few studies have ever looked at the positive and negative aspects of family support,” says Wallace. “We all need it, especially returning offenders, because they have been in prison.”

Team members were surprised to find that positive family support had no impact on inmates in prison or after they were released. However, they found negative family support, such as disappointment or criticism by family members, was associated with lower mental health upon a prisoner's release. The research team suggests allowing more in-person family visits and virtual visits via the internet might improve prisoner's mental health and family relationships.

“They did an excellent job,” Wallace says. “All were great writers. They got right to the point. It’s truly astounding that students with such little experience researching could do that.”

Their article, ”Examining the Role of Familial Support During Prison and After Release on Post-Incarceration Mental Health,” will appear in the International Journal of Offender Therapy and Comparative Criminology. An online version was published in August.

“It was really one of my best experiences as an instructor,” says Wallace. “Being able to do this with them and seeing how much pride they had doing this was remarkable. They deserve every accolade possible for getting this done in the time frame I gave them.”

Stoffer admits it was a daunting task, and credits the guidance of her professor and the hard work of her teammates for turning the idea of publishing a research paper into reality.

“We worked well together," Stoffer says. “Everyone was very agreeable and easygoing but held up their part of the task. All of these factors made the assignment a very enjoyable experience.”

More than any faculty member at ASU, Michael Angilletta can claim to have the best sense of humor after winning the second annual Funniest Teacher Contest on Sept. 15.

More than any faculty member at Arizona State University, Michael Angilletta, associate director of undergraduate programs in the School of Life Sciences, can claim to have the best sense of humor after winning the second annual Funniest Teacher Contest on Sept. 15.

The contest was hosted by Project Humanities, an ASU initiative striving to instill passion for and understanding of humanities study, research and humanist thought in individuals and communities within and around ASU. 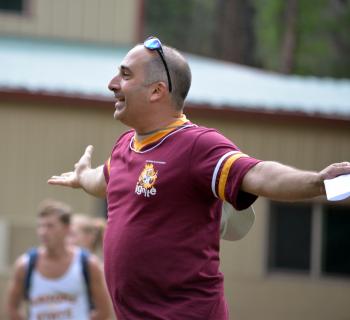 Initially, students had the opportunity to nominate professors by writing 100-word letters of support. The teachers then made videos to demonstrate their dedication to keeping humor in the classroom, and students could later vote for their favorite online.

The winner was announced at an event in the Memorial Union on Monday, after a showcase of the videos and an hour-long question-and-answer panel with the nominees. A final round of in-person voting decided that Angilletta had won, and he accepted his award from South Africa, via Skype.

“To me, it was validation that we were doing the right thing,” Angilletta, a professor and senior sustainability scholar within the School of Life Sciences, said of winning. “This is the greatest achievement of my long life!”