ASU sustainability alum overcomes challenges to climb to the top

With her son in tow, Christa Brelsford showed up to practice before the IFSC Paraclimbing World Championship competition, but she was turned away at the door. No babies allowed.

"So I practiced on the birthday party wall and impressed all the six-year-olds," she said. 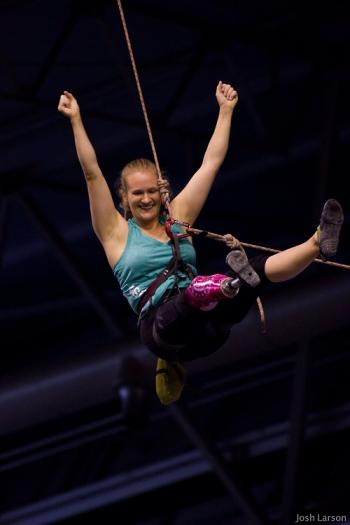 If you spend any time with Brelsford, who graduated this summer with a doctoral degree from Arizona State University's School of Sustainability, you'll get the sense that this is a supremely practical person who is guided by a strong sense of self – and an innate desire to do good in the world.

That's what Christopher Boone, now dean of the School of Sustainability, found when he met Brelsford at a green jobs fair in 2007 and convinced her to come to ASU. That's what Matt Lauer found when he interviewed Brelsford for the TODAY show in 2010 after she was badly injured during an earthquake in Haiti.

Brelsford's path is sometimes unconventional, but her internal compass consistently guides her to the destination she seeks.

When Brelsford was 16, she dropped out of her Anchorage, Alaska, high school. She got good grades at Steller Secondary School – an alternative school that treats education as a process, not a product. But Brelsford's educational process left her feeling like a bit of a misfit.

Brelsford applied to Simon's Rock, a college aimed at younger scholars like her, and was offered a full scholarship. So she quit her high school. "My mom had to let me go," she said.

In the time between Simon's Rock and Columbia, Brelsford climbed every rock from Alaska to New York, and also found time to teach preschool. Inspired by a four-year-old child who had learned English within a month of immigrating to Alaska, Brelsford enrolled in an immersive language school in Guatemala and lived with a host family there for six weeks. Then she toured the country and taught math games at an orphanage until it was time to start her first semester at Columbia.

During her time in Guatemala, Brelsford saw the struggles faced by the people there. She observed that Guatemala needed roads and bridges, better infrastructure in general. She wanted to be useful and to do good in the world, so she pursued a degree in civil engineering. Ultimately though, she came to realize that Guatemala's problem was rooted in poverty rather than a lack of engineering knowledge.

She pursued her master's degree, focusing her work at the intersection of economic and social problems. "Economics is a good lens of viewing the problems we see in the developing world, many of which are poverty related," notes Brelsford.

And then at a green jobs fair, she realized that while she was well-qualified for a number of jobs, more grad school was in her future. That was 2007, and the School of Sustainability was brand new – the first of its kind in the U.S.

"To me, the biggest selling point was that the school was new; I could study what I wanted and nobody could tell me I was in the wrong place," says Brelsford, who had previously found it difficult to find advisers within the engineering school who felt equipped to advise her on the projects that interested her most.

Doing good in the world

Brelsford began her first semester at ASU in 2008. She studied Colorado River water – water infrastructure, water demand, water rights and optimal water distribution. The School of Sustainability provided the support that allowed her to blend her diverse expertise and experience to work on real-world solutions. She spent every summer interning at the Los Alamos National Laboratory and climbing.

In 2010, Brelsford spent her winter break in Haiti, working with her brother on an adult literacy project in Port-au-Prince. When a 7.0 magnitude earthquake struck, Brelsford was trapped under debris. She lost her leg, but felt lucky to be alive, as she told the TODAY show and other media outlets from the Jacksonville, Florida, hospital where she had been evacuated for care.

After recovering from her surgery, Brelsford was fitted with a prosthesis; she was back to climbing within days. Her experience, though, had brought a bit of celebrity. When appropriate, Brelsford has used that spotlight to bring attention to the needs of the Haitian people.

"My biggest goal in life is to use careful thought to do good in the world," says Brelsford. "I was in Haiti to learn how to help, and I research and study sustainability for the same reason."

After successfully defending her doctoral dissertation in June, Brelsford accepted a postdoctoral fellow position at the Santa Fe Institute, working with Luis Bettencourt, whose city-scaling project was featured in a 2010 article in the New York Times.

Today, Brelsford is working to collect and formalize data on the properties of slums worldwide, and to analyze that data in a statistically rigorous way. In these informal neighborhoods – with no certainty about how many people live there and no roads to provide access – there are often no formal city services. "If you can reorganize the neighborhood enough to get vehicles in," says Brelsford, "the cost of providing services goes down."

The work is a great fit for her particular interests and expertise. And, practically speaking, it's a good fit for her life. It's close to her husband's work, and also close to great climbing venues.

In July, Brelsford won her division of the first-ever USA Paraclimbing National Championships. Last week, she was in Spain representing her country at the world championships, where she dominated her division, despite having to practice on the kiddie wall.

"For me, competing in the Paraclimbing World Championships is a celebration of what I am still capable of," says Brelsford. "I also know that this opportunity to excel comes from a place of great privilege." Recognizing that this kind of privilege is not accessible to many Haitians whose lives were changed by the earthquake, Brelsford tied her international appearance to an online fundraiser, Christa Climbs for Haiti.

The newly crowned world champion returns to home and work in New Mexico, following her competition abroad. But her mission remains unchanged – to do good in the world.

ASU professor Sergei Suslov and Regents’ Professor Carlos Castillo-Chavez have been awarded the Leonhard Euler Prize 2014 for their distinguished research contributions in the interface between mathematical sciences and the natural and social sciences.

The award, given by the International Society of Difference Equations and Discrete Dynamical Systems, recognizes stellar research by a mathematician or theoretical physicist in areas that span the contributions of pioneering Swiss mathematician and physicist Leonhard Euler. The awards were presented at the European Advanced Studies Conference, Symposium on Differential and Difference Equations, in Homburg, Germany, on Sept. 6. 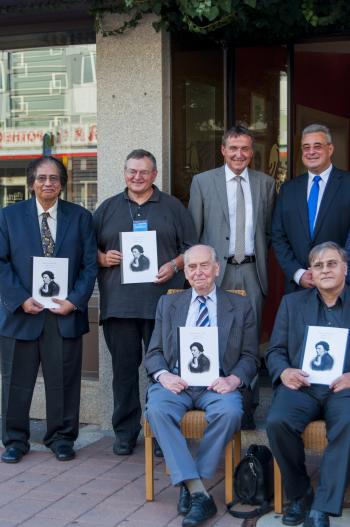 Castillo-Chavez and Suslov were joined by the seven other international recipients of the prize, all of whom were recognized for their distinguished research contributions in the interface between mathematical sciences and the natural and social sciences.

Suslov, faculty in the School of Mathematical and Statistical Sciences in the College of Liberal Arts and Sciences, was previously recognized by ASU for his mathematics accomplishments and mentoring as one of the five 2011 Professors of the Year.

Castillo-Chavez’s lifetime contributions to mathematical biology were previously recognized by his 2010 Presidential appointment to the Committee on the National Medal of Science and his 1997 Presidential Award for Excellence in Science, Mathematics and Engineering Mentoring. He is currently the executive director of the Simon A. Levin Mathematical, Computational and Modeling Sciences Center and faculty in the New College of Interdisciplinary Arts and Sciences and the School of Human Evolution and Social Change.

The Leonhard Euler Prize has only been awarded once before, in 2007, to professor Allen Peterson of the University of Nebraska. The award has been mentioned in the international community since then, and interest in the award has grown. Due to the international interest, an independent committee was formed to evaluate individuals with the scientific directions influenced by the work of Euler. The independent committee focused on honoring those who have significantly influenced the wide field of mathematical and theoretical physics.

Euler is considered one of the greatest mathematicians of all time, and has made significant contributions to modern mathematics. He made revolutionary contributions in the fields of geometry, trigonometry, calculus, complex analysis, differential equations and number theory. He introduced much of the mathematical notation in use today, including the utilization of pi, ln, e and f(x). Euler's Identity, exp(i*pi) = -1, is often cited as an example of mathematical beauty. His remarkable work also focused on the fields of astronomy/lunar motion, acoustics, mechanics, optics and music.