Arizona State University’s Nobel laureate Leland “Lee” Hartwell and physician-scientist Raymond “Ray” DuBois are among an elite group of scientists to be selected into the first class of Fellows of the American Association for Cancer Research.

“Our Board of Directors made the decision to establish the AACR Academy as a mechanism for recognizing scientists whose contributions to the cancer field have had an extraordinary impact. Membership in the Fellows of the AACR Academy will be the most prestigious honor bestowed by the American Association for Cancer Research,” said Margaret Foti, chief executive officer of the AACR. 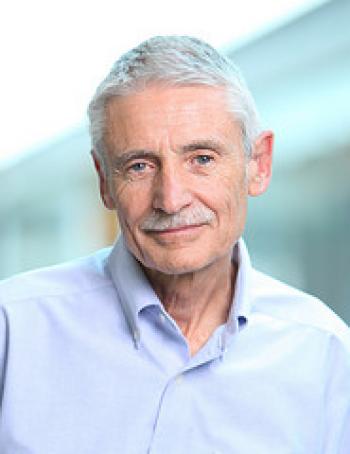 ASU was among just a select handful of universities and worldwide institutions to have more than one scientist recognized and selected as an AACR Fellow.

“Drs. Hartwell and DuBois have made indelible contributions to changing our worldview of cancer research and the development of new paradigms and the way we think about the progression, treatment, and ultimately, prevention of cancer,” said ASU President Michael Crow. “We are tremendously proud of their accomplishments and recognition amongst peers as inaugural AACR Fellows. Hartwell and DuBois are key visionaries in carrying out ASU’s expanding research enterprise, and through their contributions and commitment to cancer research, science education, and the establishment of new partnerships, they are transforming the future of health care and translational medicine.”

Hartwell received the Nobel Prize in Medicine or Physiology for his pioneering work on genes that control cell growth and division, and their links to cancer. In 2009, he was recruited to ASU as the Virginia G. Piper Chair of Personalized Medicine, and chief scientist, Center for Sustainable Health at ASU’s Biodesign Institute, with a mission to sustain health through the integration of molecular and behavioral metrics, to improve health outcomes while reducing its costs, and advancing science education. At the Center, he continues his focus on molecular diagnostics and the establishment of a Global Biosignatures Network.

“I am very pleased to be included in the inaugural group of AACR Fellows,” said Hartwell. “This is an appropriate moment to initiate the AACR Academy since the basic science that they have so arduously supported over the years is beginning to impact disease management.”

From 1997-2009, Hartwell served as president and director of the Fred Hutchinson Cancer Research Center, focusing the integration of basic, applied and clinical efforts of interdisciplinary cancer research. In 1998, he won the Albert Lasker Basic Medical Research Award for his innovative and pioneering work.

DuBois is an internationally renowned expert who has explored the links between inflammation and cancer, particularly, the molecular and genetic basis of colon cancer and development of therapeutics to help in the prevention of colorectal cancer. In December of 2012, DuBois was named the executive director of ASU’s Biodesign Institute and holds joint appointments as the Dalton Chair, School of Health Solutions and professor in the Department of Chemistry and Biochemistry. In addition to his ASU responsibilities, his appointment includes co-leadership of the Cancer Prevention Program at the Mayo Clinic, where he plays a key role in realizing the potential of accelerating an active partnership between ASU and the Mayo Clinic.

"To be elected into the inaugural class of Fellows of the AACR Academy is quite a surprise and an incredible honor,” said DuBois.  “For over 100 years, the AACR has supported cancer researchers and helped advance the early detection, treatment and prevention of this disease. Current estimates indicate that over 50 percent of cancers are preventable. Ultimately, personalizing prevention strategies based on an individual's risk and benefit will move the field forward rapidly. A combination of approaches involving diet, exercise, behavior modification and drug intervention will be most the most effective way to achieve success."

Prior to coming to ASU, DuBois was provost and executive vice president and professor of cancer medicine and cancer biology at the University of Texas MD Anderson Cancer Center in Houston. At MD Anderson, he was responsible for developing and overseeing research strategy, faculty, the School of Health Professions, graduate education programs and initiatives, and Global Academic Programs.

The inaugural class of Fellows will be inducted into the AACR Academy on Friday, April 5, at the National Museum of Women in the Arts in Washington, D.C., as part of the AACR’s Annual Meeting April 6-10.

Arizona State University and the surrounding community will take part in the ninth annual Pat's Run on Saturday, April 20.

Arizona State University and the surrounding community will take part in the ninth annual Pat’s Run on Saturday, April 20. The run/walk will begin at 6 a.m. on Packard Drive and continue on through the streets on Tempe, where participants will finish on the 42-yard line in Sun Devil Stadium.

Sponsored by the Pat Tillman Foundation, Pat’s Run was created to honor the life and legacy of ASU alumnus Pat Tillman who lost his life while serving with the 75th Ranger Regiment in Afghanistan. While a member of the ASU football team, Tillman proudly wore the number 42 football jersey. 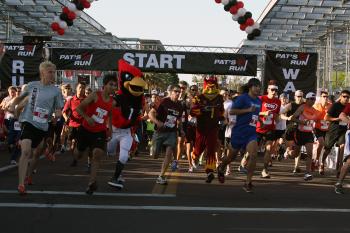 The 4.2 mile run and .42 kids run attracts more than 35,000 people each year. Proceeds directly benefit the Tillman Military Scholars, a program designed to support educational opportunities for servicemembers and military families by bridging the financial gaps left by the Post-9/11 G.I. Bill.

Katie Flores, a nursing student at the Downtown Phoenix campus, has participated in Pat’s Run for the past three years. She first heard about the run while working in the Undergraduate Admissions Office at ASU.

“I was a cross country and track athlete in my undergrad, at Coe College, so I was really excited to register for a local race. I ran that year with my sister as well as several other coworkers,” she said.

For her, the event is proof of the impact that a single individual can make on the lives of many.

“I love participating in memorial runs because it shows that a single individual can influence so many people, even beyond their own life. I have even had the opportunity to meet several Pat Tillman Scholars and truly support the Pat Tillman Foundation Efforts,” she said.

Space is limited so register now.