“Every year, graduates of colleges and universities across the United States are making a difference in communities overseas through Peace Corps service,” said Carrie Hessler-Radelet, Peace Corps acting director. “As a result of the top-notch education they receive, these graduates are well prepared for the challenge of international service. They become leaders in their host communities and carry the spirit of service and leadership back with them when they return home.” 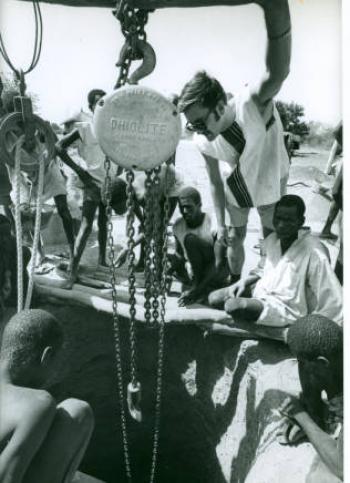 ASU moves up five places from its No. 19 ranking the previous year. It also becomes the sole Arizona school to place in the Top Colleges rankings in any category and marks its fourth straight year among the top 25 large universities. Historically, ASU has produced 944 Peace Corps volunteers.

"Peace Corps announces Top Colleges annually to recognize the schools that contribute the most alumni who are making a difference overseas through volunteer service," said Janet Allen, Peace Corps West Coast regional manager. "We thank and congratulate Arizona State University as one of the 23 universities from the West Coast producing globally-minded leaders who turn idealism into action as Peace Corps volunteers. It's wonderful to see ASU move up five spots this year.”

Hessler-Radelet said the reason for ASU’s jump was the presence of field-based recruiter Lassana Toure, who served as a Peace Corps volunteer in the Kingdom of Tonga from 2004-2007 and works at the Tempe campus.

Toure wore many hats as a community development volunteer in Tonga. He taught geography, history and youth government courses at a local primary and secondary school. Outside of the classroom, he worked on a project to overhaul the village’s water system and coached soccer and track and field.

“Peace Corps was my chance to show the international community the new face of America,” Toure said. “We’re not what you see on TV or what you hear pumping through the radio.”

Toure's decision to join the Peace Corps as a staff recruiter was his way of “giving back to a great organization.”

During Peace Corps service, college graduates make a difference in communities overseas. Volunteers return home as global citizens with cross-cultural, leadership, language, teaching and community development skills that position them for advanced education and professional opportunities in today’s global job market. Ninety percent of volunteer positions require a bachelor's degree. Americans with backgrounds in agriculture, environment, teaching English as a second language, and other technical or language skills related to Peace Corps assignment areas are encouraged to apply for service one year in advance of their target departure date. The next application deadline is Feb. 28.

By drilling into ancient lakebeds along Africa's Rift Valley, a multinational team of researchers is investigating how climate change influenced human evolution.

A multinational research team is taking a look back in time to study the relationship between climate and human evolution. Like all living things, humans have adapted to their environments over time. So understanding changes in environmental conditions, such as climate, can help us understand why and how our distant ancestors evolved.

To peer into the past, researchers from Arizona State University and other institutions will drill into dry lakebeds in Africa’s Rift Valley, which stretches along northeastern Africa from Ethiopia to Mozambique. The ancient lakebeds lie near archaeological sites that have produced fossils of hominins, the group of organisms that includes humans and our ancient ancestors. 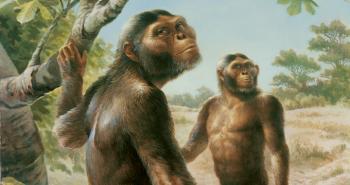 This work, led by Andrew Cohen of the University of Arizona and including researchers from around the globe, is based on previous drilling projects that sampled ocean sediment cores off Africa’s eastern coast. Those cores indicate periods of aridity and varying climate that are widely thought to have played a major role in the evolution of early hominins.

But the ocean cores paint the environmental history of the Rift Valley in very broad strokes, says Chris Campisano, an assistant professor in ASU’s School of Human Evolution and Social Change (SHESC) and a research associate at the Institute of Human Origins.

To find that information, the project team will drill at five different sites in Kenya and Ethiopia that are important to the fossil record of early hominins. The core samples will cover a range of time periods critical to human evolution over the last 4 million years. Some cores will represent the same period as sediments near the Hadar archaeological site, where Lucy, the famous three-million-year-old Australopithecus afarensis fossil, was discovered by the institute's Don Johanson in 1974.

Thanks to erosion, researchers won’t have to drill too far to access these ancient sediments. But at the same time, the sediments have been well preserved, protected by subsequent depositional layers.

“The reason we want to do the lake cores is that there’s no exposure. They’re not oxidized,” says Kaye Reed, a professor in SHESC who studies evolutionary paleoecology.

By matching layers of rock and sediments from the cores with the layers from important fossil sites, Campisano, Reed and the rest of the team will be able to determine the environments and climates hominins like Lucy lived in.

“What we’re going to get is a high-resolution paleoclimate record, which you can’t get unless you do something like this,” adds Reed, who will be collecting fossils from the same time periods represented by the cores.

The climate characteristics represented in the cores will be uncovered using a host of techniques. The samples will be sent to the National Lacustrine Core Facility at the University of Minnesota, where they’ll be split in half.  One half will be archived. The other will be run through various scanners and analyzed for geochemical changes and microscopic fossils.

What can this tell us about the climate millions of years ago? Quite a lot. For example, microscopic fossils of pollen will yield information about the vegetation surrounding the lakes. Microfossils of algae and tiny crustaceans called ostracods will piece together lake levels and pH content. Isotopic changes in organic remains, such as preserved leaf waxes, can tell researchers about the temperatures of air and water as well as changes in precipitation.

The scanners will also look for things like magnetic susceptibility. This would show where there was an influx of sands or dusty conditions, because of the large amounts of iron in dust, according to Campisano, who is the scientific project manager.

Ramon Arrowsmith, a professor of geology in ASU’s School of Earth and Space Exploration, will analyze the history of the watersheds that drained into the lakes. He and his colleagues use a method called cosmogenic nuclide dating. The technique measures isotopes such as beryllium-10 and aluminum-26, which are only formed when neutrons from cosmic radiation strike materials at the Earth’s surface.

With this data, Arrowsmith can piece together the erosion that has happened in a watershed, based on the elements’ decay and the overall age of the core. An abundance of beryllium-10 and aluminum-26 means low erosion in the watershed, because the rocks were near the surface long enough for nuclides to form. Low amounts of the elements signify high erosion rates, where rocks were stripped from the watershed rapidly, limiting nuclide production. Combining the nuclide dating with core dating methods allows researchers to assemble an erosion rate history of the lakes, which helps construct a clearer overall climate picture.

“It’s part of the toolkit that we look at altogether to paint this picture of the changing landscape in and around the lake,” says Arrowsmith. “That then lets us pursue the questions we’re after about the importance of changing environments on human evolution.”

Multiple theories link dry climates to hominin evolution. One idea suggests a drying event led to open grasslands, which forced hominins to walk upright on two feet. Another theory posits that arid conditions at a different time caused food scarcity, shifting our early ancestors to a more carnivorous diet. This would give rise to the use of tools to cleave meat off bones or break them open for marrow. But Reed says it’s unlikely that humans would have evolved one behavior in one dry period, and the other at a different time.

“You can’t invoke the same process over and over for all these different features,” she says. “You would think they would sort of happen all at once if it was necessary.”

Drilling is slated to start in the summer of 2013, and the team is eager to get underway.

“The potential of what we might learn from this is huge,” says Campisano. “This is really a paradigm shift in how we go about reconstructing environments for paleoanthropology.”

The School of Human Evolution and Social Change, the School of Earth and Space Exploration and the Institute of Human Origins are all units of the College of Liberal Arts and Sciences.