From chemist to mentor to entrepreneur, Arizona State University doctoral graduate Telpriore “Greg” Tucker has forged his path to a future in sustainable transportation.

Curiosity and perseverance led to his doctorate in chemistry with an emphasis in electrochemistry and its uses for renewable energy, as well as his popularity as a mentor to K-12 students and university undergraduates. 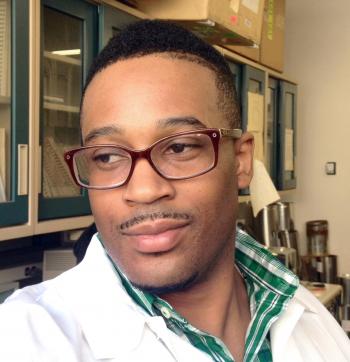 Tucker credits much of his success to a mother who inspired him with her own perseverance and patience. As a single working mother to two sons, she studied eight years to earn a bachelor's degree.

"She believes in education and also the power of research," Tucker said. "As young kids before the Internet era, if we didn’t know something, she would tell us to look it up in the encyclopedia. We went to the library faithfully, where I got a taste of science through classic sci-fi books."

Faith was an important aspect of his upbringing as well, said Tucker.

"Without God and my mother's influence, I could not have achieved this degree."

Curiosity led to his hands-on experimentation with electric bicycles, or ebikes. He found that his own ebike was more useful for short trips around his downtown neighborhood than his truck, and he also frequently pedaled a road bike to the Tempe campus.

“I wanted to experiment with building ebikes. I bought old ones and refurbished them,” he said. “I’ve always had an interest in transportation and how to make it more affordable and sustainable for the public. Since my degree focuses on batteries for renewable energy purposes, I began to see a lot of applications from my research. Some of the best jobs can spring from your hobby or projects that you enjoy doing.”

Creating green products that are fun and appealing makes it easier to coax people away from fossil fuels, said Tucker.

"Everyone is concerned about the environment, but at the end of the day, people want to have fun with their transportation too."

With his manufacturer, he developed an ebike that looks like a cross between a bicycle and a motor scooter, with room to carry shopping bags, books and other supplies. One of his models sits two people comfortably.

Tucker is enthusiastic about the future of ebikes. Ideal for college students, others find them a useful alternative vehicle for trips to work, or leisurely rides to shops, theaters and restaurants.

An ebike is legal to ride on the sidewalk if you are using the pedals, and in either the bike lane or the street if you pull the throttle, he said.

"Ebikes require no gas, registration fee or insurance. Not even a driver’s license. An average rider on an ebike with a 48-volt battery pack will pay just over $15 per year in electrified transportation costs."

Although it provided some income, rebuilding and selling ebikes was time-consuming, and Tucker decided to focus all his energies on achieving his degree before returning to the business full-time.

At ASU, Tucker has worked as a research assistant to Austen Angell in the College of Liberal Arts and Sciences' Department of Chemistry and Biochemistry since 2008. In addition to work and education, he also believes in the necessity of mentoring others so they can also achieve and learn.

Mentors have influenced him, from his science and math teachers in grade school, to middle school mentors and coaches in clubs and groups.

"That’s why I give back," he said, "but I also realize how important it is for people in the community to help teach youth what they do for a living and to make learning fun."

While working with The Electrochemical Society to present an outreach program at the Phoenix Bioscience High School in 2008, Tucker realized "how easy it is to be an initiator." After obtaining funding from his church, Tucker formed the education-based science program of The Ironmen Network for K-12 students, typically nine to 17 years old. "We've been doing an annual renewable energy session for five years now, with hands-on experiments in fuel cells, solar panels, batteries, circuits and more."

Doctoral students from ASU and community members become a life coach to the young men, particularly in STEM (science, technology, engineering and math) subjects and sustainability. "You bring your skill sets, your talents and what you do professionally to the group. We want to enlighten the young men with an activity that is fun, but they will be learning while they have fun.

"Students need an adviser who is a mentor. It’s similar to what used to be an apprenticeship, learning someone else’s craft so that you can use it and develop it, or share it with another student," Tucker says.

Other recent mentoring includes the You Can Go - Men of Color Panel by the Greater Phoenix Urban League, an event for juniors and seniors at Caesar Chavez High School to motivate them to earn their diploma, go on to college and then to pursue a graduate degree.

"It was my first panel as Dr. Tucker with other professionals, and it was a proud moment," he said.

Tucker worked with the Shades Multicultural Peer Mentoring program, founded by ASU Graduate Education, to advise undergraduates. He also served as graduate liaison for the group, which received the 2012 “Excellence in Diversity” award from ASU’s Campus Environment Team.

He is the founding chair of the Valley of the Sun - Central Arizona Graduate Chapter of The Electrochemical Society for fellow doctoral students, which was recently awarded the society's Chapter of Excellence for 2013-2014.

As founding director of The Electric Battery Bike Organization (TeBBo), he established the first dedicated, student-registered club for the promotion of ebikes. The group is affiliated with the new Bicycle Advisory Committee at ASU.

He is also serving as vice president of the Eastlake Park Neighborhood Association and is an active member of the Eastlake-Garfield Steering Committee for the Reinvent Program by the city of Phoenix as an advocate for bike lanes and sustainable living, encouraging green buildings and promoting pedestrians in the neighborhoods.

Tucker is revising his business plan for The Southwest Battery Bike Company in downtown Phoenix and plans to spend at least the next year developing the business. Beyond that, "I want to focus on designing, including a battery system for an electric car that would be more energy efficient. I would also like to do some consulting and see what other opportunities are available in renewable energy."

At the graduate commencement, his mother, brother, family and friends will proudly watch as Tucker carries the College of Liberal Arts and Sciences gonfalon during opening ceremonies.

The American Dream Academy helps families take charge of their children’s education and build stronger families and communities. The academy offers a variety of programs to students, teachers and families, including "Realizing the American Dream," "Financial Literacy" and others.

The Realizing the American Dream program is a 10-week, parent-empowerment program that teaches families how to navigate the educational process and take an active role in their children’s educational success. Through the academy's Financial Literacy Program, parent participants graduate with a written financial plan that includes a savings goal, establishment of an emergency fund and a manageable payment plan to reduce debt.

“Our commitment to education excellence for all students is a top priority,” said State Farm agent Derrick Spencer. “Students are more than our future workforce or tomorrow's leaders, they are the daughters and sons, nieces and nephews of State Farm agents and employees, and they are children of our friends and neighbors.”

Since 2006, the American Dream Academy has implemented 500 programs, served more than 27,000 parents and has impacted more than 65,000 students in Arizona schools.

The American Dream Academy is a core program of Arizona State University’s Office of Educational Outreach and Student Services. The academy connects the university with parents of elementary, middle and high school students in the community. Its mission is to provide parents with tools they need to help their children achieve academic success.