It was not that long after Souad Ali’s book “A Religion, Not a State” reached the top of Amazon's list for “bestselling new and future releases in Turkey” that this ASU scholar of Arabic and Middle Eastern studies found herself before a standing-room-only audience at the American University of Kuwait for her lecture titled “Islam and Secularism.”


Her keynote presentation and her book provided an analysis of the works of Egyptian reformist Azhar scholar Ali ‘Abd al-Raziq, who contended that Islam is “a religion, not a state; a message, not a government.” 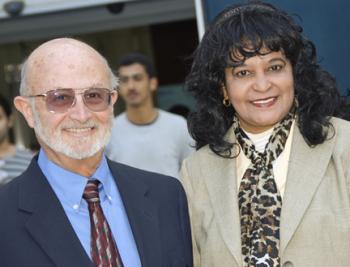 
At the lecture that took place last fall, she spoke in support of the rising ideas of separating religion and state.


“And, during the discussion after the lecture, someone from the audience said that if the author of the book I was analyzing were alive today, he would be beheaded. The audience was clearly very angry about that comment. During the lecture, and in my book as well, I emphasized the need for tolerance and for open-mindedness as prerequisite for an international healthy dialogue,” said Ali. “I answered the person’s comment by asking what is the difference between physical violence and verbal violence? If you disagree with him, why do you want him to be beheaded? Talk to him. Disagree with him.”


Ali is a Fulbright Scholar at American University of Kuwait (AUK) this academic year, teaching, conducting research, and lecturing on Islam and secularism.


“American University of Kuwait welcomes Fulbright Scholars who come to Kuwait to do research and share their scholarship with our students and faculty,” said Marina A. Tolmacheva, AUK’s President Emerita. “Fulbright faculty enrich AUK curriculum, scholarly dialogue and public outreach.”


Last semester’s public lecture at AUK on Islam and secularism was prelude to a lecture scheduled this month titled “Modern Perspectives on Gender Issues: Arab and Muslim-American Female Scholars.” It built on research Ali did for her master’s thesis at Brigham Young University on American and African American Literature. The lecture, hosted by the U.S. Embassy and the American Corner at the AUK library, was planned to coincide with women’s history month.


“Being a Fulbright Scholar is all about an exchange of education and culture understanding,” said Ali, a Sudanese-American who finds Kuwait “very unique among Arab countries in the region.”


“The Kuwaiti women are open, not closed, compared to women in some other Arab societies,” she said. “Here [in Kuwait] I speak about the fact that four women won election to become parliament members, which is a significant breakthrough in the Gulf Region and proof of Kuwaiti women’s ability to change society and improve women’s status. Sheikha Dana al-Sabah, chair of the AUK Board of Trustees, is another bright example. I was attracted to go to Kuwait as a Fulbright Scholar because of its open society.”


Ali is scheduled to participate with the four female members of the Kuwaiti Parliament on a panel April 6 to discuss Arab and Kuwaiti women’s experience in politics. That event is sponsored by AUK’s Gulf Studies Center.


As part of her research this semester, Ali plans to interview those four members of Parliament in addition to other women about the position women play in Kuwait and politics. She also is working on a translation of ‘Abd al-Raziq’s book from Arabic into English, her second book, which is in progress and has attracted an invitation by Oxford University press to submit the completed manuscript.


Her first book, “A Religion, Not a State: Ali ‘Abd al-Raziq’s Islamic Justification of Political Secularism,” critically challenges prevalent misinterpretations of Islam that have endured for centuries. Published by the University">http://content.lib.utah.edu/cdm4/item_viewer.php?CISOROOT=/upcat&CIS... of Utah Press in late August 2009, it was in the top spot on Amazon’s “hot new releases in books” the week before it hit shelves.


Ali, who has a doctorate in Middle Eastern Studies (Arabic and Islamic Studies) from The University of Utah, came to ASU in 2004. She is an assistant professor and faculty head of Classics and Middle Eastern Studies in the School">http://silc.clas.asu.edu/">School of International Letters and Cultures at ASU’s College">http://clas.asu.edu/">College of Liberal Arts and Sciences. She also is director of the Arabic Studies certificate program and an affiliate faculty member in ASU’s Center">http://www.csrc.asu.edu/">Center for the Study of Religion and Conflict, Women">http://wgs.asu.edu/">Women and Gender Studies, African">http://aaas.clas.asu.edu/">African and African American Studies, and Arizona">http://acmrs.org/">Arizona Center for Medieval and Renaissance Studies.


“The study of other languages and cultures is on the increase across the U.S., and Arabic is one of the fastest growing languages,” said Joe Cutter, professor of Chinese and founding director of the School of International Letters and Cultures. “Arabic enrollments at ASU reflect this trend, but I firmly believe that the growth here is as much due to the unstinting efforts of Souad Ali and her colleagues in Arabic as it is to outside events.”


Deborah Losse, ASU’s dean of humanities">http://clas.asu.edu/humanities">humanities, noted that “Souad Ali’s dynamic leadership of the Arabic">http://silc.clas.asu.edu/undergraduate/certificates/arabic">Arabic Studies program, along with her groundbreaking study of Ali ‘Abd al-Raziq’s writings, have brought distinction to ASU. Her selection as a Fulbright Scholar to the American University in Kuwait raises her international visibility and adds to her scholarly profile. We in the College of Liberal Arts and Sciences are proud of her contributions to the field and celebrate her work as a Fulbright Scholar.”


ASU is one of the top producers of faculty Fulbright Awards, named 10th in the nation, according to rankings published in the Chronicle of Higher Education. Four ASU faculty members were selected this year to teach and conduct research abroad. In addition to Ali, this year’s ASU Fulbright Scholars include Mark Schmeeckle, associate professor in the School">http://geoplan.asu.edu/">School of Geographical Sciences and Urban Planning; Adam Chodorow, professor of law in the Sandra">http://www.law.asu.edu/">Sandra Day O’Connor College of Law; and Clifford Schexnayder, professor emeritus in the Del">http://www.engineering.asu.edu/undergraduate/con/why">Del E. Webb School of Construction.


The four are among the approximate 1,250 U.S. scholars who are traveling abroad this academic year through the Fulbright">http://www.cies.org/">Fulbright Scholar Program. Established in 1946 under legislation introduced by the late Senator J. William Fulbright of Arkansas, the program seeks to build mutual understanding between the people of the United States and other nations. The Fulbright Program is America’s flagship international educational exchange program and is sponsored by the U.S. Department of State.

Swimmer Rebecca Ejdervik raced to a career-best time of 59.90, while Merrill Kelly threw seven shutout innings to lift the Sun Devils to victory.

Women's swimmer Rebecca">http://thesundevils.cstv.com/sports/c-swim/mtt/ejdervik_rebecca00.html">... Ejdervik has been named ASU's Female Athlete of the Week for the week ending March 27th. Her performance at the NCAA Championships, which included a fifth-place finish in the 100-yard breaststroke, allowed her to receive All-American honors. "Rebecca stuck to the game-plan and came out with her best time," said Head Coach Tierney-Walker. "She was excited because not only was it her best time but that she had such a great performance at such a high level."

Sophomore Rebecca">http://thesundevils.cstv.com/sports/c-swim/mtt/ejdervik_rebecca00.html">... Ejdervik became head coach Dorsey">http://thesundevils.cstv.com/sports/c-swim/mtt/tierneywalker_dorsey00.ht... Tierney-Walker's first ASU All-American last week. Ejdervik proved to be one of the nation's fastest breaststrokers as she finished fifth at the 2010 NCAA Championships in the 100-yard breaststroke. Her time of 59.90 is not only the sophomore's best time of her career, but it is also good enough for second on ASU's all-time list.

Baseball player Merrill">http://thesundevils.cstv.com/sports/m-basebl/mtt/kelly_merrill00.html">M... Kelly has been named ASU's Male Athlete of the Week for the week ending March 27th. Kelly continued to shine in his debut season for the Sun Devils, as he recorded his fifth win in as many starts. His performance helped the Sun Devils continue their toward stretch as they are now 20-0 and 1 game off of the 1961 team who started 21-0. The Sun Devils now begin Pac-10 season as they host the California Golden Bears on Friday, Saturday, and Sunday at Winkles Field-Packard Stadium.

Merrill">http://thesundevils.cstv.com/sports/m-basebl/mtt/kelly_merrill00.html">M... Kelly was light's out for the Sun Devils in his start against the Houston Cougars on Saturday, allowing only two hits while striking out a career high 8 batters. He did not allow a run in his seven innings of work as he picked up his fifth victory of the season. The Cougars hit only .091 against the junior righty and on the season opponents are hitting only .228.