Much has been made about differences between business and academia. But in a world seeking answers to our most daunting and complex problems, Arizona State University is shifting the old paradigm. Through The Idea Enterprise, the university is connecting its best and brightest with high-level business leaders to help unleash its most promising ideas with the potential to solve societal challenges, both local and global.

Piloted in November 2012, The Idea Enterprise links ASU faculty and staff hatching high-potential ideas with successful senior executives who can advise them on making their “big ideas” actionable. In the past year, eight faculty/staff Idea Teams of two to three persons have each collaborated with talented and experienced Executive Leaders in “low-risk” two-hour sessions. During these private meetings, team members discussed how to advance their ideas to generate broad market appeal and create societal impact. 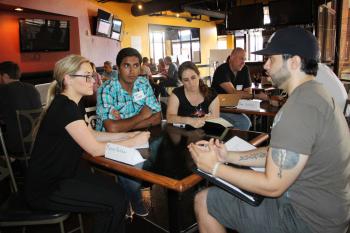 Executive in Residence in ASU’s Office of the President, May Busch, spoke excitedly about the official launch of The Idea Enterprise this fall. She chairs The Idea Enterprise and serves as one of its Executive Leaders. Based in the United Kingdom, Busch heads her own consultancy, May Busch & Associates Ltd. She previously enjoyed a 24-year career at Morgan Stanley, most recently as the firm’s chief operating officer for Europe.

“ASU is an idea factory,” Busch said. “We want to uncover those hidden gems that are the university’s underleveraged assets, so to speak. How can we help ASU take those idea assets and offer insightful, experienced business counsel on transforming them into something greater?”

The Idea Enterprise currently holds three sessions per year on ASU’s Tempe campus – one in the fall and two in the spring. Three ideas are considered per session. The Oct. 31-Nov. 1 session is already filled; consequently, interested faculty and staff are encouraged to apply for the spring 2014 sessions. Information and applications are available by contacting Chelsea Chamberlain, special projects coordinator senior, at chelsea.chamberlain@asu.edu.

Busch encouraged ASU faculty and staff to use The Idea Enterprise as a non-threatening, but real-world practice round for testing the viability of their ideas. She emphasized that the enterprise is an independent body – of the university, not from the university – and that the Idea Team is under no obligation to follow through on advice from the Executive Leaders. But team members must be committed to making their idea happen and driving it forward, she added.

Busch also assured faculty and staff that these uniquely talented private sector business leaders will not “Donald Trump” them. “It’s not a shark tank. It’s more like a dolphin tank,” she laughed.

“The CEO’s will have read the Idea Team’s briefing materials, so no presentation is required. After introductions, the executives will ask clarifying questions about what they read. Then the remaining 90 minutes is purely a dialogue, a relaxed conversation around a table to answer any concerns that faculty and staff want our business leaders to address.”

Busch characterized the former C-suite executives as seasoned strategic thinkers who can quickly assess opportunities and pitfalls associated with nearly any significant initiative. She added that the two ways in which they are most helpful are determining a strategic business model or approach and then packaging, messaging and communicating an idea.

“Our group is very good at asking questions,” she explained. “When you rise to that senior a level in a very large organization, you have to be able to figure out the right, few questions to ask. You need to be really good at inferring and synthesizing things quickly to get at the heart of what is going to work and not work.”

On the idea side, Busch said four criteria are applied to evaluating ideas submitted by faculty and staff. First, the idea needs to be scalable, or big enough to have an impact. Second, it needs to be dynamic or fresh. Third, it needs to be concrete enough to talk about. “This is not a blue sky brainstorming session,” she said. “It’s all about ‘how do we look at the plan you have and make it as successful as possible?’”

Fourth, the idea should require the kind of strategic input that these business people can provide, as opposed to technical advice. In addition, Busch cautioned faculty and staff that The Idea Enterprise is not a long-term mentoring program or opportunity to present grant proposals.

One of eight ideas already considered, AREA48 suggested a new model for educating and supporting underserved entrepreneurial populations, such as returning veterans, retirees and highly skilled but unemployed workers from the construction, aerospace and defense industries. It was developed by the Entrepreneurship and Innovation Group at ASU, led by Gordon McConnell, assistant vice president for Innovation, Entrepreneurship and Venture Acceleration in the Office of Knowledge Enterprise Development.

AREA48 launched this past summer on the top floor of the Brickyard building on Tempe’s Mill Avenue. Mentors, advice and business training were provided at no cost from June to September to help participants develop their ideas into solutions, products and services. The pilot project was funded by a $148,000 grant from the Blackstone Organizational Grants Program.

McConnell said the opportunity to test drive their proposal with business executives via The Idea Enterprise was extremely valuable. “We wholeheartedly feel that the process of being able to honestly present new ideas to this group and receive supportive criticism is hugely important not only to AREA48, but also for future ASU projects and ideas.”

Another idea, IF-Tech, was brought to The Idea Enterprise by faculty member Gregory Raupp, director of the MacroTechnology Works Initiative for OKED, and OKED vice president and professor William Petuskey, former chair of the Department of Chemistry and Biochemistry in the College of Liberal Arts and Sciences. Raupp previously was founder and director of ASU’s Flexible Display Center.

“Often times when you are working so closely on an idea, you lose sight of other perspectives,” Raupp said. “Bringing IF-Tech to The Idea Enterprise was immensely valuable, as it forced me to think in a different way and look at IF-Tech through the filter of another’s point-of-view and experiences. I have no doubt that the insight and feedback provided by the Executive Leaders will help further IF-Tech advancement.”

According to Busch, her team wanted to refine The Idea Enterprise process with a few early adopters before rolling out the program more broadly this fall to faculty and staff across the university.

“Now we’re at the stage where we’ve proven the system works,” she said. “We’re eager to hear about the breadth and variety of new ideas that faculty and staff are working on. We’re ready for prime time!”

Oct. 3 is National Student Day, a day to honor college students and their service organizations.

September 27, 2013
Oct. 3 is “National Student Day,” a day to honor college students and their service organizations.
Celebrations include a scholarship competition where students can win a $3,000 scholarship by sharing their service commitments and successes. Read more about the contest.
The Sun Devil Technology Center is celebrating the day with a one-day special on all Apple computers. In addition to their normal discount, students, faculty and staff will save an additional eight percent on a computer purchase. For more details and to make a reservation (strongly encouraged), call 480-965-4488.
The Sun Devil Bookstores on all four campuses will be rewarding students with a "buy one T-shirt, get one for half price" deal. Some exclusions apply, see stores for details.
Student