As a child, ASU alumnus Adam Kiefer loved going on road trips to visit U.S. national parks like Yellowstone and the Grand Canyon. Graduating from ASU in 2004 with a degree in geography and skills in computer-based mapping, Kiefer carried that love of natural environments into his professional life.

Traveling far beyond Yellowstone and the Grand Canyon, Kiefer, a geographic informations systems (GIS) specialist, is now working to protect the Virunga National Park, a UNESCO World Heritage Site in the eastern Democratic Republic of the Congo (DRC) and Africa’s oldest national park. Kiefer developed a public safety program that has advanced to the final round of the Google Impact Challenge, a competition that supports nonprofit organizations using technology to confront complex problems. 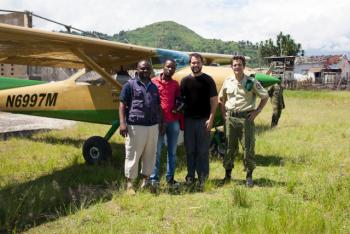 Kiefer’s project proposes real-time tracking and mapping of Virunga National Park, as well as a phone-mapping system, that the four million Congolese living in and around the park could use to report security issues.

“This grant has the potential to bring safety to the park’s wildlife that is found nowhere else in the world, and to make the people who live alongside and within the park better accounted for and safer,” said Kiefer, who worked in conjunction with the Virunga Foundation on this project.

Recognized as one of the most biologically diverse areas in Africa, Virunga National Park has faced numerous challenges over the past two decades, affecting both its wildlife population and its human population.

The park is well-known for its mountain gorillas. It is the only park in the world that is host to three taxa of Great Apes, and a quarter of the world’s critically endangered mountain gorillas live in the park.

In 2007, the park became the object of international scrutiny when nine critically endangered mountain gorillas were killed at the site. Authorities said the crime was likely carried out by members of an illegal charcoal mafia who reasoned that fewer gorillas in the park would mean unfettered access to it and more profit. Illegal charcoal producers cut and burn the dense forest of the Virunga National Park to make charcoal; trade in the substance is lucrative in the DRC, as millions of people in the region use the fuel for cooking and heating.

But illegal charcoal producers are not the only threat to the park’s fragile balance.

For fifteen years, militias controlled large sectors of the park while a civil war raged in the Democratic Republic of the Congo. The country’s situation has calmed, but demilitarizing the park and enforcing the rule of law requires continued attention. The site’s 3,000 miles of forests, savannas, swamps and lava plains, coupled with its rich wildlife and natural resources, make it a target for poachers. And, in recent months, a British oil company, Soco, has sparked controversy with its plans to explore oil exploitation possibilities inside the park’s boundaries.

These complexities and competing interests ensure that the rangers who are tasked with maintaining and protecting Virunga National Park do not have an easy job.

Kiefer, who is currently GIS director for the park, paid his first visit to the site in 2010 and was struck by the park rangers’ efforts. He’d like to use geographic information systems – a technology that can be used both for mapping and to analyze geographic patterns – to help the staff of the Virunga National Park.

“The park rangers who dedicate their lives to Virunga are some of the most heroic people I have ever met,” said Kiefer. “Over 150 rangers have died protecting Virunga National Park,” he added.

On his initial visit to the park, Kiefer was a tourist on a 41-day overland excursion between Capetown, South Africa, and Nairobi, Kenya. He had only read about the gorilla population before arriving.

“Being in the presence of mountain gorillas is life-changing, but to see the park rangers was just as extraordinary,” said Kiefer of his first experience at the park.

Interested in staying involved with the site, Kiefer asked about volunteering for Virunga National Park’s GIS program. The park didn’t have one, but park officials were interested in his expertise.

“It was the opportunity of a lifetime, and one that I simply couldn’t pass up,” said Kiefer.

In 2013, Kiefer returned to Virunga National Park to initiate an aerial imaging project. Building on his aerial photography and GIS coursework at ASU, and his professional work as a GIS analyst, Kiefer installed an aerial GIS camera system in the park’s surveillance aircraft. He began training Jean deDieu Wathaut, who compiles wildlife data recorded by park rangers, on how to use the technology.

Kiefer’s current proposal with the Virunga Foundation would expand on his 2013 efforts.

The project would allow for anonymous phone reporting of poaching threats or other illegal activity in the park, helping rangers to more effectively patrol. Cell phone tower triangulation would be used to authenticate reports, reducing incidents of false reports. The program also aims to enlist local leaders to manage safety and communication hubs along different regions of the park, engaging the community in park protection.

Kiefer said that the GIS park safety project will mean that rangers will not have to be put in harm’s way unnecessarily.

According to Kiefer, the system, if funded, could save time, resources and lives.

The Google Impact Challenge runs until July 31. Members of the public can view nominated projects online and vote for a project if they wish to support it.

Professor Donald Critchlow has been appointed to direct ASU's new Center for Political Thought and Leadership.

Arizona State University President Michael Crow has announced the appointment of Donald T. Critchlow as the director of the new Center for Political Thought and Leadership. The center, the evolution of the undergraduate Political Thought and Leadership certificate program Critchlow has co-directed, will provide research and training for the next generation of local and national leaders on the foundational principles of good government, civic involvement, free markets and political liberty.

“Professor Critchlow is the ideal person to lead this new center forward, and his distinguished background in political thought and research will bring great perspective and value to the center at a time of continued political deadlock and precipitous decline in civic literacy in the United States,” said Crow.

Critchlow, who came to ASU as the visiting Barry Goldwater Chair of American Institutions in 2010, is a professor in the School of Historical, Philosophical and Religious Studies. He has authored or edited 21 books, including his most recent work, “When Hollywood Was Right: How Movie Moguls, Film Stars, and Big Business Remade American Politics” (Cambridge University Press, 2013).

A graduate of the University of California Berkeley with a doctorate in history, Critchlow is president of the Institute for Political History, a national nonprofit educational foundation established in 2000 to promote the civic and academic education of political history and thought. At ASU, he teaches courses on American conservatism, political thought, political conspiracy and contemporary American history.

Working with Kent Wright, an associate professor of history at ASU, Critchlow co-founded the Political Thought and Leadership certificate program, providing undergraduate students with a foundation in the history of politics and political thought with an emphasis on developing civic leadership. The program acquaints students with major thinkers in democratic ideas and includes invited speakers, social events and internships geared to develop leaders well-versed in the principles of democracy.

Critchlow said, “To me, the most exciting aspect of the new center is that it will bring academic education and scholarly research to the larger Arizona community.”

The center has already received significant external support. It will house the Jack Miller Library on Constitutional Principles, a significant collection of classical books on political liberty and fundamental principles at the heart of American civic, cultural and constitutional life, and the Journal of Policy History, a peer-reviewed academic quarterly focused on the application of historical perspectives to public policy studies. The Miller Center is a non-profit, non-partisan and non-sectarian organization dedicated to the support of scholarship, teaching and study of the central ideas and themes of American history and the broader traditions of Western Civilization.

Additionally, a five-year grant providing up to $1.129 million dollars from the Charles Koch Foundation, an organization that supports research and educational programs focused on exploring the sources of well-being, will provide seed funding for the center. A post-doctoral program, faculty-student community workshops, a lecture program, student reading groups and library will offer many of the center’s activities.

“History offers an essential lens through which we can gain perspective on what has been most effective in helping people improve their lives,” said Richard Fink, president of the Charles Koch Foundation. “By exploring the tenets and traditions of societies, ASU’s new center promises to enhance our understanding of the institutions and social rules that can best enable people to increase their well-being.”

Critchlow said the center will seek to engage the larger community outside the university: “Participation from many internal and external partners will encourage community involvement, create a network to foster students’ careers and provide a path for scholars to speak to the larger world.”

“It is important the center is embedded in the community and becomes a recognized and trusted voice in the debate surrounding political thought and leadership,” he added.