The Arizona racers are members of Na Leo O Ke Kai (Voices of the Sea), the largest competitive outrigger canoe club in the state. The first team ever to represent Arizona in the worldwide competition two years ago in Calgary, Canada, this year in Brazil, they also became the first Arizona team to win a medal. 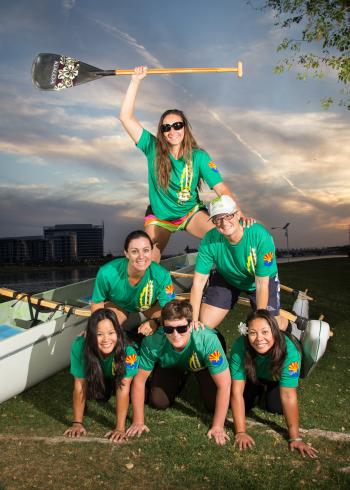 Team members are Margaret (Peggy) Coulombe, director of executive communications in the provost’s office; Anne Cook, who received her bachelor's and master’s degrees in social work from ASU; Marisalyn Singpradith, a graduate of the W. P. Carey School of Business; Alicia Lin-Kee; Teresa Mautino; and Andrea and Rich Gorrill.

Representing the U.S. in Brazil, the Arizona crew joined with paddlers from Northern and Southern California and the Pacific Northwest to compete collectively and individually in several classes of outrigger sprints. The V-12 sprint, where 12 paddlers propel two outrigger hulls lashed together, resulted in the silver medal.

Coulombe, who is the head coach of roughly 200 Arizona members, selected the elite team for international competition. Members of this elite group have trained together for about four years, participating in a race circuit hosted by the Southern California Outrigger Racing Association. The race season goes from March to September. Practice for the 2014 Brazil competition was intense over the course of eight months, with a minimum of four days a week paddling on Tempe Town Lake, often in triple-digit temperatures.

“It was a thrill representing Arizona and the team in a world sprint,” says Singpradith, who joined Na Leo O Ke Kai outrigger canoe four years ago after dragon boat racing at Tempe Town Lake. “We showed that despite having a desert landscape, we paddle as well as other teams that have the ocean for practice. I loved putting all my heart into it and working together with six people as one.”

“Our team connection is really amazing,” Cook says. “Peggy Coulombe always believed in us. She told us two years ago that we would race in the world championships in Brazil. We didn’t believe it could happen, but she made it happen.”

The va’a, or outrigger canoe, originated in Hawaii nearly 4,000 years ago, and a sailing version of the canoe was used to populate island chains throughout Polynesia. The modern sport has spread from Tahiti and Hawaii across the United States, Canada, South America, Europe and Asia. Nearly 2,000 athletes from around the world competed in Brazil this year, in Lagoa Rodrigo de Frietas, where Olympic rowing will be held in 2016.

Traditional canoes in Hawaii were made of the native tropical hardwood, koa. Modern racing canoes seat six, are roughly 40 feet in length and typically made of fiberglass, carbon fiber or other lightweight, man-made materials.

“Our club is very diverse, with members mostly of Asian Pacific Islander heritage,” Coulombe says. “Our club, more than any other in the state, offers more than elite competition and training, it provides a connection to Hawaiian culture, community and a sense of home.”

Two words in Hawaiian emphasize the traditional bonds that help unite the members. "Ohana" affirms the close ties and cooperation of family, including extended family. "Aloha" has multiple meanings in the Hawaiian language, including affection, peace, compassion and love.

“Weather conditions in Hawaii and Tahiti are ideal for paddling. Canoeing is basically a national sport there,” Coulombe says. “Here in Arizona, we are a small club with no facilities and little support, working out in conditions that most would find exceptionally difficult.” Yet the grueling training in the Arizona heat combined with positive Hawaiian values created a unique and winning team, she believes. “What our team has the most of is dedication and a lot of heart.”

Developing a deeper understanding of agriculture's role in the future of energy, innovation and economic growth will be key to addressing global sustainability, said U.S. Secretary of Agriculture Tom Vilsack.

Developing a deeper understanding of agriculture's role in the future of energy, innovation and economic growth, particularly in rural areas, will be key to addressing global sustainability challenges, said U.S. Secretary of Agriculture Tom Vilsack during his talk Sept. 4 at Arizona State University.

Vilsack spoke on “Homegrown Energy: Unlimited Opportunity for Innovation” as part of the Sustainability Series at ASU's Julie Ann Wrigley Global Institute of Sustainability. The lecture series, which explores a range of environmental, social and economic issues, gave Secretary Vilsack the opportunity to discuss with students and faculty the U.S. farming shift to renewable energy. 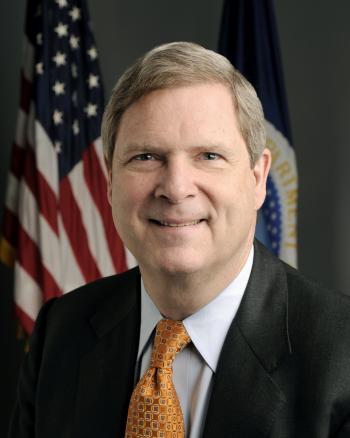 While each year fewer Americans – less than one percent – claim farming as an occupation, the number of ranchers and farmers transitioning to renewable energy sources is on the rise, according to the 2012 Census of Agriculture, which saw that number double from 2007. Solar panels accounted for nearly two-thirds of farms' energy-producing systems.

“The U.S. Department of Agriculture is partnering with the U.S. Departments of Defense and Energy to reduce our reliance on fossil fuels and diversify our portfolio of biofuels and other renewable energy sources,” Vilsack said. “We are also engaging with universities like ASU to explore innovative solutions for challenges related to energy, food and sustainability.”

Prior to his talk, Vilsack met with faculty and leaders from the ASU Wrigley Institute to discuss ongoing ASU sustainability research in the areas of algae fuels and cyanobacteria, food-based and cellulose-based energy sources, sustainable phosphorus and carbon sequestration. ASU's Gary Dirks, director of the institute; Rob Melnick, executive director and chief operating officer of the institute; and Christopher Boone, dean of the School of Sustainability, offered an overview of research projects.

After praising ASU's pioneering efforts to advance sustainability research, education and everyday practice in seeking real-world solutions to today's most pressing problems, Vilsack shared some of the challenges his own department is facing on the path toward a sustainable future.

"Nearly 40 percent of food in the United States goes to the landfill, which means that we are not just wasting food, but also water, energy and resources that were used to grow that food," he said. "We are examining the food system to make it more efficient.

“We’d like to move toward a circular economy, one that is entrepreneurial and innovative, is restorative in nature, and eliminates waste by design. Such an economy will create better paying jobs and help rebuild the middle class.

“We hope to create a brave new world through all of our initiatives," he said.