Undergraduate research opportunities abound at Arizona State University, and archaeologist Michael E. Smith is one of the top faculty for providing them.

As the director of the Urban Organization through the Ages project, Smith has directed graduate and undergraduate students in a variety of roles, from interns to paid employees. The project, funded by the Late Lessons from Early History initiative, has given rise to several presentations, related projects and publications in academic journals. 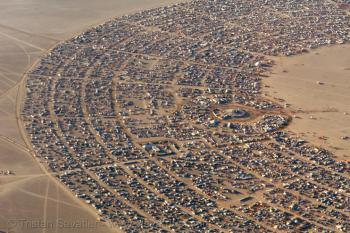 The most recent outgrowth is the publication of a paper in the Journal of Urbanism, authored by Smith and seven – at the time – undergraduate anthropology students.

The paper takes a look at “semi-urban settlements,” places where sizable groups of people gather by choice or force for a week or more in settlements designed to fit a specific purpose. The types of settlements studied were broken into two groups: formal and informal (voluntary).

Some students had already conducted research on their assigned settlement types. Carvajal had studied squatter settlements, Engquist refugee camps and Gilliland Egyptian workers’ villages. The others chose the category that interested them.

“My original idea was to look at as many types of settlements as possible to see if they had some form of neighborhood organization,” Smith says. “This is part of an effort to show that neighborhoods are human universals, whenever cities or other settlements grow beyond a certain size.”

The group’s findings support that idea. Of the 11 different types of semi-urban settlements studied, 10 include the spatial and social units generally defined as neighborhoods. Only disaster camps do not. The group speculates that could be because these settlements are so transient in nature that not enough time lapses for the development of neighborhoods.

“This is a fun topic, and I enjoyed working with the students,” says Smith, who gave his students the chance to delve into the dynamics of such diverse settlements as Native American hunting camps and the famed Burning Man festival’s Black Rock City.

Johnston-Zimmerman, who researched the Occupy Portland camp, was impressed by the bottom-up organization of her research site and its quick evolution.

“Something like this is not often observed in Western society and is normally at a much larger scale,” she stresses. “In some ways, this would be phase one of an informal settlement, whereas structures are mostly tents and fairly temporary, and then progress further into the second phase of semi-permanence, given time. I would say they got to the beginnings of this second phase when it started to cause problems with the city regarding legality of structures on parkland, and occupants were evicted.”

As evidenced by the Occupy Portland example, the usually swift formation of semi-urban settlements provides a chance for researchers to witness urban social processes easier than in well-established cities.

Since the semi-urban paper was accepted for publication, all of the students have graduated and moved on to graduate school or careers.

Smith, a professor in the School of Human Evolution and Social Change in the College of Liberal Arts and Sciences, continues to guide students – graduate and undergraduate – into research and lab opportunities, often including them in his field sessions in Mexico.

“I have found that when encouraged to work at a more professional level, with some training and mentoring, many undergraduates turn into good researchers,” he explains. “That was certainly the case with this paper.“

For one day only, Sun Devil Technology Center on the Tempe campus is offering to pay the sales tax on all Apple Macs and iPads for ASU faculty and staff.

For one day only, Sun Devil Technology Center on the Tempe campus is offering to pay the sales tax on all Apple Macs and iPads for ASU faculty and staff – on top of the already discounted educational pricing.

Also eligible for this deal are iPad minis, Apple accessories, all Dell PC's and all Android and Windows tablets. 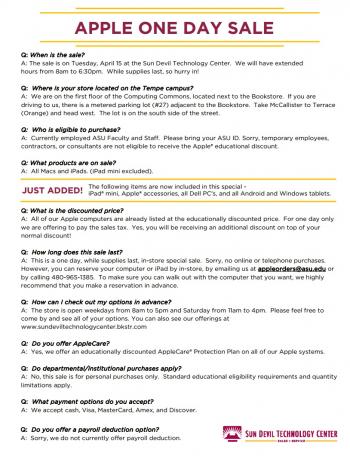 Stop by the center, located on the first floor of the Computing Commons (next to the Bookstore) on Tuesday, April 15, during their extended hours, from 8 a.m.-6:30 p.m., to take advantage of this great deal.

This is a one-day, while supplies last, in-store special sale. Reservations are highly recommended; to reserve an item, you can email the center at appleorders@asu.edu or call 480-965-1385.

Visit the Sun Devil Technology Center website to check out your options ahead of time.