Arizona State University’s applied mathematics for the life and social sciences program is designed to equip students to use math modeling and computation in the resolution of real-world problems. Many of its students focus on areas like sustainability and epidemiology.

Undergraduate Nathan Brockman is using it to build a solid foundation for a career in law enforcement, a field where problem-solving and critical thinking skills may mean the difference between life and death. As a child, Brockman admired police officers and firefighters, and hoped to grow up to be one. “I wanted to be just like them, going around every day protecting and helping out others who need it,” he says.

As he grew older, he leaned more toward the police side because of his interest in justice and his athleticism – he was MVP of his high school team and received the First Team All-Section MLB.

Brockman is aiming for a career with the force and eventual placement as a homicide detective or SWAT team member.

The Scottsdale, Arizona, native is already working with his hometown police department. As a high school sophomore, he entered Scottsdale’s Police and Fire Public Safety Teen Academy, where he got a taste of the training required of police officers and firefighters, as well as an idea about these professionals’ everyday lives. He took to the material immediately and was presented with the Overall Recruit award at the end of the program.

The next year, he was invited back to participate in the Advanced Teen Academy as one of a small and select group of high-performing youth who are interested in careers in law enforcement.

Last year, Brockman was asked to step into a different role in the academy by serving as a junior training officer.

Moving from high school to college was challenging for Brockman, who viewed some of the changes as good and some as bad but most as simply different. Now, as he nears the end of his first semester at ASU, he has adjusted to his new life.

“A big help has been all of the tutoring and resources that ASU presents its students with in order to succeed,” he notes.

Though he almost pursued a criminal justice major, math-lover Brockman turned to the applied mathematics for the life and social sciences program because of its innovation and location.

Offered by the School of Human Evolution and Social Change in the College of Liberal Arts and Sciences, the major offers a different approach to – and way of applying – mathematics.

“It's like taking math and putting it into real-life situations and doing a lot of statistics work,” says Brockman, who was intrigued by the concept and saw the value of that knowledge base in everyday life. He feels confident about the program's ability to provide him with a secure launching pad for his career.

He is also glad to be at the Tempe campus because of its convenience for ASU football tryouts. Brockman is working out to increase speed and strength for a 2015 go.

Unable to find a good primer on nonprofits aimed at undergraduate students, ASU public affairs professor Mary Feeney co-authored a new book that explores the history, role and impact of nonprofit organizations in the United States.

Mary Feeney enjoys teaching undergraduate students about nonprofits. After all, the tax exempt organizations are an important part of American society. Nonprofits raise awareness about social causes, help organize communities and serve people who have nowhere else to turn. But finding a proper book to use was difficult for the associate professor in the School of Public Affairs, which is a part of the College of Public Programs at Arizona State University.

“We have all these undergraduates who are very interested in public service, in engaging in their communities, doing volunteer work and working for nonprofit organizations,” says Feeney. "And there isn't really a clear curriculum for training undergraduates about nonprofit organizations. In fact, most of the textbooks out there are about management because they are targeting master students.” 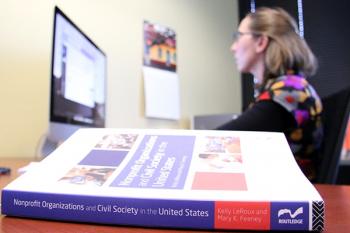 Feeney had an opportunity to do something about it. She was invited to co-author a book with University of Illinois at Chicago professor Kelly LeRoux examining the evolution of nonprofits, the role they serve and their impact on communities. Published in November, “Nonprofit Organizations and Civil Society in the United States” is now available from Routledge books in hard cover, paperback and electronic form.

“What we were really wanting to do was write a book that was interdisciplinary and much more introductory,” Feeney says. "A book that would really speak to what undergraduates need to learn about nonprofit organizations – their role in society in general, their role in the U.S. economy, the sort of special status they have in our tax system, which makes nonprofits here quite different than in other countries.”

The 371-page book is broken into four sections. The first introduces the concept of civil society and how religious and American values influenced the roles nonprofits would play. The second section of the book details how nonprofits add to the social fabric of America through community building, volunteerism and philanthropy. The third illuminates the role and impact of nonprofits on politics, policy and the economy. The final section looks at the challenges nonprofits face, as well as opportunities, including their impact through social media.

“Nonprofit organizations play a key role in civil society in the United States,” says Feeney. “That role is defined by the type of government, economic and social structure that we have in this country. And so, nonprofits play this important part by providing service and support to society. But at the same time, their existence and the way they operate is shaped by American society.”

The book examines nonprofits not through the lens of a single discpline, but through many. That approach is appealling to University of Mary Washington economics professor Robert Rycroft who credits the authors for their ability to synethesis divergent approaches.

"I am an economist but would welcome the opportunity to use this book because they have done of good job with the economics and all the other aspects of the field," says Rycroft. "Similarly it could be used by sociologists, political scientists, historians, and virtually everyone who would try to teach this topic from any discipline. The quality of writing is great and the example and case studies are compelling and contemporary."

The book is illustrated with both historic and current examples that showcase a wide variety of nonprofits and social movements. It includes some colorful examples, such as the World Naked Bike Ride, a play off the Critical Mass movement where bicyclists protest car-centric culture by demonstrating en mass.

Feeney says the book can be used in a variety of classes and disciplines, not just those that focus exclusively on nonprofits. It could also be helpful to people who are just starting careers in nonprofit organizations and aren’t aware of their history and scope.

“It was actually super fun to write,” Feeney says. “We took a format of providing a lot of background and history and theory about nonprofits, but then talking about nonprofits within a context that can be relevant and make sense to undergraduates. So there are a lot of sidebars in the book and examples from current events and news and things that I think undergraduates can get their heads around quite easily.”