College students and their parents often wonder how effectively degree programs translate into related jobs. For Sergey Adamenko, who received a bachelor’s degree in applied mathematics for the life and social sciences last May, the transition has been seamless.

Hired shortly after graduating, Adamenko currently works in Washington, D.C, as a statistical analyst for the United States Census Bureau. He considers the position a solid first step on the ladder to success and cites ASU's transdisciplinary paradigm as a major factor in preparing him for this opportunity.

“While at ASU, I tried a few different majors but preferred the applied mathematics for the life and social sciences program from the School of Human Evolution and Social Change over traditional mathematics or statistics programs due to its flexibility in math education,” he says. “The program enables a student to tailor his or her math education with a variety of classes that fit one's interests or career path.”

The curriculum is geared toward teaching students to use mathematical principles to tackle real-world issues, like pandemics and natural resource management, by blending physical, computational, social and life sciences. The program promotes an appreciation of mathematics’ role in economics, the sciences, engineering and, particularly salient to Adamenko’s case, business and government.

Adamenko is officially a survey statistician, which means that he gages how American businesses invest their capital. “Some of my daily tasks include receiving surveys from the companies, reaching out to companies to gather additional information and processing and analyzing data to ensure consistency and accuracy in reporting,” he explains.

Adamenko, a veteran, was hired as part of the U.S Census Bureau's new corporate hiring process. “After my military service, working for the government as a civilian was always an intriguing option for me,” he mentions.

As a professional in what is arguably the locus of world power, he realizes how his academic career prepared him for where he is now, as well as where he plans to go. “I personally was enthralled with statistics, and the applied mathematics program allowed me to take a number of statistics courses with emphases in life sciences, social sciences and computer sciences,” he says. “My degree has provided me with the mathematical background needed for my current position, and I believe that my diverse education will open doors for me in the future, such as advancing to the next level of my career as a mathematical statistician with the Census Bureau.”

For students wishing to work for the government, Adamenko recommends the following: graduate education, a strong academic record, diverse experiences, an internship with a government agency or military experience.

The School of Human Evolution and Social Change in the College of Liberal Arts and Sciences offers undergraduate and graduate degrees in applied mathematics for the life and social sciences.

ASU professor named 2012 Innovator of the Year in academia

The Arizona Technology Council has named ASU professor Wayne Frasch as the 2012 Innovator of the Year in academia.

ASU professor named 2012 Innovator of the Year in academia

The Arizona Technology Council has named Arizona State University professor Wayne Frasch as the 2012 Innovator of the Year in academia. Frasch received the prestigious award during the Governor’s Celebration of Innovation awards gala, Nov. 8.

Frasch, a professor in ASU's School of Life Sciences, in the College of Liberal Arts and Sciences, developed a highly sensitive nanodevice that can be used for early detection of bioterrorist agents, diseases and pathogens. 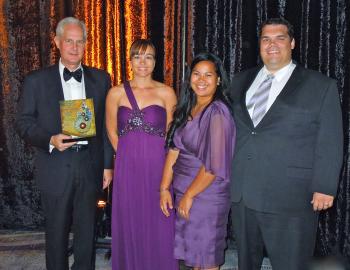 “It’s a great honor to receive the Innovator of the Year award in academia,” said Frasch. “I was humbled to be a finalist, especially alongside the other creative and talented contenders.  I am especially grateful for my fellow researchers and collaborators who deserve recognition for all of their dedication and hard work.”

Frasch’s nanodevice improves upon available technologies in both medicine and national defense. His device is particularly sensitive and fast-acting, and has the potential to greatly improve early diagnosis of diseases.

“We are pleased that the Arizona Technology Council honored Professor Frasch for the hard work that went into creating his innovative biosensor,” said Brian Smith, director of ASU’s School of Life Sciences. “Not only is Wayne a talented professor, he is a skilled researcher who is making a real difference in our society. We are proud of his accomplishments.”

Frasch is the founder and CEO of an Arizona State University spinoff company called Attometrics, Inc. His work has led to nine patent applications, six of which were issued in the past year.

The Governor’s Celebration of Innovation event honors innovative leaders in technology from throughout the state of Arizona. The Arizona Technology Council and the Arizona Department of Commerce chose the finalists.