Liebow has a history of serving venerable and complex non-profits. Prior to assuming his role at AAA on January 28, he spent over two decades working in a range of positions for Battelle Memorial Institute, the largest not-for-profit research and development organization on earth. His specialties are health and social science issues, primarily social policy research and association management. 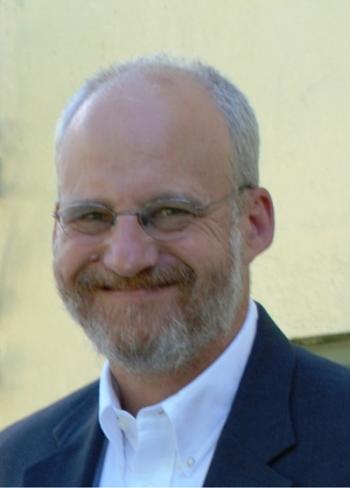 In 1975, Liebow came to ASU’s Department of Anthropology – now the School of Human Evolution and Social Change in the College of Liberal Arts and Sciences – drawn by the relatively new and small sociocultural program and its well-credentialed faculty.

“Our cohort included some illustrious scholars and great, long-lasting friendships,” Liebow says. In fact, on his first day of class, he met Erin Younger, his future wife and one of the first graduates of the ASU museum studies program.

Liebow thrived at ASU before graduating with a doctorate of anthropology in 1986.

Professor James Eder, a sociocultural anthropologist, was Liebow’s committee chair and remains close to him and his wife, catching up with them over dinner when they visit Arizona and once traveling to Seattle to see them on their turf.  Says Eder, “It has been a pleasure to follow his career, and obviously, I very much like Ed as a person.”

Eder explains that when Liebow attended ASU it was a very “social” time, with students and faculty frequently mixing outside the classroom. He calls Liebow “an important part of the glue that held the pack together” and remembers several notable adventures – such as backpacking through Organ Pipe Cactus National Monument – that helped build camaraderie, trust and solid working relationships.

Back in the day, Regents’ Professor Emeritus Geoffrey Clark and his wife, Professor Emeritus Barbara Stark, were part of an early morning tennis group that included Liebow and Younger, and they, too, have followed his career with what Clark deems “a kind of vicarious pride.”  He believes the AAA search committee “made a great choice” in placing Liebow at the helm.

“I feel quite fortunate to have inherited a talented, committed staff, and the association is financially healthy, thanks to Bill Davis’ excellent stewardship,” Liebow says of his AAA predecessor, who retired after 16 years. Still, he realizes there are many challenges ahead. He is particularly focused on publishing futures, international engagements and trying to make the association more welcoming to all brands of anthropologists.

Liebow has extensive experience with AAA as a member of their executive board and as a past treasurer. As he begins his work steering the association through its next phase, he continues to act as affiliate associate professor of anthropology and interdisciplinary studies at the University of Washington.

He is enthusiastic about his newest endeavor and generous with his praise as he looks back on what brought him to this point. Liebow states, “The sociocultural program at ASU was a nurturing home, and the guidance I received from my faculty mentors deserves a great deal of credit for the career I have enjoyed since.”

“Our Congressional delegation enjoys this event and hearing from President Crow,” said Stu Hadley, the director of ASU’s Federal Relations Office. “This year, six of our members and a couple dozen key staff heard an update highlighting the many advancements at ASU over the past decade.” 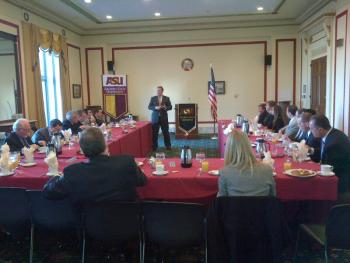 Hadley added that they were especially pleased at the turnout this year, as it took place while Washington, D.C., had basically shut down in anticipation a major winter storm, dubbed "snowquestration."

Office of Business and Finance