Passionate about language and culture, Eric Johnson has gone on to reach a high point in the anthropological world after spending years in the field of education. He has been elected to the American Anthropological Association’s Committee for Human Rights for a term of three years beginning this fall.

Johnson’s ascent to the committee began at Western Washington University, where he studied anthropology, Spanish and education. Upon graduating, he came to Arizona to teach Spanish and English as a second language at Apache Junction High School. After four years of teaching, Johnson decided to return to the classroom as a graduate student and enrolled in the sociocultural anthropology program at Arizona State University. He obtained his doctorate through ASU’s School of Human Evolution and Social Change in the College of Liberal Arts and Sciences. 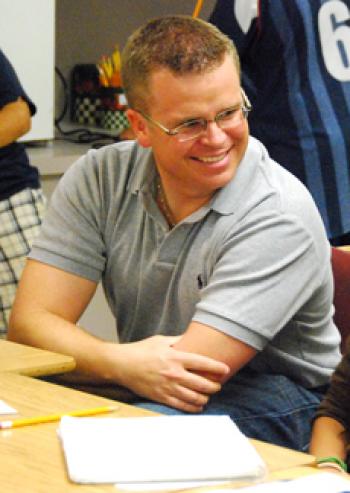 Johnson has never stopped engaging and investing in bilingual students. His wife, Angela, teaches bilingual language arts at a local middle school and together the Johnsons enjoy making visits to the homes of students and participating in extracurricular activities with them. Eric Johnson is also involved with other schools and minority education programs.

“Eric has shown an incredible commitment to making education and English language learning better for Latino students. He taught students with AmeriCorps in Phoenix central barrios and has centered his research on language and literacy with them. He has an unbelievable rapport with the students,” said Elizabeth Brandt, professor of anthropology and linguistics at ASU. Brandt was the chair of Johnson’s doctoral committee and has kept in contact.

Now an assistant professor of bilingual/ESL education at Washington State University, Johnson works with students who are either teachers or pre-service teachers. He is involved with designing home visit strategies, exposing K-12 students to higher education and collaborating with local students, families and educators on issues surrounding language policies and programs. Trying to balance the responsibilities of his research, teaching and service with his commitments to schools and minority education programs can be difficult; however, Johnson finds it fulfilling that his lessons are directly applied to the students and their families in local schools.

His extraordinary interest in promoting language and education issues earned him a letter of support for the AAA Committee for Human Rights from the Society of Linguistic Anthropology. The AAA is one of the world’s premier organizations for those working in – or interested in – the field of anthropology; it focuses on the publication and promotion of anthropological information. Johnson’s election to the committee will mainly involve discussions of major issues concerning human rights violations around the globe and drafting position statements to inform the president of the AAA during two yearly meetings. This can lead to larger human rights discussions involving international governments and agencies.

Johnson believes that students considering a career in sociocultural anthropology should focus on the connection between language and culture. He stated, “Taking multiple courses in linguistics will definitely help students and practicing anthropologists understand the various approaches to analyzing how language use shapes – and is shaped by – larger social factors.” Making these connections can help in academic and professional settings. He also encourages students to take a second language. He believes this not only increases international relation abilities, but the process of learning a language also “demonstrates the intricate nature of language acquisition.”

Johnson has presented at international conferences and has contributed to professional journals and tomes, including the Journal of Borderland Education, Arizona Anthropologist and the Encyclopedia of Bilingual Education.

Currently, he is concerned with researching and publishing articles regarding language policies, immigration and education and is still deciding what his future will hold. He would like to become more involved in international organizations that deal with language rights and education, and to establish a center for immigrant education rights.

There will be nearly 100 booths at the event, including: international coordinators who can help explain what programs are available by region, ASU faculty who lead summer programs, ASU-approved providers who offer semester and year-long programs, former study abroad students who will share their stories, a “virtual visit” photo booth, giveaways, prizes and more. 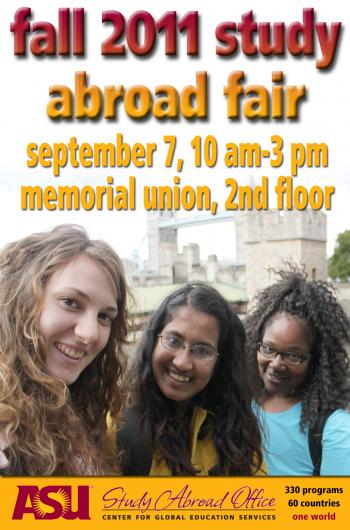 The ASU U.S. Passport Acceptance Office will be there to take passport photos and accept applications for passport cards and books. In addition to the fair, the Study Abroad office will host a handful of informational sessions surrounding the fair about financing study abroad, internships and more all listed on our website.

Study Abroad 101 info sessions are also offered at 3:30 p.m., Tuesdays, Wednesdays and Fridays, at the ASU Study Abroad office, in the Tempe Center.

For more information contact the Study Abroad office at studyabroad@asu.edu or 480-965-5965.