Arizona State University Director of Creative Writing and Associate Professor Matt Bell was faced with a challenge many educators experienced this fall — creating a virtual learning environment that is engaging, fun and interesting for students. But in his new Worldbuilding for Science Fiction and Fantasy course, he was able to do exactly that.

The course, a new iteration of Writing Science Fiction, stemmed from Bell’s interest in meeting students where their interests are while incorporating his own interest in constructing fantastical worlds in sci-fi writing. 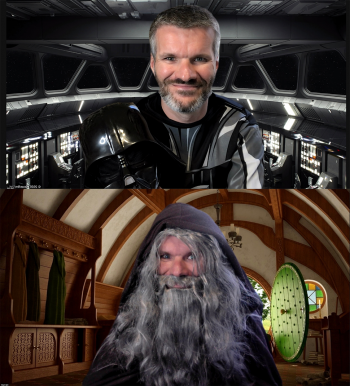 Matt Bell, director of creative writing and associate professor at ASU, dressed as Darth Vader from "Star Wars" and Gandalf from "Lord of the Rings" for his Worldbuilding for Science Fiction and Fantasy course. Download Full Image

Over the course of the semester, students read and discussed six different sci-fi novels: “The Left Hand of Darkness” by Ursula K. LeGuin, “Ancillary Justice” by Ann Leckie, “Parable of the Sower” by Octavia E. Butler, “Embassytown” by China Miéville, “The Player of Games” by Iain M. Banks and “An Unkindness of Ghosts” by Rivers Solomon.

Each student also created and shared an invented world of their own, generating a map of their world and then writing short fictions to expand on governments, religions, architecture, fashion, magic systems, monsters and other creatures, myths and rituals.

As it was an all-remote ASU Sync course conducted entirely on Zoom and Canvas, Bell took the challenges that typically come with virtual learning and used them to his advantage.

“Zoom can be a little chaotic, but instead of trying to tamp that down, I've encouraged it,” Bell said. “I've really enjoyed the different ways the software allows students to communicate with me and each other. On the first day of class, I talked to them about how we'd interact, including suggesting that they feel free to use the chat function continuously throughout class, to respond in real time to my lectures or student questions, to ask each other for clarification, to generally be encouraging or inquisitive. I think the chat is a place where Zoom actually adds to the classroom experience.”

Although Bell originally created this course to incorporate many in-person components, he was pleasantly surprised to see how well the course moved to a virtual modality, and how creative his students were.

“I was so impressed with the enthusiasm I saw,” he said. “The best part of the class, week after week, was the incredible level of creativity the students showed in the fiction they wrote and in the worlds they invented. There were so many wondrous moments in their stories, and their constant joy at each other's creations was a nonstop delight to be around.”

To add an element of fun, Bell showed up to class dressed as different characters from famous sci-fi and fantasy worlds, such as Gandalf from Lord of the Rings and Darth Vader from Star Wars.

“It always made for a joyous start to the class, and if I looked a little ridiculous, so be it,” Bell said. “My willingness to be ridiculous or vulnerable in my nerdiness hopefully put everyone else at ease, and let them feel open to sharing their own wonderful creations.”

Jayde Layne, a student majoring in English with a focus on creative writing, said the format of the course and the environment Bell created prompted a unique learning experience she had never encountered before.

“I think a big part of how the class succeeded was how personalized it was. We had weekly assignments to do and we also did a lot of reading, but the way it was framed was much more free-form than I usually expect from a class,” Layne said. “When given that kind of freedom, the professor didn't have to prompt us to talk about the stories, we would just do it on our own. We analyzed the worldbuilding on our own without having to be assigned book reports or essays to make us do it. When a class is a fun experience, it's a lot easier to keep focused and engaged, especially over Zoom.”

Layne said throughout the semester Bell’s teaching helped give her newfound confidence in her writing, making the process fun and something she looked forward to.

“Matt is full of enthusiasm about fantasy and sci-fi, and that energy is infectious,” she said. “He was genuinely invested in all of our worlds and loved learning about them. He treated every student as his equal and wanted to know our opinions, whether they agreed with his own or not, and gave us a space where we could toss around ideas and build things only to tear them down again, a space to experiment. It's by far the best class I've taken at ASU, and I'm honored that I got to have such a good experience in my last semester here.”

Bell will teach ENG 307: Worldbuilding for Science Fiction and Fantasy again in the fall 2021 semester and said he is hopeful he can re-create the magic that happened this semester, whether the class is virtual or in-person.

“The next version of the class might be roughly similar to this one, but I do have some ideas for other ways of teaching science fiction and fantasy,” he said. “This was a weird and difficult semester for students in so many ways, and I think this class's focus on possibility, invention and community was a true comfort to many of the students in the class. I know it was for me.”

Arizona State University is conducting coronavirus testing for a vulnerable population — those who work with people experiencing homelessness — with help from a $45,000 grant from the BHHS Legacy Foundation.The testing is funded as a result of the generous support of the BHHS Legacy Foundation, an Arizona charitable organization whose philanthropic mission is to enhance the quality of life a...

Arizona State University is conducting coronavirus testing for a vulnerable population — those who work with people experiencing homelessness — with help from a $45,000 grant from the BHHS Legacy Foundation.

The testing is funded as a result of the generous support of the BHHS Legacy Foundation, an Arizona charitable organization whose philanthropic mission is to enhance the quality of life and health of those it serves. 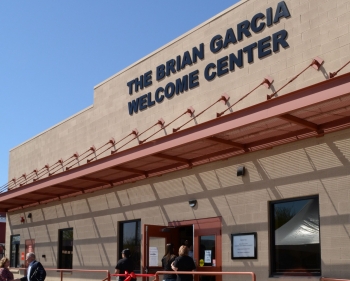 The grant to the ASU Foundation for A New American University will fund efforts by the Watts College of Public Service and Community Solutions-based Action Nexus on Homelessness and partner organizations on the Human Services Campus (HSC) in downtown Phoenix, said Action Nexus Director Shana Ellis.

ASU applied for the yearlong grant, which will run through June 2021, to aid its efforts “to improve the health and quality of life for both the staff and people served through the partner organizations of the HSC,” Ellis said.

“Both ASU Action Nexus and the partner organizations of the Human Services Campus operate under the philosophy that people experiencing homelessness are part of our community. Ensuring their well-being during this health crisis is critical,” she said.

Funds from the grant will make certain that HSC partners’ staff members can continue to be tested for the virus through the ASU Biodesign Institute, Ellis said.

The campus’ partners on the HSC work each day with city, county and state health officials to provide the safest possible environment for people experiencing homelessness who seek services there, as well as the staff and their families who deliver those services, she said.

Testing for those on the HSC providing services to people experiencing homelessness “decreases the spread of COVID-19 in the homeless population and the general population, thereby preventing more widespread transmission of the disease,” Ellis said.

Each day, between 800 and 1,000 individuals experiencing homelessness are served on the HSC.

“Utilizing the ongoing collaborative spirit of the partners on the HSC, the organizations work together to end homelessness for the people they serve,” Ellis said.

“ASU has provided 800 test kits at no cost to ensure staff members of these organizations can be tested for the virus on-site and are guaranteed to have test results within 48 hours,” Ellis said. The on-site medical provider, Circle the City, administers the tests. The grant will cover the cost of ongoing testing for the eight organizations.

The services at the HSC are essential and the campus has not closed due to COVID-19. Ellis said having testing available on-site has provided some peace of mind for employees who may have had exposure to the virus. Employees get their results back generally within 24 to 48 hours, so their isolation time is decreased relative to some other testing sites, especially at the beginning of the pandemic, she said.

“Staff can feel confident that their health is of primary importance while they provide vital services to individuals experiencing homelessness,” Ellis said. “And thanks to the grant from BHHS Legacy Foundation, we can continue to offer this to employees for the foreseeable future.”

Watts College Dean Jonathan Koppell is chair of the HSC board of directors.