Sharon Suarez first attended Arizona State University in 1987 as a 17 year old. Coming from a small town and not having a clear goal in mind, she said the experience was overwhelming and she soon left the university. 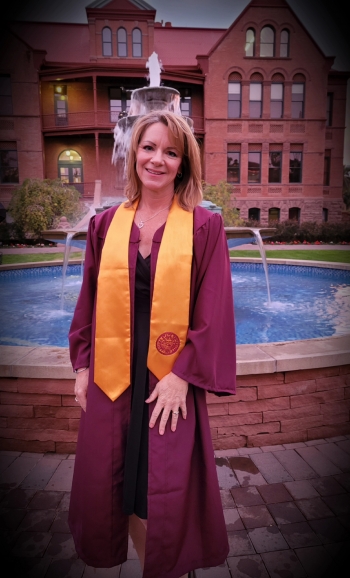 Sharon Suarez graduated this fall with her bachelor's degree in anthropology and a minor in English from The College of Liberal Arts and Sciences. Download Full Image

“I came from a smaller town in Arizona and high school was easy. I knew everybody, I never moved or ever made any changes,” she said. “To show up on campus at ASU… the classes were so much harder and it was an epic life failure as far as adjusting to being on my own, being in school, and poor life choices were made along the way.”

After stepping away from the university, Suarez met and married her husband and started a family.

“We had to support a household and work, so school just became second,” she said.

Three decades later, Suarez returned to ASU and this fall, she graduated with her bachelor’s degree in anthropology from the School of Human Evolution and Social Change and a minor in English from the Department of English.

Suarez shared more about her experiences at ASU and advice for others.

Answer: It's always been my long-term goal to finish ASU since I started there. But then also, when I knew I was going to attend online — the program, the cost, the flexibility — everything just kind of worked.

Q: How was your experience taking courses through ASU Online?

A: The online program was fantastic. It's hard to think about at a certain point trying to start over in school and to go to class and take notes. I didn’t even know that I would know how to sit in a classroom anymore and try to listen to the teacher and retain the information. So for me, or people that have different learning styles, ASU Online is such a fantastic option and is a well-run program. I could listen to lectures as many times as I needed to and read the material as much as I wanted, at my own pace.

Q: What drew you to an anthropology degree?

A: It was one of the few classes from my first attempt that I actually enjoyed. When I visit places and when I want to do stuff, it's the history, it's the stories behind everything that I enjoy. So I got to thinking that was what appealed to me and I could combine my enjoyment of writing and learn the story. I realized, if that's what I really wanted to do, and that's what I enjoyed, then it would make sense that my degree would be in anthropology. And then to have ASU Online have that degree was awesome.

A: One of my classes was "drugs in society;" I'm from a different generation, so for me, there are certain drugs that are popular now that have stigma because of my age. The class was a chance to step back and see some of the drugs in a different light. And then gain an understanding and realization of the impact that drugs have on society and the perceptions that people have and the court system. It was a great class and opened my eyes in a different way and took away the stigma of some of the abuses and helped me think about life a little bit differently.

A: I think each one I encountered had so much knowledge to share and each class really was a benefit in a different way, whether it was their teaching styles or their class production. The more challenging courses I took were from Dr. Jason Bryant because the topic of some of the books were not in my normal realm. I think with his structure, he taught me how to read in a different way where I wasn't reading for enjoyment, I was reading to comprehend and pull more out of things than what I normally did when I picked up a book to read. So I think his class was really beneficial with his teaching style and picking books that didn't appeal to the masses, but finding a way to utilize the information that was contained in them.

A: Keep moving. It’s hard if you think about the long-term goal, but if you take it one step at a time and just keep progressing forward, you'll eventually get there. When I started and I kept thinking about how many classes I had left and how long it was going to take, it was overwhelming. I had to change my mindset and break it up into little parts. But just keep moving — you're never going to get there if you don't keep moving.

Q: What advice would you give to people in similar circumstances as you were, and considering returning to school after a long break?

Designing universities of the future

On Dec. 8, Future Tense and Arizona State University’s Convergence Lab CDMX hosted a binational discussion on how institutions of higher education have been addressing the many challenges presented by COVID-19.ASU President Michael Crow and Instituto Tecnológico y de Estudios Superiores de Monterrey President David Garza joined the virtual event to compare notes on the lessons of 2020 and explo... 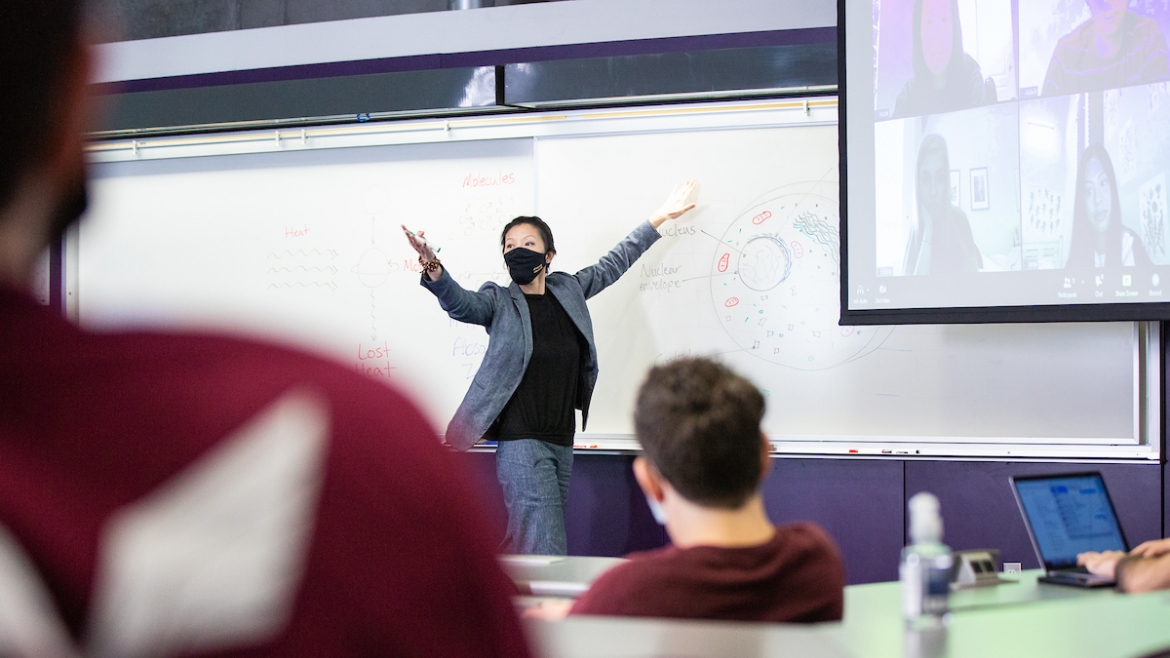 Designing universities of the future

On Dec. 8, Future Tense and Arizona State University’s Convergence Lab CDMX hosted a binational discussion on how institutions of higher education have been addressing the many challenges presented by COVID-19.

ASU President Michael Crow and Instituto Tecnológico y de Estudios Superiores de Monterrey President David Garza joined the virtual event to compare notes on the lessons of 2020 and explore how universities can continue adapting their design and innovating to create a better future for all.

Mia Armstrong of the ASU Convergence Lab hosted the discussion.

“In addition to the shared experience of confronting the challenge of 2020 as a higher education institution, these two presidents and their institutions have an extensive track record of cross-border collaboration, including a joint executive MBA through our business schools, high-impact research on water and sustainability, the modeling of North American energy futures through our Decision Theater network and rule of law programs between our law schools,” Armstrong said.

The conversation began by focusing on what successfully preparing students to succeed in the world has changed in light of the Fourth Industrial Revolution, automation and rapid technological advancement. Armstrong asked Crow to define the “fifth wave of higher education,” the topic of his most recent book, “The Fifth Wave: The Evolution of American Higher Education,” and how it intersects with other economic and cultural phenomena. In the book, Crow traces the development of American higher education institutions across four waves of historical development and then proposes a model for a fifth-wave institution.

“Some of us thought it’s time for a new wave,” explained Crow. “The previous waves were driven by the forces of the country, the democratization of the country and so forth. The fifth wave, of which ASU is a prototype, are research-intensive universities. In many ways sort of an American version of Tec (Tecnológico de Monterrey). In fact, we learned many things in my almost 20 years of visiting Tec and engaging with Tec. That was scale, commitment to all of the citizens, commitment to the entire life cycle of education — high school, college, everything. The fifth-wave universities are highly democratized, research-intensive, scalable, high-speed, technologically driven institutions — very much in the spirit of the scale and diversity of the United States.”

Garza also reflected on his thoughts on the model for the fifth-wave institution and the design aspirations he has for Tecnológico de Monterrey in the future.

“You can see the type of world we are living in, and how we need to reflect about that impact that we need to have. Something that I have been sharing with the community is that I would like our institution to focus in the coming five years on the three 'I’s,'” Garza said. “The 'I' of innovation, the 'I' of research — which in Spanish is investigación — and the 'I' of internationalization. I think by doing that we can increase the positive impact of our university.”

Before shifting the conversation toward the problems that fifth-wave institutions should focus on solving, Armstrong polled the audience and the panelists on an important question: “Do you think that North American universities are designed to conduct research that will help our communities confront existential challenges like the pandemic or climate change?” Crow detailed how ASU has been assuming fundamental responsibility for the social, cultural, economic and overall health of the communities it serves.

“We now have a starker understanding of what we didn’t do, who we didn’t educate,” he said. “That we have an unprepared population who doesn’t understand what a virus is, that we have unprepared schools that have difficulty managing through a complex moment requiring very significant resilience. We have initiated a huge internal reassessment of ourselves relative to what we do, how we do it and how we’re working. Having said that, what we are doing in the immediate moment, very similar to David and Tec, is everything we can possibly do to lower the barrier between the university and our intellectual assets and our creative assets in the community.”

The final topic, voted on by the audience, was how higher education institutions can prepare for the next crisis. Armstrong asked the panelists what crises are at the top of their mind and what we need to prepare for in the future.

“I learned recently this concept of ‘wicked problems,’” said Garza. “I think that that’s the main aspect we are facing. We are going to be facing more frequently these wicked problems, a problem that is very difficult to solve. There is incomplete, contradictory information, there are many stakeholders with different opinions and there are large implications: industrial, economic, social, environmental, personal beliefs and so on.”

Crow explained that a key feature of the fifth-wave institution is working toward a more collaborative — rather than competitive — approach to solving these “wicked problems.”

The event concluded with a joint announcement for the two universities, as Crow and Garza signed a memorandum of understanding expanding existing collaboration between the Tec and ASU student exchange programs. The  Acceso ASU program gives bilingual ASU students an opportunity to take Tec courses online, earning credit toward an ASU degree, providing access to a binational education experience marked by excellence.

“Mexico and the United States are very close first cousins,” said Crow. “We have finally brought ourselves to this point because we are modernizing and culturally evolving and moving in the right direction. One aspect of that is the relationship between Tec and ASU. Two universities in two different countries that have the same vision for the future.”

Launched in 2017, Convergence Lab CDMX is an Arizona State University project that seeks to connect the university with Mexican audiences and partners to explore ideas of mutual interest, through a series of public events and ambitious ideas journalism. Convergence, either between academic disciplines or nations, is the order of the day, and Convergence Lab offers a forum to learn from each other and think our way to a better, shared North American future.