At first dispassionate about his education, graduate was ‘swept away’ by the world of environmental engineering

There were times early in his college years when Dylan Haftings says he “wasn’t really passionate about anything” and “wanted to stop trying.” 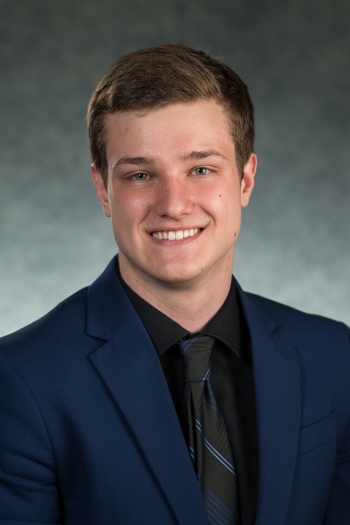 But through his own admittedly odd logic, Haftings came to the conclusion that even if he was not enthusiastic he should at least devote himself “to something that will help the environment and people.”

In other words, he found his passion.

At Arizona State University, Haftings says he has been “kept so enthralled by the classes, the community and the people I have met, that I am ecstatic every time I stop to think about where I am and what I’ve done. I found a group of people who are passionate about the environment and it swept me up in the best way.”

Not that it’s all been easy.

Haftings recalls many times “screeching for hours” when frustrated by failure to find solutions to engineering problems his studies presented.

He also found challenges in his leadership roles in student organizations.

In the end, surviving those trials by fire energized him.

His achievements include serving as an officer of the Fulton Schools Society of Water and Environmental Leaders; being a member of Tau Beta Pi, the premier engineering honor society; serving as an undergraduate teaching assistant and tutor; being a member of the Environmental Team for the ASU student chapter of the American Society of Civil Engineers; and becoming a platinum member of the Fulton Academic Integrity Matters student program.

Haftings credits Fulton Schools Associate Professor Treavor Boyer for motivating him by showing the varied possibilities of a career as an environmental engineer.

“It was inspiring to see how much he cared about environmental engineering and how willing he was to go the extra mile and get the class excited,” Haftings said.

Haftings will have Boyer as his graduate studies mentor as he pursues a master’s degree in environmental engineering through the Fulton Schools 4+1 program.

He completes his undergraduate years having made the dean’s list every semester and earning support for his studies from a Pell Grant, a University Grant and a Carl L. and Jean Wolcott Meng Memorial Scholarship.

As for career aspirations, Haftings says it would be amazing to help repair damaged environments in places where people have not had the resources to protect their communities.

Read about other exceptional graduates of the Fulton Schools’ fall 2020 class.

Every year, hundreds of future first-generation college students join Arizona State University's Hispanic Mother-Daughter Program, which for 36 years has provided skill-building, mentorship and community building around higher education for Arizona families. The program has reached thousands of parent-student teams since its launch and has contributed to the increased enrollment of resident Latin...

Every year, hundreds of future first-generation college students join Arizona State University's Hispanic Mother-Daughter Program, which for 36 years has provided skill-building, mentorship and community building around higher education for Arizona families. The program has reached thousands of parent-student teams since its launch and has contributed to the increased enrollment of resident Latina women at ASU. In 1984, there were 556 Latina students enrolled. As of fall 2018, that number increased to more than 7,000 Latina students.

Now the program has earned the support of a new partner: American Family Insurance. The organization based out of Madison, Wisconsin, has announced a two-year commitment to supporting the initiative for both programming as well as an endowed scholarship that will provide $5,000 a year to a Hispanic Mother-Daughter Program graduate who is attending ASU. 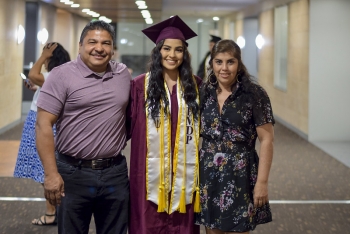 “While our goals include providing opportunities through internships, scholarships and apprenticeships, as well as recruitment of top and diverse talent, we want to do more,” Amundson said. “An equally important priority is community investment and engagement. The Hispanic Mother-Daughter Program is a great example of a program whose positive results are creating meaningful impact in the entire community, and one we’re proud to support.”

The student and family member participant teams, which receive support from seventh grade through high school graduation, participate in the Hispanic Mother-Daughter Program’s monthly workshops on ASU’s Tempe campus (and now virtually) addressing topics such as peer pressure, financial aid and preparing for high school. The program is open to students and parents of all genders, and programming is available in both English and Spanish to ensure accessibility to dual-language communities in Arizona.

Kassandra Mendoza, 17, is a Hispanic Mother-Daughter Program participant and a senior at Westwood High School in Mesa, Arizona. She said she joined because it was a chance for family connection and also great resources.

“I thought this program would be a good opportunity to surround myself in a community where students have higher education goals, and it would also mean spending time with my mother and my parents together,” Kassandra said.

Her favorite part so far was visiting ASU’s campus; she’s already applied to be a Sun Devil. Kassandra would be the first in her family to graduate from college and said money has been the biggest barrier to her education.

Kassandra’s mother, Veronica Mendoza, said it has been rewarding to learn so much together and also to connect socially with other parents through the program.

“I'm getting her involved with other people who have the same interest as she does in higher education,” Veronica said. “And I thought it would be good for us both to learn the steps together and what it would be like in the future for her.”

Mother and daughter agreed that the American Family scholarship is a great opportunity for Hispanic Mother-Daughter Program participants. Kassandra said receiving such support would help her concentrate on studies rather than, “worrying about how I will be funding my education.”

Veronica said it would be a leg-up for students to be successful.

“It would really just mean an opportunity for her to have a better life, to be able to go to school and finish it and accomplish what she sets as her goals,” Veronica said.

Marcela Lopez, a graduate of the program who went on to earn her degree at ASU and now helps lead the Hispanic Mother-Daughter Program as executive director of outreach for Access ASU, said the American Family gift will have an invaluable impact on the next generation of first-generation students and extend significant support into their college years.

“We are so honored to have the support of American Family Insurance for this high-impact program,” Lopez said. “I know firsthand how much it can mean to families to have access to the resources, information and support of the Hispanic Mother-Daughter Program. This support and scholarship will change these students’ lives.”