Di Russo earned her Doctor of Musical Arts degree in orchestral conducting from the School of Music, Dance and Theatre in spring 2020. 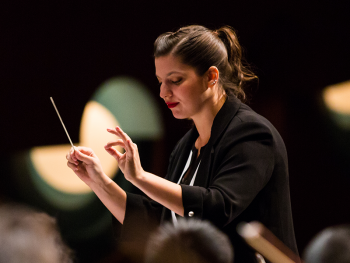 “These fellowships will make a difference in my professional career, the skills that I am developing and how I position myself as a conductor for future job opportunities,” Di Russo said.  “It seems more crucial now than ever to partner with such prestigious organizations to gain insight on how they, and I in the future, innovate and adapt to the changes in our industry.”

Project Inclusion is Chicago Sinfonietta’s groundbreaking program dedicated to changing the face of classical music by combining talent and mentorship to develop diverse and emerging musicians, conductors and arts administrators by eliminating institutional bias due to ethnicity, race and socioeconomic status.

The Dallas Opera Hart Institute for Women Conductors addresses the gender imbalance of leadership on the podium by advancing the careers of women in the most visible position in the orchestra. Since 2015, more than 500 female conductors from 40 nations have applied to be trained, advised and supported by the initiative. This year, 72 applicants from 17 countries applied as conductors or administrators, with seven women selected as conducting fellows. The two-week virtual residency includes masterclasses and presentations Feb. 8–19, 2021.

Di Russo said she previously applied several times to The Dallas Opera Institute Fellowship, only to be rejected after making it to the final round.

“When I found out I had finally made it, it felt like a dream come true and a rewarding lesson in determination,” Di Russo said. “Being recognized by this organization, and to be given the opportunity to work with gifted and renowned conductors, mentors and administrators, will definitely be a highlight in my career.”

Di Russo’s conducting career began in 2012 in Argentina while pursuing a degree in orchestral conducting. At the same time, she was part of a successful professional musical theater company and focused on a professional career as a dancer and singer in musical theater. A final exam in a conducting course required her to conduct Beethoven’s famous "Symphony No. 5 – First Movement."

“When I stood there and gave the first downbeat and felt the weight of the orchestra under my baton, I told myself, ‘This is it,’” Di Russo said. “After that moment, and even after being offered a national tour contract, I left the theater company to focus all my efforts into being the best conductor and musician I could be.”

Di Russo credits ASU for providing her a wide variety of tools to be competitive in the job market while preparing her to adapt and innovate in a rapidly changing profession.

“Michelle was the first DMA student that I accepted during my tenure at ASU, and I knew immediately during her audition that this was a special talent,” said Jeffery Meyer, director of orchestras and associate professor. “I also remember during our interview that she stated she wanted to change the world through her work on the podium. She is well on her way to doing that, and I could not be more proud of her work and development. I will follow her career with great joy.”

Under Meyer’s guidance for three years, Di Russo said, her studies and position as assistant conductor for the ASU Symphony Orchestra and other ensembles were crucial in gathering experience and knowledge on the podium.

Di Russo said she was also able to perfect her opera conducting by assisting Brian DeMaris, director of Music Theatre and Opera and associate professor, in several productions, including conducting Puccini’s "Suor Angelica" and as music director of the Opera Lab for two years. She also worked frequently with Tito Muñoz, music director of The Phoenix Symphony, throughout her degree program.

Her advice to students is to take the time to explore their passions and interests and have a variety of skills that will make them stand out from others and show them a path for success.

“My ASU professors – Meyer, DeMaris, Jason Caslor, Kay Norton and Daniel Bernard Roumain – helped me to believe in myself and see how, as a conductor, I can reach out beyond the podium and have an impact in our society and community,” Di Russo said. “ASU allowed me to witness firsthand the power that music has to send a message of unity and strength that lies in the diversity and uniqueness of human beings.”

Di Russo was also selected for the summer 2020 American Austrian Foundation Ansbacher/Farber Conducting fellowship  as part of the renowned Salzburg Festival, and has been a fellow in the Cabrillo Festival of Contemporary Music, the United States Army Band Pershing’s Own Workshop and Cortona Sessions for New Music in Italy.

ASU alumna excels as a champion for diversity, inclusion

Even as a child, Malissia Clinton knew that she wanted to be a lawyer.“I’ve never not wanted to be a lawyer,” said Clinton. “From my first memory it was something that I wanted to do.”The Arizona State University political science alumna was inspired by the work of her grandparents, Roy and Malissia Cooksey, who founded the Arizona chapter of the NAACP.  Her grandfather would serve as i...

ASU alumna excels as a champion for diversity, inclusion

Even as a child, Malissia Clinton knew that she wanted to be a lawyer.

“I’ve never not wanted to be a lawyer,” said Clinton. “From my first memory it was something that I wanted to do.” 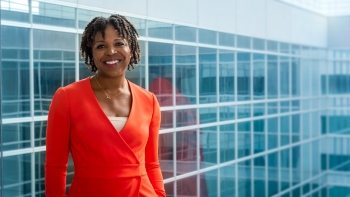 The Arizona State University political science alumna was inspired by the work of her grandparents, Roy and Malissia Cooksey, who founded the Arizona chapter of the NAACP.  Her grandfather would serve as its president for years and would also lead the civil rights division at the U.S. attorney’s office in Tucson, Arizona.

Upon graduating from Sunnyside High School in Tucson, Clinton applied to universities all over the country. Even though she was the valedictorian of her class, the cost of those schools proved to be too much. Through Arizona State University, Clinton was able to fully fund her education with academic scholarships.

“I knew, even at that age of 17, it was really important to me that I had economic independence and that I was self-sufficient,” Clinton said.

When she visited Tempe, she fell for the beauty of the campus.

“On the spot I decided that was where I was meant to go to school.”

Thinking that it was the best path to becoming a lawyer, Clinton decided to major in political science and would go on to get her JD from Stanford University.

Clinton has remained involved with ASU over the years through serving on boards such as the ASU Foundation Board, where she helps shepherd the process of raising funds for the university.

“Everything I am is because of the start that ASU gave me,” Clinton said. “I get choked up just thinking about it.”

In her high school senior year book, Clinton wrote that she wanted to be a corporate attorney. Now as senior vice president, general counsel and secretary for the Aerospace Corporation, Clinton knows this was the job she was meant to do.

“I love what happens with business — how they make a product and how they sell it. I enjoy being an enabler for that.”

With the company since 2009, Clinton’s work with the Aerospace Corporation has not gone unnoticed. She was recently named the Los Angeles Business Journal’s 2020 Leaders in Law – Nonprofit Leader in Law of the Year winner.

“I was honored and humbled,” said Clinton, who gave thanks to the Aerospace corporate communications department. “But I am also pleased that the story they were able to tell about the work we do and the law the department’s influence merited such a high recognition.”

Beyond her position with the Aerospace Corporation, Clinton is on a number of boards, including most recently being appointed to the board of directors at Progyny, Inc. — a fertility benefits management company. She was drawn to Progyny because, according to Clinton, they have a business model where everybody wins. She added that she is looking forward to helping Progyny with their environmental, social and corporate governance initiatives.

“That is a sweet spot for me. I’m very much into diversity and inclusion,” Clinton said. “I feel like I have a duty on these boards to bring those issues forward and to help the company be a better corporate citizen.”

Four years ago, Clinton gave a Tedx talk telling the story of when someone lit a tire on fire and threw it through the front door of her home in Manhattan Beach. Initially deeming the firebombing as neither arson or a hate crime, the authorities followed up by calling in Clinton’s husband for a polygraph test. Concerned, frustrated and humiliated, Clinton and her family decided they would move.

“Sure we knew that we were giving in to hate,” said Clinton in her talk, “but keeping our kids safe came first so if we were being asked to go – we’d go.”

When she notified her book club that she was planning to move, the community swiftly rallied around Clinton and her family. Within 48 hours of the fire, the community had reached out via phone and email, organized a crowdfunding site, and the police chief and fire captain arrived at their house asking for a do-over. Seventy-two hours after the incident, a vigil was held in the town square, where the community pleaded the family to stay.

“I thought the firebombing was bad, but it’s easy for us to convince ourselves it was isolated … and then you have a year like this,” said Clinton, reflecting on 2020. “It exposes the racial wound that still beset our country but I think that exposure is important to meaningful progress.”

Clinton shared that the past year has taught her that having hope and staying positive is key during difficult times. The exposure to challenges like race relations is only the first step. Clinton says we continue to struggle with these issues because we have not put in the work.

“I think that what one does for the blended ‘underrepresented minorities’ will not solve the issues that African Americans deal with,” Clinton said. “That’s why they exist still. I think they are unique and entrenched.”

Being on ASU’s Foundation Board has given Clinton the opportunity to hear what the university is doing on their diversity measures. She shared that she is interested in seeing what ASU does for their African American students, faculty and employees.

“I’ve had these discussions with President Crow and I am anticipating that he will take his amazing gift at being a change agent and revolutionize what is being done at the university level to deal with these issues.”