Three current Sun Devil men's golfers and one signee from the fall of 2020 class have advanced to the 64-person match play bracket at the Maridoe Amateur Championship.

Think of a long, strategy-based board game. If you want to win Monopoly, you need a plan, and your path to victory depends on a series of sequential plays. Strategy is key in new findings published by Arizona State University applied mathematician Adam Lampert. Along with co-author Andrew Liebhold from the USDA Forest Service, he set out to find the best way to keep invasive insects under control...

Think of a long, strategy-based board game. If you want to win Monopoly, you need a plan, and your path to victory depends on a series of sequential plays.

Strategy is key in new findings published by Arizona State University applied mathematician Adam Lampert. Along with co-author Andrew Liebhold from the USDA Forest Service, he set out to find the best way to keep invasive insects under control using multiple methods. To “win” or successfully control an invasive species, managers need to closely monitor the effectiveness of each method and build off successes of previous methods. 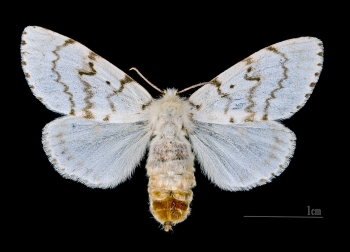 The findings show the effectiveness of some tactics depends on the density of the insect population, and that some eradication tactics work well when combined, while others do not.

Lampert, an assistant professor in ASU’s School of Human Evolution and Social Change, uses his knowledge in applied math for life and social sciences to create mathematical models that project populations over time. He analyzed the gypsy moth in the United States as a case study for this work.

Introduced to the U.S. in the 19th century, the gypsy moth causes intense damage to native foliage. They’ve even decimated large forested areas in northeastern U.S.

While many studies have analyzed a single eradication method, or even several methods used at the same time, few have mathematically modeled long-term, sequence-based plans to eradicate invasive pests.

Lampert and Liebhold created a model that considers three different techniques for combating the spread of species like the gypsy moth: pesticides, sterile males and hormone disruption. The model also takes into account factors like the growth rate of the population, the cost of insect damage and the cost-effectiveness of the treatment methods.

Pesticides are commonly used for quickly decreasing an existing insect population. They are generally very effective, but often, enough insects survive to continue reproducing and rebuilding the population. Managers can reapply pesticides, however, it is still likely that some insects will survive and reproduce, so the cycle continues.

Two additional tactics make it less likely that females will produce viable eggs, which decreases population growth. Managers can release sterile males into the wild to compete with feral males, or managers can distribute mating pheromones in the moth’s habitat, making it harder for males to find females.

The model shows pesticides are most efficient on large insect populations, whereas the two mating disruption techniques are more efficient in smaller populations.

In ecology, there is a concept called the Allee dynamic. This refers to the population size of a species and its ability to reproduce and grow. It is often not feasible to entirely eradicate insects using human tactics alone. If managers can get the population below a certain level — the Allee threshold — then it would be unlikely to reproduce enough to carry on naturally.

Consider a four-year invasive insect management plan, using three methods to control the species. (These population numbers are exaggerated and hypothetical to illustrate the concept.)

One key takeaway from this research is the importance of considering long-term management plans that consist of multiple eradication strategies. Lampert hopes entomologists and land managers will utilize this strategic approach to control invasive insects.

This model was built around a species that only reproduces one time every year. In the future, Lampert would like to create similar models with different parameters, hoping to describe treatment methods for eradicating other invasive insects.

The paper “Combining multiple tactics over time for cost-effective eradication of invading insect populations” was published in November in Ecology Letters.