Born and raised in Scottsdale, Arizona, Jonah Ivy spent his first six semesters intentionally exploring different courses that Arizona State University had to offer. It wasn’t until he participated in the School of Civic and Economic Thought and Leadership’s Global Intensive Experience in India that he declared a major in civic and economic thought and leadership. 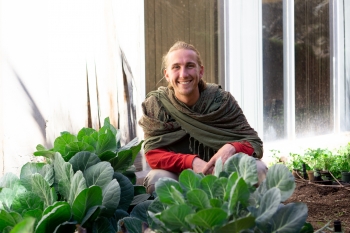 “I had already traveled quite a bit, and I hadn’t seen any other study abroad opportunities that were like (the school's) India trip,” Ivy said. ”They immersed you in a new culture.”

As for the “aha moment” that helped Ivy realize what he wanted to major in, it came down to one thing: “(The faculty) believed in me. When I said I wanted to create change in this world they didn’t say ‘Well, how are you going to do that?’ they said ‘Alright. If you’re going to do it, let’s figure it out.'”

During his time at ASU, Ivy did create positive change, both on campus and in the community.

Ivy can be credited with the thriving garden on the perimeter of the Social Sciences building on the Tempe campus. He instituted a student garden club called Food For Change with a mission to educate and empower students to engage in all aspects of the local food system. Food For Change supports and promotes food initiatives on and off campus with the goal to bring awareness to the local and national food movement.

“I’m really using this food system change as a multidimensional approach to the complex solutions of the world like climate change, food insecurity and population growth,” said Ivy.

But Ivy’s passion doesn’t stop there — he also worked an internship and continues to volunteer with the TigerMountain Foundation in south Phoenix.

Ivy was drawn to the TigerMountain Foundation because of its mission to empower communities to better themselves from within by beautifying vacant lots, planting community gardens and selling and marketing what they grow at farmers markets. According to TigerMountain Foundation’s website, south Phoenix has one of the highest recidivism (return to jail) rates in the nation. They are working to reverse this problem through their community gardens and landscaping initiatives.

As for his plans after graduation, Ivy wants to continue working to make positive changes in communities with other changemakers.

Ivy will be graduating with his bachelor's degree in civic and economic thought and leadership and is The College of Liberal Arts and Sciences Dean’s Medalist for the School of Civic and Economic Thought and Leadership. The school caught up with him to ask about his time at Arizona State University.

Question: What is your favorite spot on campus?

Answer: (The Social Science garden) is the first place I realized the true power of community. I realized that when we pursue things we should use them as a means to create community rather than using the community to accomplish something. That’s what this space taught me.

Q: What professor taught you the most important lesson at ASU?

Q: What is a piece of advice you would give to those still in school?

A: The advice I’d give to students still pursuing a degree is to have faith in community, have faith in love, have faith in truth and knowledge because those are the things that you’ll need to succeed in life.

It has been more than 50 years since Roger Detter, then the captain of the Sun Devil baseball team, guided the Sun Devils to their second College World Series title in three years. He remains very proud of his alma mater. ... It has been more than 50 years since Roger Detter, then the captain of the Sun Devil baseball team, guided the Sun Devils to their second College World Series title in three years. He remains very proud of his alma mater.