Double major is ready to continue traveling the world

Fall 2020 graduate Monica Orillo has developed an awareness of ASU as “a truly global community” through her language classes in the School of International Letters and Cultures and her studies abroad in Germany and the Philippines. 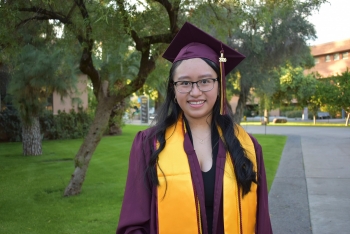 Fall 2020 graduate Monica Orillo will be putting her degrees in political science and German to good work after graduation as she participates in an internship with Phoenix Sister Cities before spending a year in Germany as part of the prestigious Fulbright English Teaching Assistant Program. Download Full Image

Orillo first studied abroad in 2015–2016 after graduating high school. She participated in the U.S. State Department’s Congress-Bundestag Youth Exchange Program in Germany, which led her to add a minor in German when she came to ASU to major in political science.

Midway through her studies, she returned to Germany to intern with the State Department’s Foreign Service at the U.S. Consulate in Frankfurt in 2018. Later that year, she traveled to the Philippines – where both her parents are from – to study abroad for a year in Manila on a Boren Scholarship, which is funded by the National Security Education Program and overseen by the U.S. Department of Defense.

“I am grateful to have had so many study abroad experiences as a student, and I’m very passionate about the value of cultural exchange in encouraging people to be more globally minded,” she said.

While at ASU, Orillo participated in a number of extracurricular activities on and off campus. She was the secretary for the Make Your Impact club, a student organization dedicated to promoting service through the Peace Corps and other national service organizations. She later became an official Peace Corps campus ambassador through an internship assisting the Peace Corps campus recruiter. She also worked as a change agent at Changemaker Central on the Tempe campus.

For the last three semesters, Orillo has served as a junior research fellow at the Center on the Future of War, which is part of the School of Politics and Global Studies. In that fellowship, she conducted research with an investigative journalist in Manila who is affiliated with the New America think tank in Washington, D.C.

Orillo also applied her language learning knowledge in several tutoring positions. Early in her academic career, she taught English to adult language learners at a Phoenix refugee resettlement center through Lutheran Social Services of the Southwest. While in the Philippines, she tutored young children in English, and for the last year, she has worked with an organization called Paper Airplanes to help adult Syrian refugees learn English.

Every semester, departments and schools within The College of Liberal Arts and Sciences honor an outstanding graduating student as their Dean’s Medalist. Orillo was recently named the recipient of the Dean’s Medal for the School of International Letters and Cultures after previously being honored by the German Department as its Outstanding Student of the Year in 2017–2018, before she’d even declared a major in German.

“This award was truly unexpected,” Orillo said. “Looking back, I recognize my classes in (the school) as some of the most enriching, fun and intellectually stimulating courses of my ASU education. I feel honored to have my accomplishments recognized and to be representing (the school) in this way, and I am beyond grateful to have been in such an awesome learning environment.”

Associate Professor of German Daniel Gilfillan nominated Orillo for the award after teaching her in several classes and working with her on an independent study research project this semester about German-language literature and film made by and about migrants of various backgrounds.

“Orillo has produced outstanding work that speaks to a desire to understand complex sociopolitical issues from the fuller perspective that study of a second language and its cultural knowledge affords,” Gilfillan wrote in his nomination letter. “She is a deep thinker, intuiting complex connections that others may have trouble seeing, and is then able to articulate these ideas to a more novice audience, such that learning occurs on many levels.”

Orillo will be graduating with a Bachelor of Arts in political science, a Bachelor of Arts in German, and a certificate in Teaching English to Speakers of Other Languages, commonly known as TESOL. She was originally planning to graduate in May 2020, but chose to stay at ASU for an extra semester to complete enough classes to turn her minor in German into a second major.

In 2021, Orillo will be completing an internship at Phoenix Sister Cities as the assistant to the vice president. In September, she will travel to Germany once again, this time as part of the prestigious Fulbright English Teaching Assistant Program.

After that, she hopes to stay in Germany to pursue a graduate degree in peace and conflict studies, with the goal of someday working in the field of international education or public diplomacy. Her studies at ASU have prepared her well for the next chapter of her life and provided her with many opportunities to see the world and meet people from a variety of backgrounds.

“I love how diverse the SILC community is!” Orillo said. “It seems obvious that the school with foreign languages would be diverse linguistically and culturally, but I also had the opportunity to meet so many interesting students and professors from many different walks of life.”

Editor's note: This story is part of a series of profiles of notable fall 2020 graduates.When most people think about analytics in sports, they consider stats like free throw percentages, fourth down conversions, or home run exit velocity. But W. P. Carey Outstanding Graduate Student Jeff Luczak (MS, business analytics) saw a whole other side to analytics in sports.“I was working in sales for ...

When most people think about analytics in sports, they consider stats like free throw percentages, fourth down conversions, or home run exit velocity. But W. P. Carey Outstanding Graduate Student Jeff Luczak (MS, business analytics) saw a whole other side to analytics in sports. 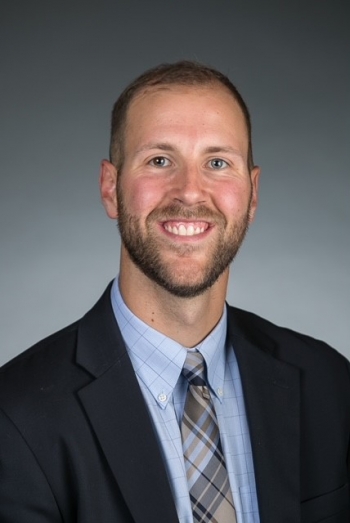 “I was working in sales for the Phoenix Suns when I started having conversations with individuals in analytics at both the Phoenix Suns and Indiana Pacers," he said. "The ability to tackle complex problems and drive decisions that impact the bottom line was very exciting to me.”

Luczak knew he wanted the next step in his career to focus on using analytics to drive business decisions, so he decided to return to school for his master’s degree in business analytics. While maintaining a 4.0 GPA throughout his program, he additionally completed analytics internships at Nexant and Women in Technology International. While his curiosity and aptitude pushed him through his studies, Luczak's true passion lies in building community with his ASU peers. He has been extremely focused on improving the relationships with his colleagues, and planned events spanning across graduate programs prior to the pandemic. Luczak truly understands success comes not just from crunching numbers, but also creating relationships and sustaining connections.

We caught up with the soon-to-be grad to learn more about his experience.

Answer: I wouldn’t attribute one thing to changing my perspective, but countless. The reason I enjoyed the MSBA program was due to being able to work in cohorts on countless projects. This opened my eyes to different viewpoints from my classmates and continued to challenge how I tackle problems.

A: I chose ASU after hearing about the reputation of W. P. Carey and seeing their rankings. I knew a W. P. Carey degree would help me take the next step.

A: Expose yourself to as many people and opportunities as possible. By building up your skills and network you set yourself up for success in the short and long term.

A: Most of the time I was in school, I was working at ASU for the School of Mathematical and Statistical Sciences. With this, I had access to some of our conference rooms and would utilize these rooms at night to study.

A: I will be working in data analytics for a health care or technology company. I currently have a few offers I am considering and am excited to apply my skills to real-world problems.

A: I don’t believe $40 million dollars would be enough, but I would like to tackle climate change. If we don’t take care of our planet, there will not be much left for those that come after us.