Although she’s just 15 years old, Arizona native Carly Cairns chose to spend her first few months after graduating high school studying ancient Greek and Latin at Arizona State University. She’s currently enrolled as a nondegree student as part of a gap year before she officially begins her college career in fall 2021 at the University of Chicago.

Cairns said her decision to dive into language classes through the School of International Letters and Cultures, even though they won’t count as academic credits toward her future degree, was fueled by her passion for lifelong learning. 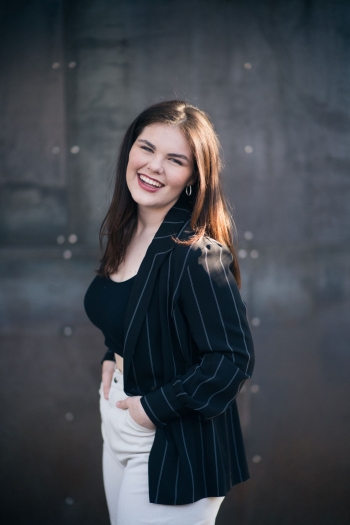 Arizona native Carly Cairns is taking ancient Greek and Latin courses at ASU as part of a gap year before transferring to the University of Chicago. But Cairns is a little different from your typical nondegree student — she is just 15 years old. Download Full Image

“Every experience is unique to the person, and it just comes down to what your priorities are. For me, that was academic challenge. For others, it may be a robust social scene, or a strong athletic culture,” Cairns said. “Everyone’s academic journey comes in all shapes and sizes."

Her journey began at age 10, when she enrolled in the Gary K. Herberger Young Scholars Academy, based on ASU’s West campus. Cairns advanced through the school’s Middle Years curriculum in just one year, moving on to the Cambridge IGCSE coursework at age 11 and the A-level program after that. In the process, she became the youngest student in the U.S. to receive a Cambridge AICE Diploma, though that was never her goal.

“I hadn’t really sought to finish at a young age. I was just seeking a challenge and a good fit,” Cairns said.

After graduating from the Herberger Young Scholars Academy in May just weeks after her 15th birthday and being named class valedictorian, Cairns resumed her ASU studies as a nondegree seeking student in the Zoom classrooms of Paul Arena and Sarah Bolmarcich, both lecturers in classics.

In Bolmarcich’s elementary ancient Greek class, students learn elements of ancient Greek grammar and apply their skills to read ancient Greek texts. Bolmarcich said she’s taught high school students before who were 17 or 18, but never someone as young as Cairns or as advanced in their academic career.

“Carly's one of the best students in the class, meticulous in her work and often asking for extra tips on how best to learn difficult Greek constructions,” Bolmarcich said. She noted that Cairns’ young age provides her with a head start on many of her peers. “It gives her a few extra years in life to enjoy this most beautiful of languages!”

Cairns credits the support system of her family for her success. She was raised by a single mother and also has a close relationship with her grandfather, a constitutional law professor. They have helped her continue to challenge herself academically. When she’s not busy with her studies, she enjoys watching action movies with her family as well as playing the guitar and piano and acting in theater productions.

In the spring, Cairns plans to continue her Greek studies and tackle an online writing class to better prepare her for her undergraduate coursework. After her year at ASU, she’ll pick back up at the University of Chicago, a school she chose for its rigorous curriculum and strong focus on the liberal arts. She’s also excited to move across the country and experience a new environment, though she’s a little familiar with the city already thanks to a summer program at Northwestern University.

Cairns' current academic interests include history, democracy, criminal justice and constitutional law. She hopes to attend law school some day and her dream job would be to serve as a federal prosecutor for the Southern District of New York, which would put her at the forefront of some of the country’s most important cases.

But all that is a few years in the future, though at her learning pace, perhaps not as far off as some might think. In the meantime, Cairns has third-declension Greek nouns to worry about, and she knows she might adjust her path as she discovers new academic passions.

“I am prone to changing my mind often,” she said. “I think a broad liberal arts undergraduate experience will help me to explore and refine my interests. It’s exciting, really, and I definitely have time on my side.”

School of Earth and Space Exploration faculty to lead one of eight projects, participate in three more

Faculty from Arizona State University’s School of Earth and Space Exploration are leading one of the eight NASA-selected projects, and they are participating in an additional three more. 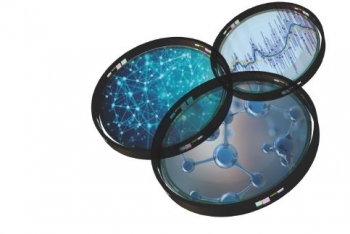 “One of the biggest challenges we must confront in our search for life in the universe is to identify life’s universal signatures and develop quantitative tools that allow us to recognize these in alien environments,” said Walker, who is also the deputy director of ASU’s Beyond Center. “Our project will advance multivariate statistical approaches to astrobiology, combining complex systems science with big data and experiments to develop next-generation biosignatures that will provide new tools to not only recognize life as we know it, but also as we don’t know it.” Project deputy principal investigator Kim adds, "The ultimate goal of our project is to develop quantitative frameworks and rigorous mathematical tools for understanding the universal principles underlying biological systems across diverse planetary environments."

In addition to being on the Planetary Systems Biochemistry team, Anbar is also the deputy principal investigator on a second ICAR-award project “What Life Wants: Exploring the Natural Selection of Elements,” led by principal investigator Betül Kaçar of the University of Arizona. This project seeks to understand the essential attributes of life and the ways in which they shape our notions of habitability and the search for life on other worlds.

“Our team will explore the natural selection of the chemical elements during the coevolution of life and environment on Earth, focusing on metal use in the biological nitrogen (N) cycle,” said Anbar. “We will carry out geochemical and biological investigations that involve ancient materials, experiments and modern natural systems.” 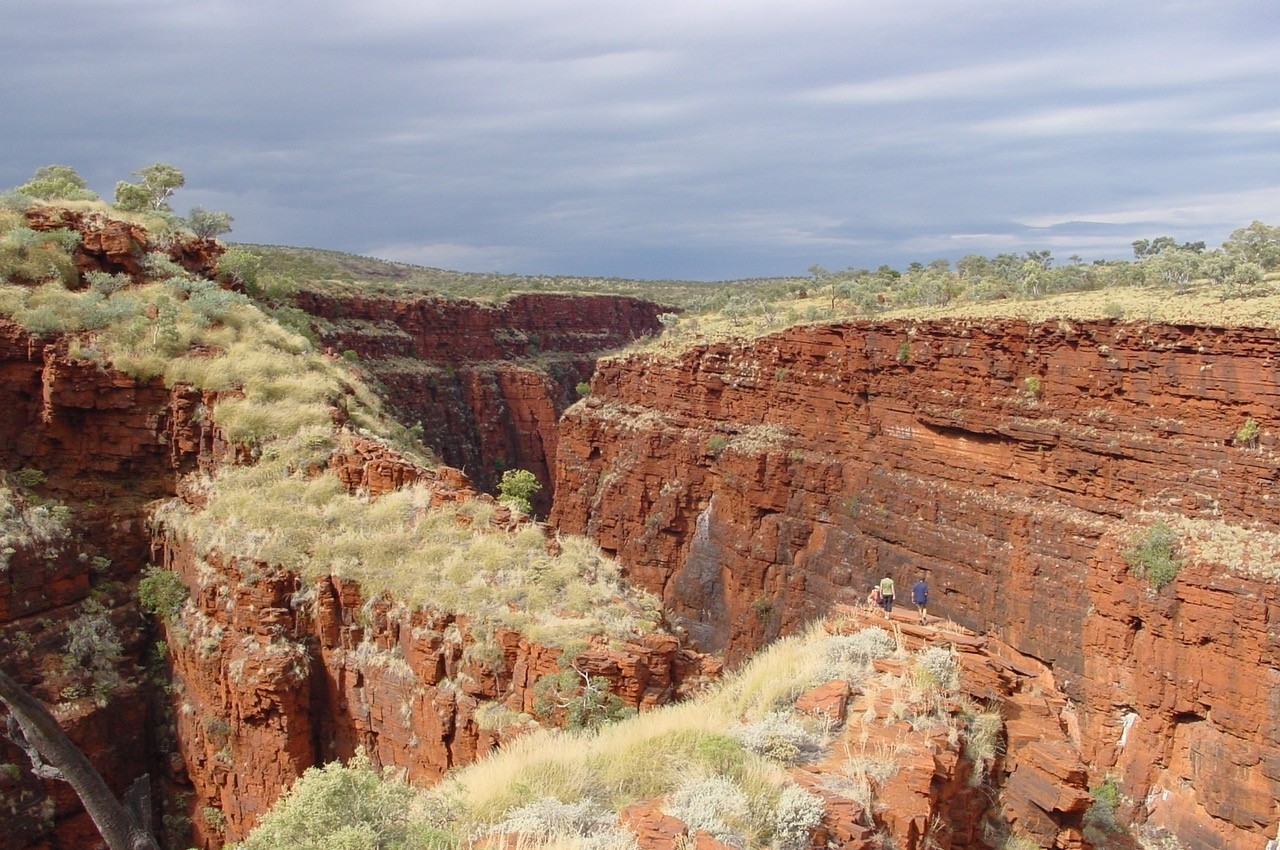 Sedimentary rocks like these from the Hamersley Basin in Western Australia, deposited billions of years ago, tell us about changing availability of metals in Earth’s oceans and will be studied by the “What Life Wants: Exploring the Natural Selection of Elements” team, which has been awarded a NASA ICAR award. Photo by Ariel Anbar/ASU

"We aim to develop a holistic view to accurately assess the habitability of rocky planets in the habitable zone of M stars, including the characterization of the host stars, which affect the planet’s atmospheric formation, evolution and chemistry,” said Shkolnik. “This project is a natural next step to our longtime observational efforts to study M stars, which are the most prevalent hosts of rocky planets.”

And a fourth project, “Alien Earths: Which Nearby Planetary Systems Are Likely to Host Habitable Planets and Life?” includes co-investigator Maitrayee Bose. It is led by Daniel Apai of the University of Arizona and seeks to advance our understanding of which nearby planetary systems may harbor habitable worlds. Bose will lead cosmochemical studies of meteorites, left over from the young solar system, to help understand water delivery during the formation of planetary systems.

The goal of NASA’s Astrobiology Program is the study of the origins, evolution and distribution of life in the universe. The program is central to NASA’s continued exploration of our solar system and beyond, and supports research into the origin and early evolution of life, the potential of life to adapt to different environments, and the implications for life elsewhere.

ICAR is a new organizational structure for the NASA Astrobiology Program, developed over time to meet the needs of a rapidly evolving field with an expanded scope and emergent questions driven by two decades of research and discovery in astrobiology. The program supports an interdisciplinary approach to a single compelling question in astrobiology, collectively addressing the goals of the agency’s Astrobiology Strategy.

“We are excited about these additions to the astrobiology research portfolio,” Lori Glaze, director of NASA’s Planetary Science Division, said in a NASA press release announcing the awards. “The astrobiology community continues to grow and is increasing their contributions to planning and implementation of NASA’s Science Mission Directorate flight missions. These new teams are central to ensuring astrobiology goals are cohesively integrated into those future missions.”