Breaking down the data behind a record-breaking summer in Arizona

Explore historic temperatures from the 1890s to the present

Patio weather is officially here, but Arizona will not soon forget the scorching summer months. This year, Arizona broke several temperature records, and Phoenix saw its hottest summer since 1895.

The historic temperature visualization developed by Arizona State University's Knowledge Exchange for Resilience is a tool that shows shifts in temperatures using an interactive heat map and bar graph. It includes historical Arizona temperatures from the 1890s to the present. 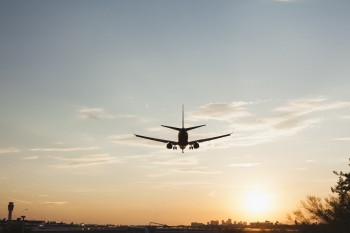 Some of the most significant data points and trends:

"The raw data from the Arizona State Climate Office features 130,000 traces of daily temperature data spanning across three cities over 130 years. It was challenging to transform such an extensive data set into a useful visualization,” said the lead scientist for the tool, Assistant Research Professor Sarbeswar Praharaj, PhD with the Knowledge Exchange for Resilience.

“It was essential to stay grounded in science, make it visually appealing and easy to use for our stakeholders and community,” he added. 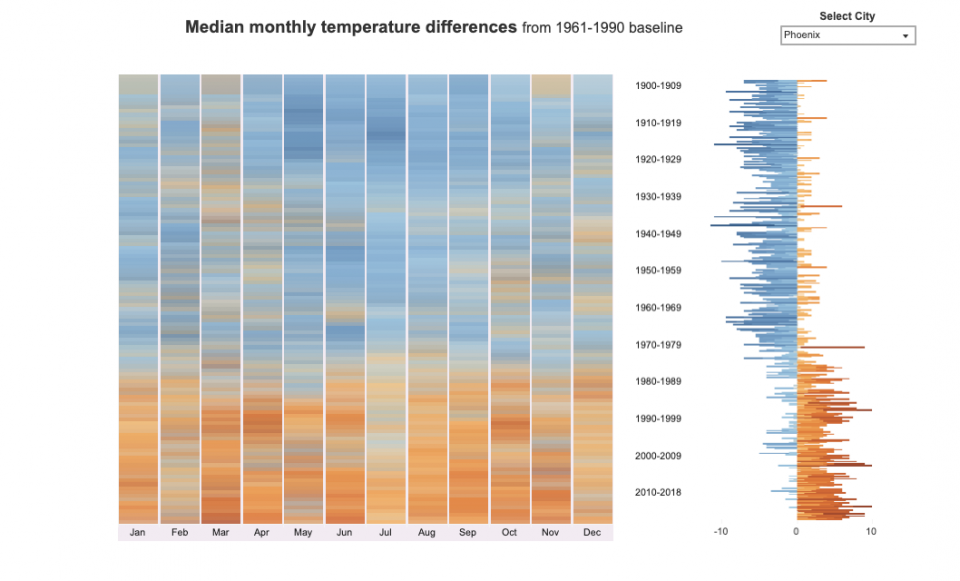 The warm and cool color palette highlights the degree of temperature changes from the baseline number. The data is organized by month, which shows changes over a calendar year and allows users to travel back several decades or just to last summer.

The rise of Phoenix

“The shift in colors from blue to red shows a significant change in temperatures starting in the 1970s,” said state climatologist Nancy Selover with the Arizona State Climate Office.

A tower at Sky Harbor airport collects weather data for the city of Phoenix. The transformation of the airport represents the story of a city growing a new identity.

In the 1930s, the rural airport that would become Sky Harbor was nicknamed "The Farm," and surrounded by agriculture. A few decades later, the airport and city would explode with urban development. 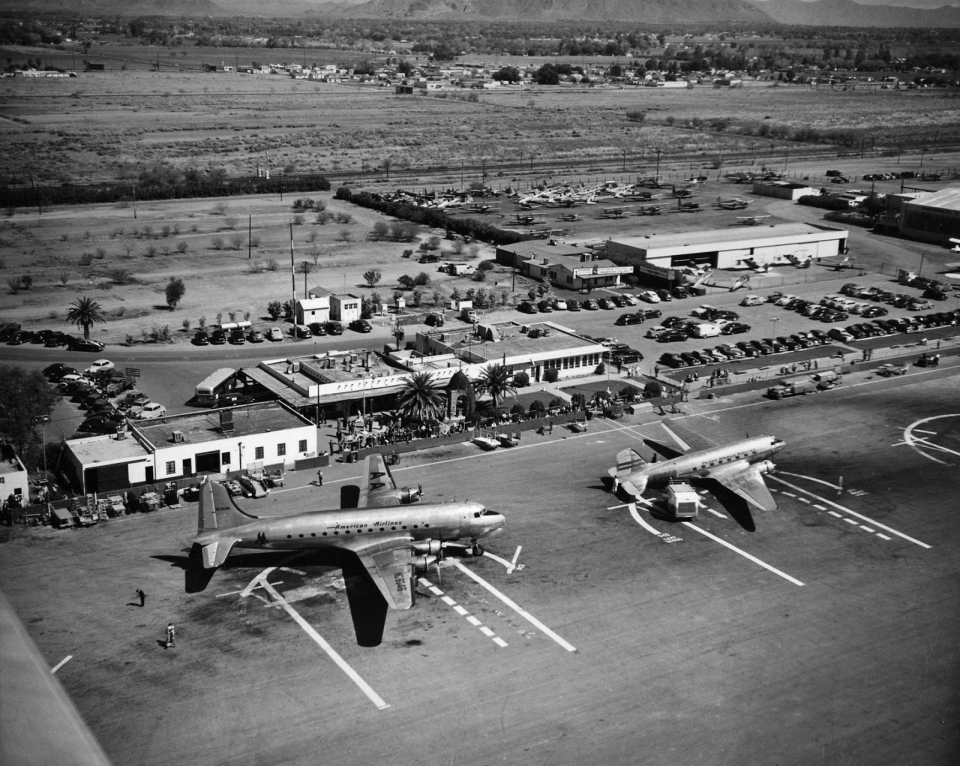 "The city started to take off in the early '70s, and then the building of I-10 during the '80s allowed people to start moving farther away from their jobs and pushed even more development," Selover said.

New houses, tall buildings and dark pavement would become the new normal. Rapid urban growth would create impacts on heat and temperature for decades to come.

Changes in the landscape and use of materials

The heat-island effect is one critical contributor to the heat.

"In the natural desert, you will see desert sand turf surfaces at 150 to 180 degrees Fahrenheit. When you go down 4 or 5 inches, it's back to the 80s and much cooler," Selover said.

Natural surfaces like vegetation, sand and desert turf have more airspace between them. The heat stays in the top few inches of the soil or surface.

"As the sun goes down, the soil starts to cool immediately. All the heat starts to come back up and dissipate. And within 15 minutes, you walk barefoot on the sand — no big deal," Selover said.

On the other hand, dense material like asphalt or concrete holds molecules tightly in place. When the top surface gets hot, the vibrating molecules will travel far and fast.

"With concrete or asphalt, it takes all night long for the heat to come back out. As the heat continues to go back out, it's heating the air above it too, so it doesn't ever get cool overnight," she added.

Arizona had 29 record-breaking morning temperatures of 90 degrees or warmer this year.

Weather experts anticipate Arizona could break even more records this year with lingering heat and lack of rain. Typically, high-pressure movement from Mexico brings moisture and monsoon rain. In 2020, Arizona saw a dry summer and current forecasts show a dry winter nearing too.

“The mild winters and ample sunshine in the Phoenix area continues to be an asset that continues to attract and retain residents. As temperatures continue to rise and rainfall decreases, these climate assets could become a hazard to human health, economic security, plant life, and the overall health of the community," said Elizabeth Wentz, vice provost and dean with the ASU’s Graduate College and director of the Knowledge Exchange for Resilience.

Rising temperatures and lingering heat mean reliable data and heat planning will be critical for a resilient future.

"The visualization data clearly demonstrates the urgent need to address the problem of increasing urban heat due to climate change. KER is designed to lead efforts that provide solutions to the impact of such pressing problems. KER's efforts in the Phoenix metro area will also benefit communities across the United States and around the world,” said Peter Schlosser, vice president and vice provost with ASU’s Julie Ann Wrigley Global Futures Laboratory.

To explore the KER Temperature visualization, visit resilience.asu.edu/temperature. All of the maps and graphs are free to download and use for educational purposes with proper citation.

Amid new challenges posed by COVID-19, states struggled to increase their census self-response rates in 2020. Widely considered the most accurate method used in this once-in-a-decade population count, these rates stagnated nationwide around 67% and only reached 64% in Arizona, ranking 32nd nationally. In 2010, the census undercounted an estimated 16 million people nationwide. Assessing the 2020 c...

A new dawn for supercomputing at ASU

Donating personal data could be the new frontier in philanthropy

Amid new challenges posed by COVID-19, states struggled to increase their census self-response rates in 2020.

Widely considered the most accurate method used in this once-in-a-decade population count, these rates stagnated nationwide around 67% and only reached 64% in Arizona, ranking 32nd nationally. In 2010, the census undercounted an estimated 16 million people nationwide. Assessing the 2020 census, the Urban Institute estimates up to about 100,000 Arizona residents might be missed. This year census workers had about three months — as opposed to the usual five — to follow up with those who hadn’t already responded online, by phone or by mail. These counts are already less reliable than self-responses, as their accuracy depends upon a resident being home, in addition to being able to understand and willing to respond to the census worker’s questions.

And accuracy matters. Census counts are used to determine Congressional representation, draw local political districts and allocate more than $650 billion of federal funding each year. The Arizona Complete Count Committee estimates that every resident not counted represents an annual loss of $887 in federal funding for education, transportation and social services.

“Certain populations like renters, people of color, young children, rural and Indigenous communities are all typically undercounted,” said Patricia Solis, executive director of Arizona State University's Knowledge Exchange for Resilience. For these populations, an undercount can mean 10 years of underrepresentation and underfunded services.

Although Arizona as a whole exceeded its 2010 self-response rate, the rates varied widely among counties and census tracts.

The 2020 Census Response Rates for Arizona map, developed by the Knowledge Exchange for Resilience with support from Geospatial Research and Solutions and using a data feed from the U.S. Census Bureau, depicts self-response rates for each Arizona census tract. 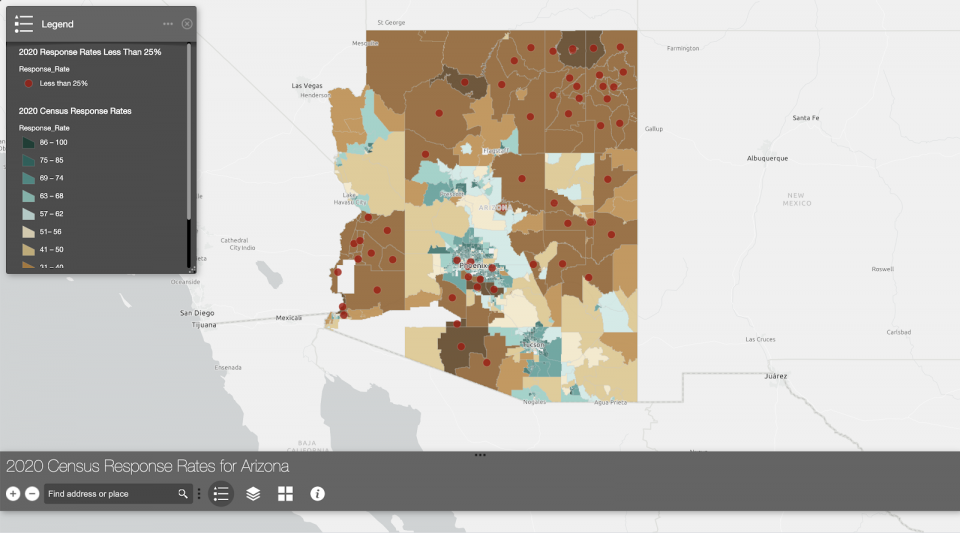 “We wanted to be able to track in real time what areas of Arizona were having good response rates and which weren’t so that it would enable us to work with community partners in particular areas to encourage their residents to complete the census,” said Lora Phillips, postdoctoral research scholar for the Knowledge Exchange for Resilience.

The map includes layers depicting response rates from 2010 and 2020 and a layer highlighting which census tracts achieved a rate of 25% or less.

“Looking ahead, it’s going to really benefit us to have in 2030 two previous data points and be adding a third, so we can see trends in certain neighborhoods,” she added.

“The next step is to start adding other data layers that might help explain the trends that we’re seeing,” said Shea Lemar, geographic information system senior project manager at ASU’s School of Geographical Sciences and Urban Planning.

“Being able to compare these response rates over time will really help us make a plan and be more successful in completing the next census,” Phillips said.

Beyond the direct impact it has on Congressional representation and federal funding allocation, improving the accuracy of census counts influences planning and decision making in every sector.

In January, the Knowledge Exchange for Resilience hosted the 2020 Census Matters Symposium, gathering leaders from across the state and the country to discuss the local impact of the decennial census. Journalism professionals spoke to the data’s importance as a demographic baseline for fact-checking, while nonprofit leaders noted how it could be used to supplement grant proposals to address community needs.

In the Arizona Office of Economic Opportunity, census counts are used to inform population estimates and projections.

Researchers and academics, too, rely heavily on census data. “Having access to more accurate census data means that we as scientists are able to improve our understanding of the kinds of needs, shocks and stresses our communities are experiencing,” Solis said.

“Professionals of all fields utilize census data all the time to make the world better for their citizens,” Lemar said. “It is one of the most important data sources in the United States.”