Xavier Jenkins’ alarm goes off at 5:30 a.m. on a Saturday morning. The Arizona State University student and his roommate Ben Kligman quickly get ready and head to the dining hall to stock up on essential supplies for the day — granola bars, lunch meat, four liters of water and most importantly, black coffee. Along with other interns, they stop by the paleontology lab to pack their field gear — hand tools, plaster and other excavation equipment.

There are seven people headed to the dig site. It’s almost an hourlong car ride along a dirt road to their destination: Thunderstorm Ridge, located in Petrified National Forest. This fossil excavation site was discovered a few years ago. Made up of soft gray dirt and rocks, it’s rich in tiny micro invertebrate fossils that lived in a tropical or semitropical climate approximately 220 million years ago. 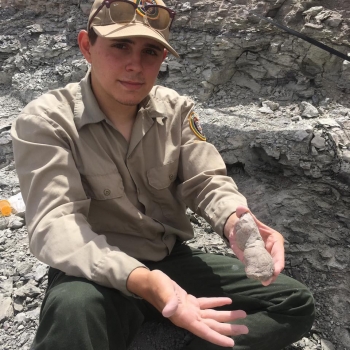 The interns, researchers and park staff spend the whole day out in the field, gathering material to be analyzed the same day at the on-site lab. Jenkins appreciates the rarity of this luxury, noting how paleontologists often wait weeks or even months to properly process their field material.

Back at the lab, Kligman and Jenkins work together analyzing what was brought in from the field. At Thunderstorm Ridge, they collect sections of rock and sediment, because many fossils are too small to see with the naked eye. Jenkins analyzes the material under a microscope.

Kligman excitedly rushes over to show Jenkins a “big” claw mixed in with the material brought in from the field. The 2-centimeter claw is larger than most fossils found at this site — even bigger than jawbones of some of the other species uncovered at Thunderstorm Ridge.

Equipped with a solid understanding of dinosaur bones, both Jenkins and Kligman knew instantly that this claw belonged to a member of the drepanosaurid family, but they didn’t know it belonged to a previously undiscovered species.

Jenkins had helped discover this new species of dinosaur-like creature. The species is now called Skybalonyx skapter and was small, about a foot long, with a special claw that distinguishes it from other species in the drepanosaurid family. The discovery and analysis was published in October in the Journal of Vertebrate Paleontology.

Jenkins graduated from ASU in May 2020, with Bachelor of Science degrees in anthropology from the School of Human Evolution and Social Change and biological sciences from the School of Life Sciences. The summer after his junior year, Jenkins completed a 12-week paleontology internship at Petrified Forest National Park.

“Even though living on-site was pretty isolating, almost every week a new university came in to conduct research,” Jenkins said. “Big-name paleontology professors visited to work on their own research, and I could help them and network the entire time.” 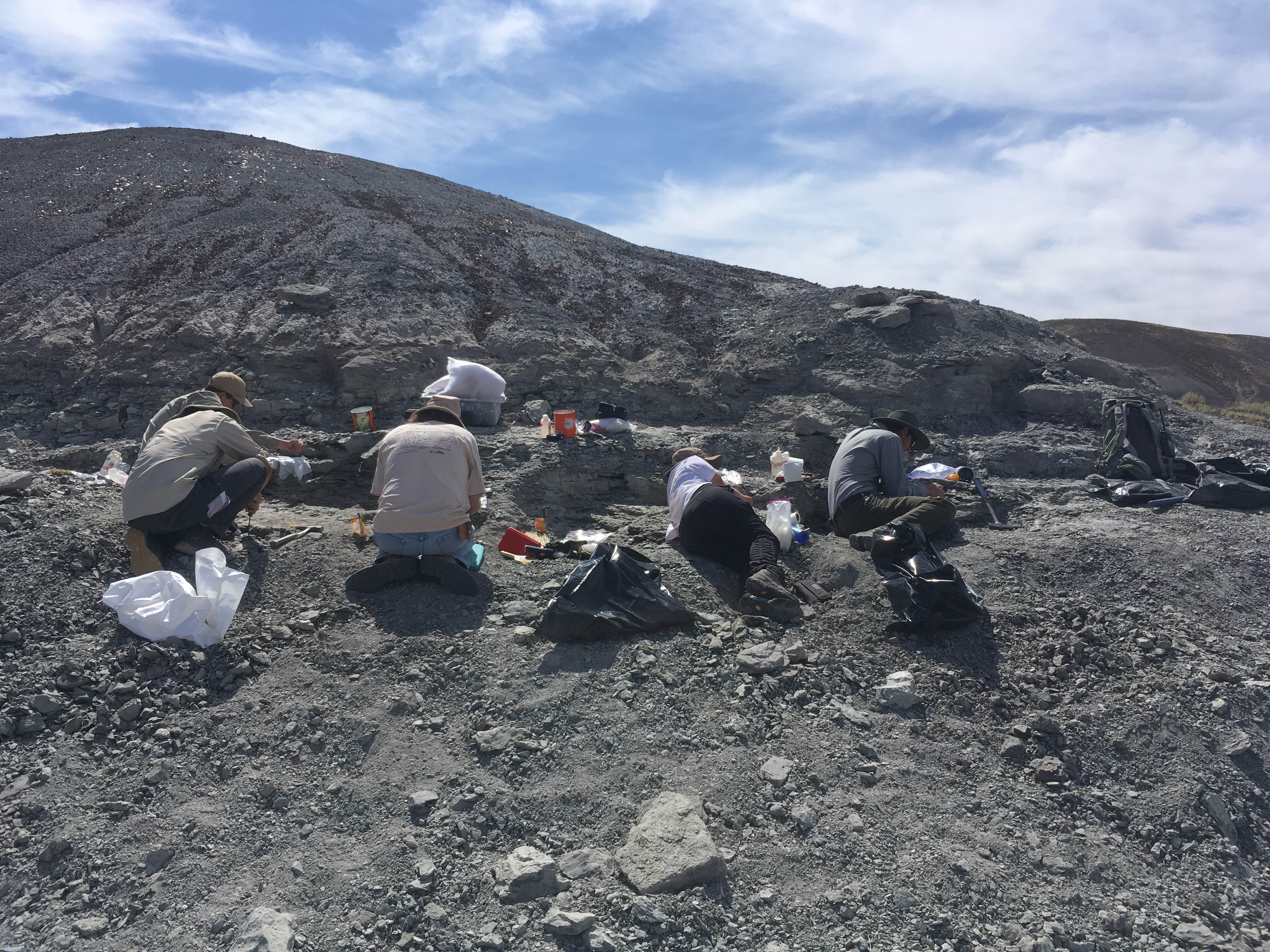 Petrified Forest paleontologists told Jenkins the newly discovered creature was obviously burrowing, because of the shape of the claw and other fossils identified at the site. But Jenkins wanted to better understand how and why the Skybalonyx skapter would have been a burrowing species, because other members of the drepanosaurid family have been classified as tree-climbing.

Having worked previously in the lab with School of Human Evolution and Social Change President’s Professor Kaye Reed, Jenkins approached her with an idea to gather comparative data. Reed helped secure undergraduate research funding to send Jenkins to Washington, D.C., to conduct the research.

Jenkins visited bone collections at the Museum of Comparative Zoology at Harvard University and the Smithsonian to measure the claws of almost 200 species, including squirrels, chameleons and sloths. He measured the width, length and height of claws from reptiles and mammals, and creatures that climbed trees, dug burrows and lived underground.

The findings indicated that Skybalonyx skapter’s special claw most closely resembled the claws of burrowing animals like echidnas, moles and tortoises.

“Xavier developed this research on his own — he outlined the project and we discussed methodologies,” Reed said. “It was so exciting when he ran the multivariate analysis and categorized groups of animals based on how they used their manual digits. Xavier was tenacious throughout the process, and an exemplary undergraduate student. He’s going to be an excellent paleontologist.” 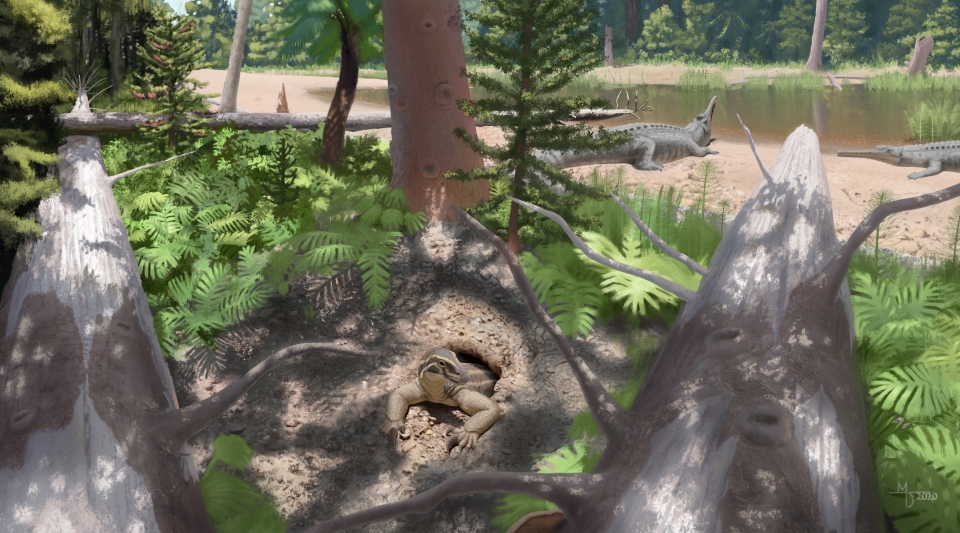 A young start in paleontology

“I was raised on dinosaur books,” Jenkins said. “My parents fed me Richard Dawkins' biology books since I was a kid, because that's what I expressed interest in, and I've been following that path ever since then.”

Through high school and undergraduate studies at ASU, Jenkins was ambitious, seeking out opportunities to learn more about studying dinosaurs as a career. He participated in fieldwork during high school, attended a vertebrate paleontology conference, helped faculty with lab research during college and was a member of ASU’s Undergraduate Anthropology Association.

“I didn't know what I wanted to do in paleontology, but I knew I wanted to be out there, digging,” Jenkins said.

Jenkins took advantage of unique opportunities available at ASU. “I'm a strong proponent of undergraduate research,” Jenkins said. “This research wouldn’t have been possible if not for working in Kaye Reed’s lab. I also worked in Curtis Marean's lab for a year and that was great.”

Working in these labs was not a part of a posted internship. Instead, Jenkins simply asked if they needed help. He had already secured their permission to take graduate-level courses as an undergraduate student.

To students worried about reaching out to a professor, Jenkins recommends just asking. “Professors are people too,” he said. “And they're often doing such prolific work — especially at (the School of Human Evolution and Social Change). They can be on dozens of research projects and could use your help for something.”

Jenkins is now working toward a PhD in biological sciences at another prestigious university. After earning a doctorate, he would like to go straight into a postdoc program, and someday have his own research lab as a tenured professor.

He wants to continue to examine the role of specific dinosaurs as individuals within an ecosystem. This study can be described as paleoecology. “I think it's great to find new species and describe them,” Jenkins said. "But if you're not understanding what they were actually doing, because they were living and breathing animals, what's the point?”

It’s summer. You’re walking down a familiar street in Phoenix and notice that a dirt lot that had previously been empty is now filled with trees with huge canopies, sprawling grass, and dense brush. Not only is the green vegetation pleasing to the eye, it’s doing two other key things: cooling the city and reducing air pollution. New joint research between Arizona State University and the ci...

It’s summer. You’re walking down a familiar street in Phoenix and notice that a dirt lot that had previously been empty is now filled with trees with huge canopies, sprawling grass, and dense brush. Not only is the green vegetation pleasing to the eye, it’s doing two other key things: cooling the city and reducing air pollution.

New joint research between Arizona State University and the city of Phoenix is taking an in-depth look at the best ways to incorporate more trees, shrubs and grass around the city to curb urban heat and pollution — all while conserving water. 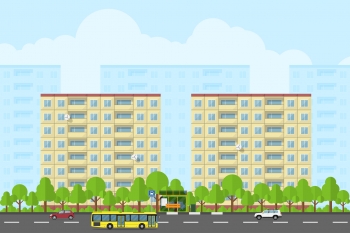 The study is the most comprehensive to date in Phoenix that is aimed at quantifying vegetation growth, its water use, and the impact on land surface temperature.

Led by Soe Myint, professor in the School of Geographical Sciences and Urban Planning, the study is designed to provide Phoenix decision-makers with the critical information necessary to forge new public policy and implement tree beautification and cooling programs around the city where they are needed most.

“This research will allow Phoenix’s city managers to identify areas of concern and make informed decisions for effective water conservation practices to lower heat stress and improve the health and wellness of the Phoenix community,” said Myint, an expert on urban climate in desert cities and principal investigator of the study. “This is real-world research conducted in close partnership with key stakeholders that can impact our local community.”

From research to reality

It’s been long understood that plants and urban vegetation contribute to lowering land surface temperatures, however, increasing green spaces in a desert city can lead to higher outdoor water use, which is not ideally practical for urban sustainability.

The absence of localized data quantifying this phenomenon has limited our understanding of exactly how much water is necessary to cool Phoenix and whether vegetation cooling strategies are realistically and efficiently achievable.

Using the data and advanced mapping analysis, Myint and his team are able to tackle key research questions that have previously remained unanswered.

Among a number of things, the study seeks to identify with specificity the number of degrees Celsius various types of vegetation — trees, grass and shrubs — lower the land surface temperature at different points in the day, in the summer, and in the winter. The team will also determine how much water each plant will use based on its land-use category; and how much it would cost the city of Phoenix to maintain.

“If we convert open land and open soil in the city of Phoenix to 10% of grass features, 10% of trees or 10% of shrubs, how many degrees Celsius can that lower within the city of Phoenix?” Myint said. “This research will identify all opportunity areas of hot spots, cold spots, stressed areas, and how much water is required to grow vegetation in certain land-use areas.”

“Decision-makers will know that if they increase this much vegetation, it will need this much water and they will need to spend this much to maintain it annually.”

ASU and the city of Phoenix together will do in-depth scenario planning.

“There are a lot of open spaces in the city that are just left open; what if we can use that open land and convert it into trees it can help our city fare better than other cities,” Myint said.

The benefits of more urban vegetation extend beyond reducing heat stress: Plants mitigate air pollution that is linked to respiratory and cardiovascular morbidity and mortality rates within the city.

“We are in one of the most (air) polluted cities in the United States, like LA, but in addition, we live in one of the warmest areas,” Myint said. “We need a lot more incentives to self-increase vegetated features, not only to lower surface temperatures but to absorb the carbon dioxide and release oxygen to help us not only cool the environment but help the health conditions of all people within the city.”

Myint is the recipient of the highly-competitive, NASA ECOSTRESS program grant. Of more than 120 submissions from universities across the country, only 15 projects were funded and the ASU-led project is the sole research working on city heat islands and water use.

“It was perfect timing that NASA produced brand new satellite data, it has water use, it has land surface temperature, it has evaporative stress and it has water use efficiency,” Myint said. “I knew we could use all these available data and make something really meaningful for evidence-based decision making and policy formulation.”

Myint, who has studied urban heat island warming and cooling in desert cities around the globe for almost two decades, says that being able to conduct real-world research in close partnership with key stakeholders to benefit the people of Phoenix is rewarding.

“It’s an honor for me to work with the city of Phoenix, to collaborate together to inform actual decision-making based on the results,” Myint said. “With this knowledge, Phoenix city planners can make decisions properly for urban greening development of a sustainable future.”

“The city of Phoenix can be a model city, among others.” 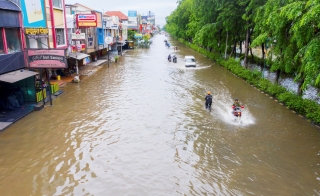 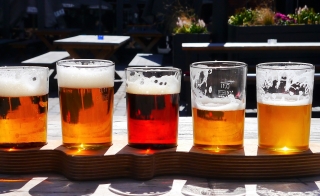 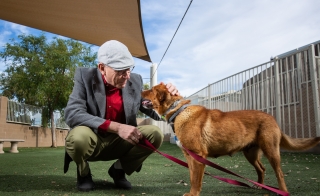 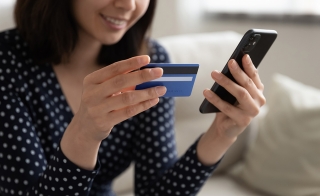 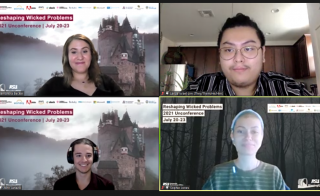