It’s all about the process: ASU historians discuss elections throughout American history

Each election, whether it is a race for the presidency, a senate seat or a seat on a city council, captures the unique snapshot of a region or group of people in history.

Many people are referring to this year’s presidential election as the most important election in our lifetime, and no matter what the outcome might be, it will be remembered for the distinctive circumstances it is taking place under. 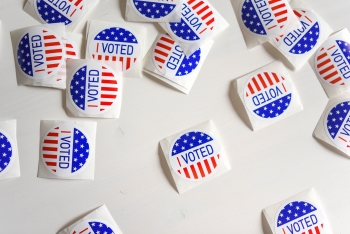 Many elections in the history of the U.S. have been seen as important and all of them for different reasons. Before you head into Election Day, learn about a few elections that may be just as novel as the current one.

Historians in Arizona State University's School of Historical, Philosophical and Religious Studies spoke about other important elections in the U.S. and the context in which they took place.

The main candidates in 1800 were John Adams, who was running for reelection after serving as the second president since 1796, and Thomas Jefferson.

“Thomas Jefferson favored a limited national government and was eager for the new nation to remain distinct from European societies,” O’Connell said. “Although a slaveholder, he imagined that the U.S. would do best as a republic of yeoman farmers and he understood himself to be a defender of the common man.

“Adams believed that all human societies inevitably contained hierarchies, and government should be strong enough to direct elites' interests toward the common good. He thought that the U.S. needed to develop manufacturing and banking in order to survive in a dangerous world. He also favored policies that restricted speech and immigration, policies that Jefferson found destructive to the republic.”

The election led to heated rhetoric to the point where the American people wondered if the republic could survive. Many Americans didn’t think there should be political parties, so each party saw the other as an unwelcome challenge to democracy and a betrayal to the ideals of the American Revolution.

“Then came the vote,” O’Donnell said. “At the time, all action occurred within the Electoral College, that is, there was not a popular vote. Supporters of Jefferson and Burr had a slight numerical advantage. They meant to withhold one vote for Burr, so that Jefferson would be president and Burr vice president. Instead, each of them cast one ballot for each, and both men received 73 electoral votes.”

The vote was moved to the House of Representatives because of the tie and the House was mostly in favor of Adams. They saw an opportunity to stop Jefferson by supporting Burr as a way to advance their political interests.

“There were 36 rounds of balloting that extended deep into February of 1801,” O’Donnell said. “Finally, in part because some of those who mistrusted Jefferson mistrusted Burr even more, Jefferson emerged victorious.”

The election proved to the American people it could survive a difficult, partisan struggle and a contested election.

"Adams accepted his loss without complaint, setting a crucial precedent for peaceful transfer of power,” O’Connell said. “In his inaugural address, Jefferson welcomed both supporters and opponents, saying, ‘We are all Federalists, we are all Republicans.’”

Of course, no one wanted to go through a similar election in the future. This led to the ratification of the 12th Amendment, which establishes the current system of choosing a president and vice president together.

In 1854, the painter George Caleb Bingham painted a scene of a county election day in Missouri. The painting gives some clues to the political culture at the time.

There are no voting booths and no barriers between voters and the candidates running for office.

“Citizens of Missouri and several other states voted viva voce or live voice,” said Calvin J. Schermerhorn, professor of history. “You got up in front of the recorder and spoke your vote. The men tipping black top hats are handing out tickets — vote for me and my party.”

Yet the painting depicts important omissions from the democratic ritual. No women and no African Americans are voting.

“The most prominent Black man is pouring cider on behalf of a candidate to a voter who apparently needs a lot of it to decide,” Schermerhorn said. “In 1854 only five states permitted Black votes, and they were all in New England. Women didn’t get the vote nationwide until 1920, though states like Wyoming permitted it in 1869 and New York in 1880.”

Beyond the poll, there appear to be voters consuming alcohol and others having discussions.

“Violence on the Kansas-Missouri border flared in 1854,” Schermerhorn said. “Most of the issues involved local matters of taxes and restrictions, but the government was small and there was no income tax.”

The country was in the midst of major political realignment. A new Republican Party was forming in states like Wisconsin, Illinois and Michigan since the old two-party system had collapsed. In just seven years, the country would be thrown into the Civil War as politics couldn’t contain the growing divide regarding slavery in the country.

After the assasination of president John F. Kennedy in November 1963, Lyndon B. Johnson assumed the presidency and worked to fulfill Kennedy’s commitment to the civil rights struggle. He passed the Civil Rights Act in July 1964 and launched the War on Poverty, a series of social programs designed to ameliorate the worst economic forms of discrimination during his short stretch as president.

Johnson decided to run for election in 1964 as a Democrat from Texas against Republican candidate Barry Goldwater, a U.S. senator from Arizona.

“Goldwater, a staunch fiscal conservative who was a fierce believer in rugged individualism and American patriotism, disapproved of how Johnson handled several political crises during the president’s short tenure in office,” said Katherine Bynum, assistant professor of history. “The chill of the Cold War and the first long, hot summer intersected at a crucial moment during the presidential election of 1964.”

By attacking Johnson’s administration for their policies of Cold War liberalism, Goldwater held a political advantage. He regularly criticized the president for being too accommodating with the Soviet Union, for excessive government funding of the War on Poverty and blamed him for the urban rebellions that erupted that summer in Chicago, and Harlem and Rochester in New York.

“Like many other Americans, Goldwater disapproved of the civil rights movements and he often made erroneous links between the growth of civil rights protests in the 1960s and War on Poverty spending to the rising crime rates across the U.S.,” Bynum said.

As a response to Goldwater’s attacks, the Johnson administration launched “one of the most controversial and successful television advertisements in our nation’s history.” They portrayed Goldwater as a "hot head" who would likely lead the country into a nuclear war with the Soviet Union.

The advertisement was a success, but Johnson worried about Goldwater’s accusations about his excessive government spending, the rising crime rates and the spread of communism would hurt him and he ended up adjusting both his foreign and domestic policies.

“Not only did Johnson accelerate the nation’s involvement in Vietnam by falsely claiming that North Vietnamese forces attacked American ships in the Gulf of Tonkin in August 1964, but he also undercut many of the Great Society’s programs by unleashing the War on Crime,” Bynum said.

Johnson, like Goldwater, was disturbed by the rising urban rebellions happening during the summer of the election year, which arose from cases of police brutality.

“Though Black residents who participated in the uprisings did so in response to racist policing and economic and racial exclusion, Johnson labeled them as criminals, arguing that the civil rights legislation and the War on Poverty provided Black Americans with tangible solutions,” Bynum said. “Instead of confronting discriminatory policing, Johnson introduced increased federal spending in local police agencies on an unprecedented level by passing a series anti-crime laws that not only derailed the War on Poverty but also contributed to the rise of mass incarceration.”

When the election took place in November of that year, Johnson won in a landslide, but his victory was significant for other reasons. He accommodated Republican talking points by asserting he was tough on crime and communism.

“In doing so, he significantly undermined his commitment to Cold War racial liberalism by trying to disprove Goldwater’s claims,” said Bynum. “The acceleration of the war in Vietnam and the ill effects of his anti-crime legislation became the central focus of the presidential election of 1968 that ultimately led to the rise of the New Right.”

Participate in the historic democratic process and vote. You can vote early on any ASU campus, or you can vote by mail or in-person.

Jerry Coleman, the serial entrepreneur with more than 20 years of experience in real estate and a passion for developing and growing companies on a national scale, has been named the winner of the 2020 Spirit of Enterprise Award. Coleman, co-founder Offerpad, will accept the award on Tuesday, Nov. 3, during a virtual event hosted on Zoom. Spirit of Enterprise is part of the Economic Club of Phoe...

Jerry Coleman, the serial entrepreneur with more than 20 years of experience in real estate and a passion for developing and growing companies on a national scale, has been named the winner of the 2020 Spirit of Enterprise Award.

Coleman, co-founder Offerpad, will accept the award on Tuesday, Nov. 3, during a virtual event hosted on Zoom. Spirit of Enterprise is part of the Economic Club of Phoenix event series, presented by Arizona State University’s W. P. Carey School of Business. Now in its 24th year, Spirit of Enterprise honors Arizona’s best companies and entrepreneurs for creating jobs, boosting the economy and delivering outstanding customer service. While the company founder doesn’t need to be an ASU alumnus or have any affiliation with the university to be considered for the award, Coleman received his accountancy degree from the W. P. Carey School of Business in 1997.

Coleman co-founded Invitation Homes (one of the pioneers in the institutional single-family rental industry) and Alliance Investment Group (which has acquired and developed over 10,000 acres of land in the Southwest) and co-founded Elevation Home Energy Solutions (a leading provider of residential energy solutions across the U.S.) in 2014. In 2015, he co-founded Chandler, Arizona-based Offerpad, a premium real estate tech innovator that revolutionizes how people sell and buy homes while eliminating the stress and uncertainty of traditional real estate transactions. Through each of these ventures, he strives to provide more opportunities and jobs for the local economy.

“There’s never been a greater need for innovation in real estate and the energy sector. Job creation is also extremely important in the current environment,” Coleman said. “We are deeply focused on both of those things as we build great companies and support entrepreneurs and innovators. These areas will continue to drive progress in our communities and beyond.”

A key event in the annual Economic Club of Phoenix calendar, the Spirit of Enterprise Award will be held Tuesday, Nov. 3, from noon to 1 p.m. Arizona time (2 to 3 p.m. EST), live on Zoom. Tickets are available to nonmembers for $50.

Journalists can RSVP to attend the virtual event from noon to 1 p.m. on Nov. 3. One-on-one interviews with Coleman are possible before and following the event. Email press@offerpad.com for more information.