The Sandra Day O’Connor College of Law at Arizona State University is joining the American Bar Association and dozens of law schools across the country in the formation of a Legal Education Police Practices Consortium to contribute to the national effort to examine and address legal issues in policing and public safety, including conduct, oversight and the evolving nature of police work. “The ABA has the ability to bring together diverse groups to address these problems and the duty to act to help bring racial equality to our criminal justice system,” said ABA President Patricia Lee Refo. “The consortium will engage law students and legal experts from around the country in studying and forming solutions to help improve policing practices in our communities.”

ASU Law Dean Douglas Sylvester said, “The Sandra Day O’Connor College of Law is delighted to participate in this important endeavor. Not only does it advance important societal goals, consistent with ASU’s charter and design imperatives, but it also creates great opportunities for our students.”

Drawing on the geographic diversity of the ABA, the participating law schools and their networks, the consortium will advance the widespread adoption of model police practices and initiate other projects designed to support effective policing, promote racial equity in the criminal justice system and eliminate tactics that are racially motivated or have a disparate impact based on race.

The consortium will be organized and housed within the ABA Criminal Justice Section and will have input from and access to the full range of the ABA's expertise and programs. Each participating law school will develop opportunities for one or more of its law students to engage in consortium activities. Law student participant assignments may include:

A new mobile app from Arizona State University aims to bring comprehensive civic education resources to the hands of thousands of students and teachers across the state and country. CivEd launched on the Apple App Store and Google Play store this week. Developed by the School of Civic and Economic Thought and Leadership, CivEd offers a number of resources for students, teachers and citizens inter...

A new mobile app from Arizona State University aims to bring comprehensive civic education resources to the hands of thousands of students and teachers across the state and country.

CivEd launched on the Apple App Store and Google Play store this week. Developed by the School of Civic and Economic Thought and Leadership, CivEd offers a number of resources for students, teachers and citizens interested in learning more about the democratic process and U.S. history. The app’s initial features include the Civic Literacy Curriculum and the Civic Classics Collection Virtual Guide. 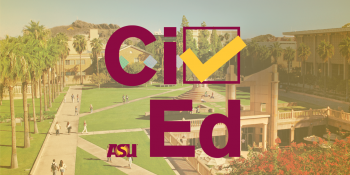 The Civic Literacy Curriculum is a seven-section civics curriculum based on the naturalization test from the United States Citizenship and Immigration Services, which is given to everyone going through the U.S. naturalized citizen process. Each section focuses on a specific subject matter, ranging from rights and responsibilities as citizens to colonial period and independence history. They include study guides, a plethora of free videos and flash cards. The app also includes the full, 100-question test used by the USCIS.

The Civic Classics Collection Virtual Guide is a new way to view and study famous American works of political thought and original writings from iconic moments in U.S. history. Housed at ASU Library, the Civic Classics Collection contains more than 20 works ranging from a first edition copy of the Federalist Papers to a signed copy of Martin Luther King Jr.'s "Stride Toward Freedom." The virtual guide brings these great works to the fingertips of thousands of students, who can now watch in-depth videos, read about the works and participate in offline learning activities.

“The next generation of Americans need to be informed voters, yes — but they also need to be active and informed participants in politics beyond and between elections,” said Adam Seagrave, associate director for the School of Civic and Economic Thought and Leadership. “CivEd provides the accessible resources necessary for all Americans across the country to grow in the civic knowledge necessary to fulfill their high calling as participants in American constitutional democracy.”

Designed to fix a larger problem

CivEd and the efforts behind it stem from the school and its centers’ efforts to bring civic education back to the top of the priority list for American education systems. According to Marketplace, the U.S. now spends roughly only $4 million on civics education across the country, or what equates to roughly $54 per student annually. That’s compared to almost $3 billion for STEM spending.

“This persistent civics gap undermines all citizens, but disproportionally affects civics engagement and empowerment for underrepresented communities, impacting everything from voter turnout to trust in our institutions,” said Lucian Spataro, interim director of the Center for Political Thought and Leadership. “With this in mind, it should come as no surprise, when people do not understand the system by which they are governed, including how to effect change in that system, they are naturally frustrated and this often leads to protests, disengagement from the political process, and in some cases even violence. So from a student's perspective, we want them leaning forward and learning so they graduate as informed, engaged, and responsible citizens.”

Spataro previously led the Joe Foss Institute, a Scottsdale-based nonprofit that joined the Center for Political Thought and Leadership in November 2019. The Joe Foss Institute led efforts in more than 30 states — including Arizona — to require a civic education exam for students before they graduate high school. The CivEd app acts as a study preparation and tool for teachers to measure their students before they take the actual test.

“Teachers and students in states who passed (civic education legislation) are driven to our site in an effort to fulfill that requirement,” Spataro added. “In other cases, teachers will use this assessment and this course content as baseline knowledge that is a ‘must’ that students need and they then teach up and in more depth from here.”

The app’s initial features include the Civic Literacy Curriculum and the Civic Classics Collection Virtual Guide.

Screenshot of the Civic Literacy Program from the app.

The school will continue to add features to CivEd in the coming months, including several of its civic education initiatives and outreach programs. It’s currently working on adding an essential version of the Arizona state constitution to the mobile app, as part of the school’s Arizona Constitution Project. The Arizona Constitution Project aims to make the state’s founding document and the story of its creation more accessible to the state’s citizens. It will also incorporate the Race and American Story course taught by Seagrave, which helps college students confront difficult conversations around race in America.

The school is also planning to add access to its public programs through the mobile app. As ASU has continued to prioritize virtual events in the time of the pandemic, the school has produced two speaker series since March, including one that focused on conversations around the pandemic and another to address recent racial events across America.