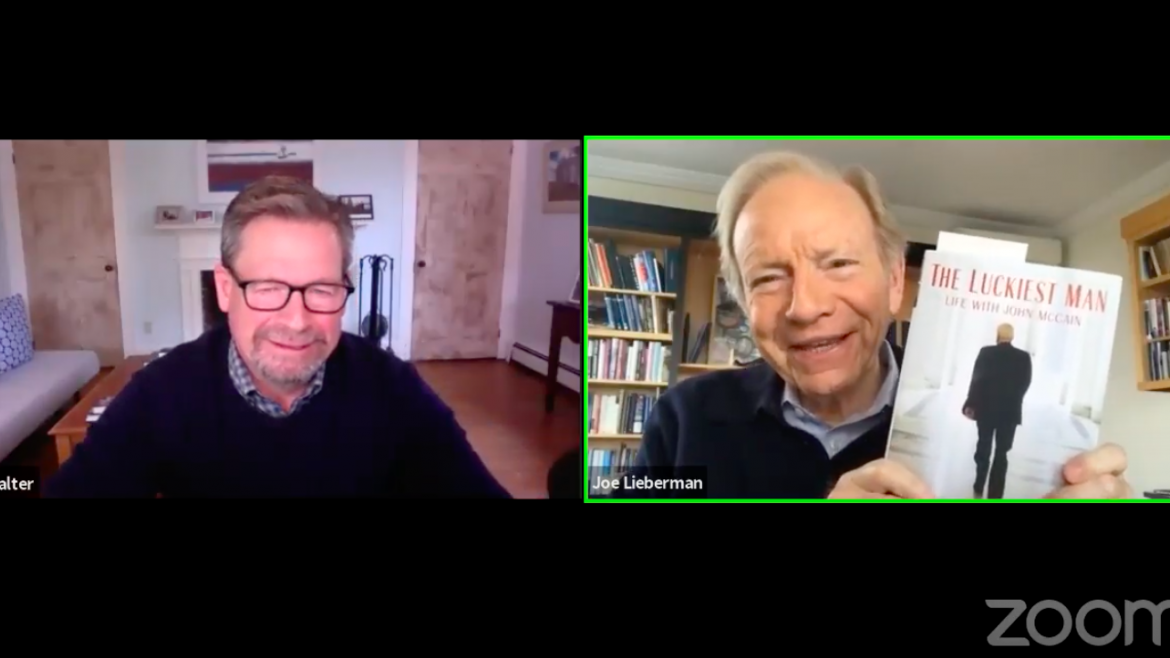 The author discussed the book with former Connecticut Sen. Joe Lieberman at a McCain Institute Authors & Insights event on Oct. 20

It was 1988, and Salter was working as a press aide for U.N. Ambassador Jeane Kirkpatrick. Salter had drafted Kirkpatrick’s speech for the 1988 Republican National Convention and traveled with her to the event at the Superdome in New Orleans. The speech was a hit — the convention floor was dotted with delegates holding signs that read “Lean on 'em, Jeane” — and she had agreed to do media interviews after the speech was over.

“The Superdome is a cavernous place,” Salter told former Connecticut Sen. Joe Lieberman during an Oct. 20 event organized by Arizona State University’s McCain Institute to discuss his new book, “The Luckiest Man: Life with John McCain.” “And I couldn’t find her. I got on a walkie-talkie and asked to be taken to where Ambassador Kirkpatrick was doing this interview, and a convention volunteer came to rescue me and take me to where Ambassador Kirkpatrick was.”

That convention volunteer happened to be Sen. McCain’s press secretary, Torie Clark, who invited Salter to watch President George H. W. Bush’s acceptance speech the next night from the prime real estate of the Arizona delegation. Clark also introduced Salter to many McCain staffers, including his then-scheduler, Diane McClellan, and Sen. McCain himself.

“He asked me to do a few speeches for him, on Torie’s recommendation, and eventually offered me a job, which I took,” Salter said. “And that began a 30-year association with him. And I married Diane, his scheduler. So when people ask me, ‘What was your career plan?', I tell them, ‘I planned to get lost in the Superdome and let the rest of my life happen.’”

During a warm, candid and wide-ranging conversation, Lieberman and Salter discussed the qualities that made McCain a national leader for so many years and, in Lieberman’s words, “a character-driven leader, and also a character.”

“He was very influenced by his father, by the naval tradition in his family that stretched all the way back to the Revolution,” Salter said. “He had a line he repeated all the time, and that was that his father’s and his grandfather’s respect for him was the most lasting ambition of his life.”

It was McCain’s sense of duty and his admiration of his father that led him to decline early release from imprisonment during the Vietnam War.

“He refused amnesty for two reasons,” Salter said. “One, he knew his release and his father’s position as an admiral would be used for propaganda purposes. But he also thought his father would be disappointed in him. Even after they beat him for three days and forced him to record a propaganda statement, the thing that worried him the most was that he knew his father would hear it.”

McCain’s later efforts to reconcile with Vietnam made him something of a hero to the Vietnamese.

“The first time I went to Vietnam with him, as the plane was landing, he turned to me and said, ‘I have to explain something’,” Lieberman remembered. “'If people recognize me, it’s going to be a reaction that you’re probably not expecting.’ And sure enough, we’re on the street, about to go into the museum in the Hanoi Hilton, and there’s a group of young college students who see him. And they gathered around us, chanting, ‘Mc-CAIN! Mc-CAIN! Mc-CAIN!,’ and wanted autographs!”

Lieberman recalled that McCain was deeply devoted to human rights.

“When we would travel around the world, if we went to a country that was not a democracy, he would insist on seeing the opposition, usually at some peril,” said Lieberman.

“He had this duality about him, he was both a romantic and a cynic,” Salter said. “He was a cynic about the world but a romantic about his causes. And he never gave up hope, and people knew that he would help them if he could. My daughter was a Peace Corps volunteer recently, and she was teaching at a school in a remote province in Cambodia. And one of her Cambodian colleagues was talking to her one day about all of the problems that Cambodians have with their government. And this guy had no idea that she had any connection to John. And he said, ‘But we have friends in America. John McCain is our friend.’”

Lieberman and Salter also discussed some of the less-famous facets of McCain’s personality, such as his fondness for Borscht Belt comedians.

“We had to put up with the same jokes over and over again,” Lieberman said. “We were on a plane somewhere, and I said to him, ‘That reminds me of an old Henny Youngman line, you’ve probably never heard of Henny Youngman,’ and he gives me 10 rapid-fire Henny Youngman one-liners.”

“Oh, yeah, he was a Catskills comedian, any of his town halls, you got 10 minutes straight from the Catskills,” Salter replied. “And he stole all of it. Not an original joke in the bunch.”

Lieberman believes the book is equally enlightening about the public McCain — the statesman and patriot — as it is about McCain the man.

“As much time as I spent with John, and as dear a friend as he was, and as much as I knew about him, I learned a lot I did not know about him,” Lieberman said. “It is a very special book, and a great tribute to him.”

Their virtual discussion was part of the McCain Institute’s Authors and Insights book talk series, which invites authors to discuss their newly released books on American politics, policy, or leadership.

He started it all, and he keeps on getting it done. Congratulations to the first Sun Devil NCAA men's golf champion (1983) Jim Carter on winning the 24th Lone Star NGL Texas Senior Open. ... He started it all, and he keeps on getting it done. Congratulations to the first Sun Devil NCAA men's golf champion (1983) Jim Carter on winning the 24th Lone Star NGL Texas Senior Open.