You might as well be walkin' on the moon

Living on the moon has been depicted in popular culture for decades: Typically, astronauts scamper around odd-looking buildings or zip around in dune buggies.

Now that the time to actually send people to live on the moon is nigh, what will that take? How will we pull it off? What will we ship up there? And what can we use once we get there?

Many of those questions were discussed last week during an expert panel discussion sponsored by Arizona State University’s Interplanetary Initiative.

The event was part of the Moon Dialogs, a series of policy development workshops for subject matter experts in both space and terrestrial policy.

First, costs need to come down, said Brent Sherwood, vice president at private space company Blue Origin. The company’s mission is to have millions of people living and working in space.

There is a budget sustainability aspect. For example, the International Space Station is very expensive. But space will become less expensive once private capital becomes involved.

“That’s how you make it truly sustainable,” Sherwood said.

Alexander MacDonald, chief economist of NASA’s Office of the Administrator, said government can spur a space-based economy by demanding at least two robotic missions a year, and then opening it up to private companies.

Being sustainable on the moon will mean launch frequency, said Dava Newman, the Apollo Professor of Aeronautics and Astronautics at MIT and former deputy administrator of NASA. A half dozen launches a year is not going to cut it, she said.

Sherwood agreed. Getting more people into space more often is key. And it’s important not to neglect development of low Earth orbit for human space flight, he said.

Any moon voyage needs to leave the foundation for permanent settlement. What is the minimum we need? It should be 30 days, he said. NASA already has a plan for sustained lunar exploration and development, but settlement – living on the moon permanently – is a long way off right now.

Must-haves include a lunar vehicle, a pressurized rover for overnight trips away from the lander, and a surface habitat, he said.

“As an economist, I’m worried we need to be able to afford at least those three things,” MacDonald said.

Newman added suits to the list. Current suits don’t work like you see in movies like "The Martian," where astronauts pop out of it like they’re shucking off a pair of jeans. (According to NASA, it takes 45 minutes to put on a current space suit.)

Precursor missions should use a whole suite of exploration resources — both robotic and human, Newman said.

“We can’t be afraid to fail,” she said. “A lot of systems are not going to work.”

All of our electronics and systems need to be shielded from radiation — and we don’t know enough about the radiation there, Newman said.

“We’re going to a place where we’re going to have to learn to live off the land,” Sherwood said — a first in space exploration.

You can’t build anything without understanding the materials available there, and you can’t do that down here, Sherwood added. How much radiation shielding will the regolith — the dust and broken rock on the lunar surface — provide? A meter? Two meters?

“We have to get through that phase before we talk about scaling up,” he said. “That’s a critical step.”

Once resources are found for the private sector to exploit, that will really open up development and settlement. We don’t know what materials from the moon that the terrestrial economy needs, Sherwood pointed out.

Finally, international sharing of data and information will be crucial.

“We don’t want to go to a hostile environment as multiple nations without the ability to plug into each others’ stuff,” he said.

Even with these challenges, possibilities for lunar colonies are endless.

“I want to send students to the moon,” Newman said. “Semester on the moon — seriously.”

Arizona State University students now have more opportunities to pursue a master’s degree in less time and with less financial commitment.The School of Geographical Sciences and Urban Planning has launched two new accelerated (4+1) degree programs, offering students the unique opportunity to advance their careers quickly and receive both their undergraduate and master’s degrees in as little as...

The School of Geographical Sciences and Urban Planning has launched two new accelerated (4+1) degree programs, offering students the unique opportunity to advance their careers quickly and receive both their undergraduate and master’s degrees in as little as five years. 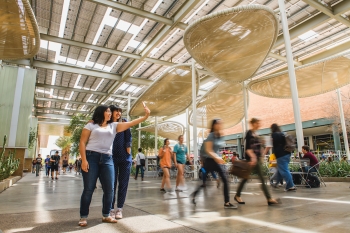 The new pathways enable qualified geography, geography (meteorology-climatology), and geographic information science (GIS) undergraduates to be simultaneously enrolled in the Master of Urban and Environmental Planning degree program in their senior year with undergraduate and graduate coursework combined for dual credit.

“These accelerated degrees help students both professionally and financially,” said Elizabeth Wentz, interim director in the School of Geographical Sciences and Urban Planning and vice provost and dean of the Graduate College. “Professionally, students can complete both a bachelor’s degree and a master’s degree in five years rather than a more traditional path which requires six years. This means, too, from a financial perspective, students then only pay five years of tuition reducing the financial burden of earning two degrees.”

Geography and GIS students can save more than $10,000 in tuition and fees versus the cost of the traditional Master of Urban and Environmental Planning degree program, and they receive accelerated interdisciplinary training.

“These new degree offerings create expedited opportunities for students to efficiently gain interdisciplinary training across geography and planning, which many of them seek given the allied nature of these fields,” said Kelli Larson, deputy director and professor in the School of Geographical Sciences and Urban Planning.

Bridging together place and location

Integrating the tools of geography and urban planning are critical to addressing environmental and social challenges faced by human societies and places today.

“As a school, we see a strong alignment between planning and geography because of the common expertise around ‘places’ and ‘location,’” Wentz said. “This tie for students means that there is a bridge between theories and methods in both disciplines to practice found both in GIS and in planning practice.” Teresa Garcia, an ASU alumna with a double major in geography (meteorology-climatology concentration) and urban planning, and with a certificate in GIS, credits her extended studies and complementary degree programs with equipping her with a greater level of understanding of resilience planning, green infrastructure and the spatial relationships and environmental factors that influence them.

“As someone who studied meteorology, it helps me understand and see how much heat and rising temperatures take a toll on communities and people, and then bring that (knowledge) into planning,” Garcia said. “You want to make sure you have infrastructure that can withhold the high heat or reduce cooling in an area, especially for low-income communities.”

Garcia, who is also currently enrolled in ASU’s Master in Urban and Environmental Planning program, aspires to use her undergraduate and graduate degrees to become a resilience planner and create meaningful impact on communities like the one in which she grew up.

“My experience growing up in the West Valley, I saw a lot of low-income families who were just trying to live and not suffer in the heat while waiting at a bus stop that had no shade or trees,” Garcia said. “As the years went on, I’ve seen how the neighborhood has changed and what changes could be made. I’m looking forward to taking my experience from my neighborhood and my education to help a bigger city.”

In the past five years alone, nearly 40 students have utilized the School of Geographical Sciences and Urban Planning’s accelerated 4+1 degree programs, and more than 70% of Master in Urban and Environmental Planning graduates have found employment in planning or a related field within one year following graduation.

“Using these new pathways is a really good opportunity for students to experience the interdisciplinary nature of our school,” said Rebecca Reining, manager of graduate programs for the School of Geographical Sciences and Urban Planning, who alongside others, led the creation of the new pathways. “It gives students a different perspective, a broader knowledge base and important skill sets that have the potential to expand their marketability and competitiveness in the job market.”

For students interested in participating in the accelerated 4+1 programs for the fall 2021 semester, preliminary applications are due March 15, 2021.

For more information, visit the School of Geographical Sciences and Urban Planning accelerated 4+1 degree webpage or contact your academic adviser.