The field of structural biology has made enormous strides, peering into the activities of nature at the tiniest scale. Such investigations are critical for charting the behavior of important macromolecules and understanding their essential role in living organisms.

Researchers at Arizona State University's Biodesign Center for Applied Structural Discovery and School of Molecular Sciences have taken a new approach to studying molecules of life, examining not only their static structures at high resolution but the all-important dynamic movements of such molecules as they carry out biological functions. 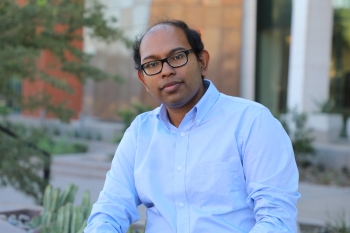 Abhishek Singharoy is a researcher in the Biodesign Center for Applied Structural Discovery and ASU's School of Molecular Sciences. Download Full Image

The new method involves an aggressive reprocessing of data obtained through a groundbreaking technique known as cryogenic electron microscopy or cryo-EM. Here, molecules targeted for study are flash-frozen in a thin membrane of ice before being subjected to electron microscopy. Tens or even hundreds of thousands of still images are collected, then reassembled by means of computer.

The technique offers a powerful alternative to X-ray crystallography for probing the molecular world in keen detail. Indeed, cryo-EM excels in the areas of study that are most challenging for X-ray crystallography, the imaging of large protein complexes resistant to conventional crystallization methods.

Although early iterations of cryo-EM struggled to compete with the extreme image resolution characteristic of X-ray crystallography, rapid advances in the field now enable cryo-EM to produce stunning macromolecular images at near-atomic-resolution.

In the new study, Abhishek Singharoy and his colleagues demonstrate that cryo-EM can be pushed to even greater extremes of clarity, by extracting precious information previously buried in the reams of cryo-EM data.

“Now, we can actually see minimum free-energy pathways image-by-image during a simulation,” Singharoy said. “It was impossible to see energetically feasible molecular movies before. Now cryo-EM, machine learning and molecular dynamics simulations have got us there.”

The findings are reported in the current issue of the journal Nature Communications.

Applying the new strategy pioneered by co-authors Ourmazd and 2017 Chemistry Nobel laureate Frank, which involves mathematical techniques of geometric machine learning combined with classical molecular dynamics simulations, helped researchers capture the fleeting movements of ryanodine receptor type 1, an important calcium channel able to bind other molecules. Subtle conformational changes of the receptor play a crucial role in the contraction of skeletal muscle and muscles of the heart, once the receptor has been triggered by a specific binding molecule.

Combining snapshots that were intermediary between the fully closed and open conformations helped capture this receptor’s structural shape-shifting before and after binding by activating molecules.

The new technique will be a boon in practical areas — particularly, drug discovery — while helping to resolve foundational issues in molecular biology.

Often considered the workhorses of the body, proteins are among the most important biomolecules critical to life processes. They provide structural foundation for cells and tissues and perform a dizzying array of tasks, from metabolizing energy and helping cells communicate with one another to defending the body from pathogens and guiding cell division and growth.Because protein dysfunction is imp...

Often considered the workhorses of the body, proteins are among the most important biomolecules critical to life processes. They provide structural foundation for cells and tissues and perform a dizzying array of tasks, from metabolizing energy and helping cells communicate with one another to defending the body from pathogens and guiding cell division and growth.

Because protein dysfunction is implicated in so many serious diseases, proteins are the primary targets for most therapeutic drugs. 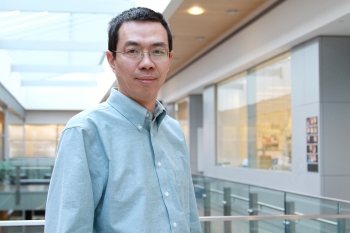 Shaopeng Wang is a researcher in the Biodesign Center for Bioelectronics and Biosensors. Download Full Image

In a new study, Arizona State Universisty Research Professor Shaopeng Wang and his colleagues describe a method for examining proteins in keen detail. To do this, his group makes clever use of a phenomenon known as surface plasmon resonance (SPR), incorporating it into an innovative type of microscope.

While SPR has been a powerful technique for investigating the world of the very small, including the interactions of bacteria and viruses, the study marks the first occasion when SPR has successfully been used to image single molecules, in this case, proteins. The new method is known as plasmon scattering microscopy.

According to Wang, “the race to develop this technology actually started 20 years ago.”

Along with lead author NJ TaoNJ Tao, directed the Biodesign Center for Bioelectronics and Biosensors, prior to his unexpected death in March of this year. He was a leading figure in the advancement of techniques for nanoscale measurements in areas including molecular electronics, optical imaging and biosensing., the group calculated that a modified form of SPR should have the sensitivity to resolve single proteins, though much preparatory work was required to make this a reality.

Wang is a researcher in the Biodesign Center for Bioelectronics and Biosensors. The new research appears in the advanced online addition of the journal Nature Methods. Pengfei Zhang, a postdoc in the center, is the lead author of the paper.

But what is a surface plasmon?

“One property of metal is that you have a lot of free electrons,” Wang said, referring to electrons not bound to atoms. “When the condition of incident light on these electrons is just right, the energy in the light causes these electrons to resonate. These oscillating electrons produce a wave across the metal surface. This is surface plasmon resonance.” 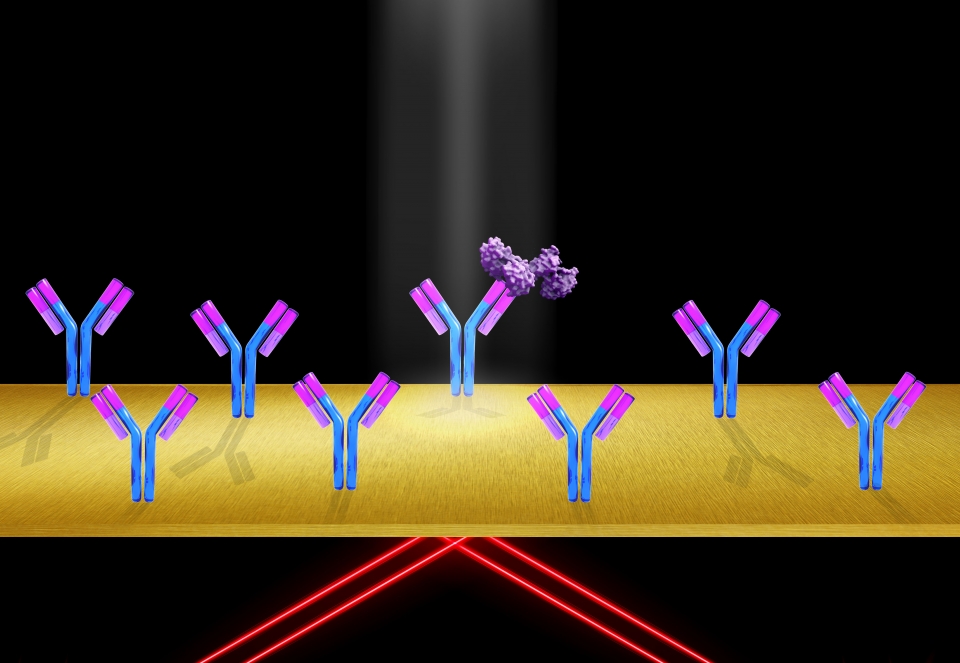 When protein molecules (purple) bind to immobilized receptor molecules, (like the Y-shaped antibodies affixed to the slide surface), the refractive index at the gold surface changes, altering the surface plasmon resonance condition, and producing an increase in signal intensity. Graphic by Shireen Dooling

In order to detect the binding of an analyte molecule (like a protein) to a receptor molecule using SPR, the receptor molecule is usually immobilized on the sensor surface and the analyte molecule is added to an aqueous solution. Polarized light is typically directed under surface of a thin gold film, where surface plasmons are generated at a particular angle of the incident light. The surface confinement of light by the surface plasmon is seen as a decrease in intensity of reflected light.

When protein molecules bind to immobilized receptor molecules, the refractive index at the gold surface changes, altering the surface plasmon resonance condition and producing an increase in signal intensity.

To refine and calibrate the system, the researchers first observed binding events using polystyrene nanoparticles, whose size can be precisely controlled. The nanoparticles also have the advantage of producing higher contrast, aiding their detection by SPR. Using smaller and smaller nanoparticles allowed the group to reach the tiny dimensions of a biological protein.

To achieve such impressive resolution, the researchers used a variant of the SPR technique, detecting light on the protein binding events from above, rather than below, which dramatically eliminates background noise, producing a crisp image. Because bound proteins scatter the SPR light in all directions, detection from the top avoids the reflected light, greatly improving image quality.

Wang likens the effect to seeing stars against the background curtain of darkness, whereas stars are invisible to the eye against the noisy background of daylight. Detection of single proteins can be realized without a very powerful light source, since SPR produces strong enhancement to the light field near the sensor surface, clarifying the protein signal.

By homing in on protein binding affinity, one of the key parameters critical for the design of safer, more effective drugs, the new SPR technique should have a bright future in the biomedical arena as well as shedding new light on foundational issues at the molecular scale.