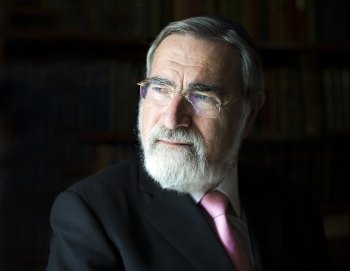 "Morality" explores moral philosophy, public discourse and the elevation of self-interest over the common good. As communities around the world have experienced in the past six months of COVID-19, bringing people together for the common good proves to be more challenging than ever.

This timely discussion revolved around the cultural and political forces that have divided Britain, America and the wider world, and Sacks’ sincere wish that people develop a "we" versus an "I" mentality.

“We are collectively responsible for the creation of a society that will benefit the common good — benefit those, who right now are least benefiting from it," Sacks said. "That was always a part of British and American society from the 17th century, maybe even earlier, until the 1950s. Somehow we became so affluent, the world around us seemed so relatively free of threats to our peace and security that we didn’t notice as this entire moral domain became fragmented.

"So that instead of thinking about what’s good for all of us, we focused on what’s good for me. I suggested that society can’t carry on like that. We do need to be held together in bonds of mutual responsibility because without it, we will indeed fragment.”

“I really enjoyed listening to Rabbi Sacks’ webinar,” said Kaitlyn Skamas, a first-year student in the College of Integrative Arts and Sciences. “I thought the talk was going to solely be about Judaism, but to my surprise, he was very inclusive and encouraged the concept of ‘creating friendships through faith.’”

“The biggest takeaway for me was just how truly thirsty our communities are for a civil discussion among people who may disagree about many important things, yet are sincerely interested in healing the rifts in Western society,” said Professor Barry Ritchie from ASU's Department of Physics and the director of CORES. “This honest and yet respectful discussion was a model for the destination we need to seek for discussions within the university and within society.”

You can watch the full conversation with Rabbi Sacks on YouTube.

The CORES project is made possible through the support of a grant from the John Templeton Foundation to the Arizona Center for Christian Studies, with a subcontract to Arizona State University.

The adoption of digital learning has accelerated at an unprecedented pace over the course of 2020, forcing teachers, students, policymakers and technologists to reconsider everything they know about education. To help shape a new era where all people have equal opportunity to participate in the future, Arizona State University and Global Silicon Valley will co-host their first-ever virtual ASU+GS...

The adoption of digital learning has accelerated at an unprecedented pace over the course of 2020, forcing teachers, students, policymakers and technologists to reconsider everything they know about education. To help shape a new era where all people have equal opportunity to participate in the future, Arizona State University and Global Silicon Valley will co-host their first-ever virtual ASU+GSV Summit — open to all with no registration fee. To date, more than 15,000 people have registered to attend.

Now in its 11th year, the annual ASU+GSV Summit will take place Sept. 29–Oct. 1, with preshow panels on Sept. 24 and additional sessions taking place on Oct. 7–8. Over that six-day span, attendees will have the chance to select from nearly 250 unique sessions including keynote speeches, fireside chats, panels, and networking opportunities.

More than 300 luminaries and top minds in academia, business, media, culture and government are slated to participate, covering topics ranging from equity in early childhood education, to YouTube for remote learning, to AR/VR applications in K–12, to big ideas around the student debt crisis. This year’s keynote speakers will include renowned scientist and television personality Bill Nye; political activist and writer Gloria Steinem; former Secretary of State Colin Powell; and Google Cloud Chairwoman Diane Greene, among others.

Additionally, ASU President Michael M. Crow will lead a fireside chat on the emergence of new public universities that are accelerating social change.

“This year’s ASU+GSV Summit offers a unique opportunity for participants to collaborate and reimagine education through the lens of equity, which is why ASU and GSV has made the event accessible to all,” Crow said. “Now more than ever — as educators, leaders and citizens — we have a duty and a strong incentive to address the challenges of modern learning. The summit is an opportunity to work collectively to devise new solutions that will effectively close the equity gap in education.”

While different from years past, the virtual conference will nonetheless provide a fun, engaging platform for attendees, who will be able to seamlessly navigate an interactive venue comprising networking opportunities, workshops, "speed dating" happy hours, lobby areas and group conversations.

For additional information regarding the 2020 ASU+GSV Summit, please visit asugsvsummit.com.

The ASU+GSV Summit will also host a series of standalone events leading up to next year’s summit in April 2021. More details will be announced soon.