Chimpanzee ‘bros’ hang out as friends, but most social ties remain a mystery

Strong social ties are a key driver of cooperation in many species and are associated with adaptive benefits in several of them, including humans, feral horses and dolphins. Although such bonds are widely observed, it is not always known why any two particular animals become friends (just as in humans).

In a recently published article, Arizona State University primatology graduate student Joel Bray and ASU primatologist Ian Gilby used long-term observational studies of chimpanzees at Gombe National Park in Tanzania to analyze what factors explain partner choice and cooperation in male chimpanzees. Gilby is a research affiliate with the ASU Institute of Human Origins and an associate professor with the School of Human Evolution and Social Change. He is also the convener of the Gombe Research Consortium, which manages six decades of detailed behavioral, ecological and demographic data from the long-term study of two chimpanzee communities at Gombe. “We extracted and analyzed almost 40 years of behavioral data. So, for many males we had complete records of their friendships from the day they entered adulthood to the day they died,” said Bray, who spent a year living at Gombe and observing chimpanzees in the wild.

Bray and Gilby found that male chimpanzees formed friendships lasting up to 13 years. Maternal brothers formed the strongest bonds, but overall, only a small number of close bonds among adult male chimpanzees were explained by kinship.

Although all male chimpanzees remain in the social group they were born in, slow reproductive rates combined with high infant mortality and a 50-50 sex ratio mean that few males have maternal brothers in their group. Whether males can recognize their paternal half-brothers is an open research question, but current evidence from other study sites suggests they cannot.

Beyond kinship, there was no clear predictor of which males formed friendships. For example, males of similar age and rank were also not more likely to associate, which suggests that bond strength results from a more complex process than a simple accounting of basic characteristics.

These results contrast with findings in other species that form strong social bonds. So, what explains partner choice in male chimpanzee friendships? Based on studies in other species and captive chimpanzees, the researchers suggest that it could be compatible personalities, which is an area for further research although no final conclusions can be made at this point.

“Understanding chimpanzee friendship gives us insight into the evolution of cooperation and friendship in humans, and how cooperation evolves in the absence of factors such as kinship,” Gilby said.

How and why did human beings evolve to cooperate with unrelated individuals or even strangers? Consider National Public Radio — donors could listen for free, yet thousands of people donate, collectively supporting a public good.To understand how this cooperative inclination developed in humans over the last millennia, scientists look to our primate cousins to see if they can observe glimmers of ...

ASU researcher looks at how humans learned to cooperate

How and why did human beings evolve to cooperate with unrelated individuals or even strangers? Consider National Public Radio — donors could listen for free, yet thousands of people donate, collectively supporting a public good.

To understand how this cooperative inclination developed in humans over the last millennia, scientists look to our primate cousins to see if they can observe glimmers of behavior that will help us understand the nature of human collective action. Chimpanzees, together with bonobos, are our closest living relatives, with whom we share at least 96 percent of our genome and a common ancestor that lived some five to seven million years ago. 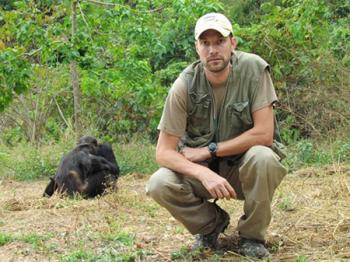 ASU researcher Ian Gilby has been studying and observing chimpanzees in the wild since 1997. Gilby is an assistant professor in the School of Human Evolution and Social Change and a research affiliate with the Institute of Human Origins. He is also the codirector of the Jane Goodall Institute Research Center database that is the repository of detailed demographic and behavioral data on two communities of chimpanzees collected for over 70 years at Gombe National Park, Tanzania. Using these records and other long-term observational data from the Kibale Chimpanzee Project studying the Kanyawara chimpanzees of Kibale National Park, Uganda, Gilby and colleagues investigated the dynamics of chimpanzee group hunts of red colobus monkeys. 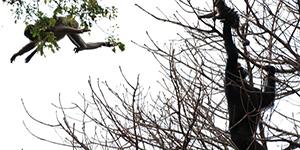 In this study, which is the first to analyze hunting data from three chimpanzee communities, the researchers found that hunting was more likely to occur if certain key individuals were present when a chimpanzee group encountered red colobus monkeys. They hypothesized that these “impact hunters” catalyzed hunting by being the first to attack, thereby creating opportunities for others to catch prey in the ensuing chaos. Indeed, as predicted, impact hunters were more likely to hunt first than expected by chance, and importantly, affected long-term hunting patterns. At both Gombe and Kanyawara, overall hunting rates decreased after the death or “retirement” of impact hunters.

These results suggest that rather than hunting in a coordinated fashion, these chimpanzees follow an “every chimpanzee for himself” strategy. Hunting in groups is promoted because an individual’s selfish attempts to catch prey incidentally benefit others.

“These results are particularly exciting,” says Gilby, “because they demonstrate the importance of systematic individual differences for understanding the evolution of cooperation. The next step in our research is to investigate the source of this variation.”