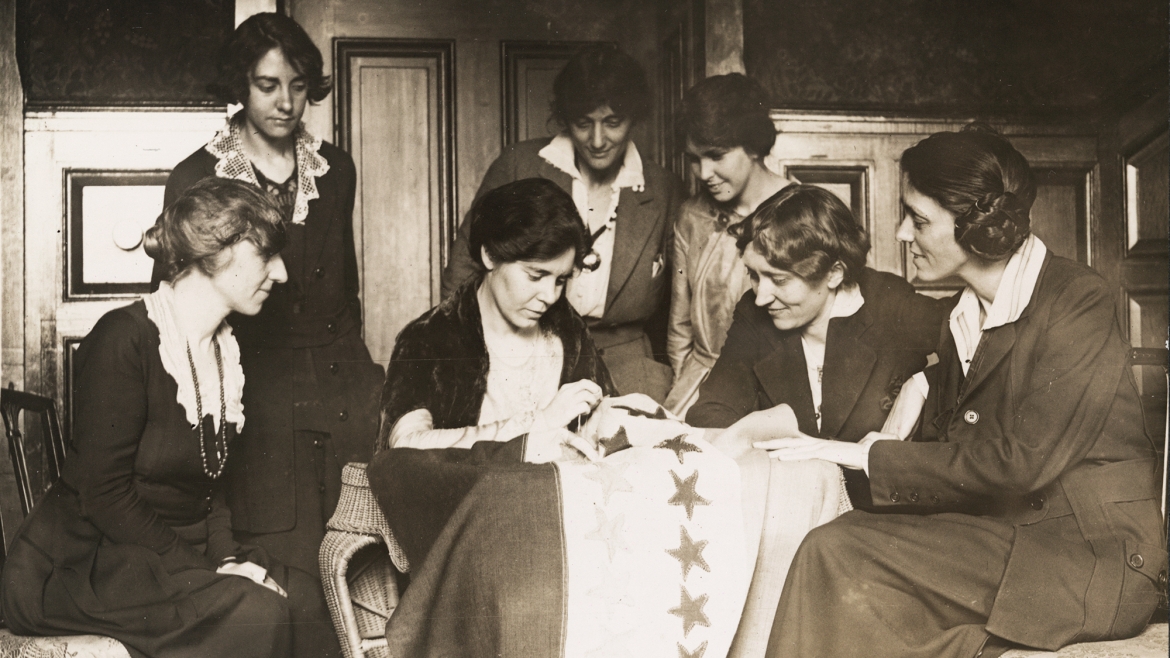 The centennial of a landmark decision that affected half the United States' population will take place Aug. 18, 2020, as the U.S. Constitution’s 19th Amendment turns 100.

The amendment has guaranteed all U.S. women the right to vote since its ratification in 1920.

With the first organized women's suffrage event taking place nearly 70 years earlier, the fight — led by the National American Woman Suffrage Association — for women to receive the same civic rights and privileges as men was long and arduous. 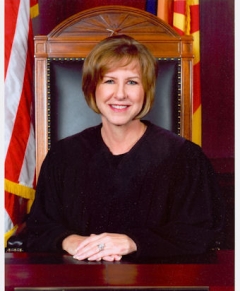 Rebecca White Berch is a former justice of the Arizona Supreme Court and began a five-year term as the court’s chief justice on July 1, 2009. She received three degrees from ASU: a Bachelor of Science (1976), a Juris Doctor (1979) and a Master of Arts in English (1990).

Berch: The 19th Amendment’s 100th anniversary provides a wonderful opportunity to celebrate this civil rights provision and to use it as a springboard to examine the ongoing voting rights struggles in the United States today. Voting is a separate and special kind of right, one that helps achieve some civil justice and equality by ensuring that every vote counts every bit as much as the vote of any other citizen, no matter how rich, high-born, or well educated.

As a native Arizonan, I take pride in the fact that Arizona — the 48th state — voted to grant women this powerful right eight years before the federal constitution granted it. The right to vote helps ensure that women’s voices are heard in determining municipal, county, state and national leadership — a right that to this day is not universally recognized.

But even as we celebrate the grant of the vote to women, we should observe that voting rights continue to be under threat for some U.S. citizens. Even the 19th Amendment, while seeming to broadly grant the right to vote regardless of sex, was flawed: It failed to grant rights to Native Americans and failed to eliminate or address impediments to voting for many classes of voters, including nonlanded, nonliterate and non-English speaking citizens. Attempts to suppress voting rights still occur, in many forms, today. From gerrymandering to voter qualifications and attempts to deny the right to classes of citizens, voting rights are under attack. This 100th anniversary of the 19th Amendment should strengthen our resolve to ensure that the voting rights of all are respected. 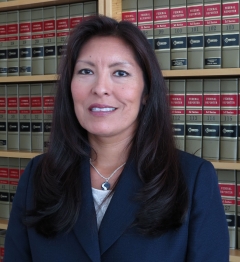 Diane J. Humetewa is a U.S. district court judge for the District of Arizona. As an enrolled member of the Hopi tribe, she is the first Native American woman to serve as a federal judge. Humetewa received her ASU Law JD  in 1993 and is an ASU Law professor of practice.

Humetewa: When I approached 18, my father strongly urged me to register to vote. I was oblivious to the electoral system, so he tried to explain the differences between the parties as best he understood them. To him, it mattered not what party I chose — just that I registered and voted. Now, many years later, I have a better appreciation for what my father was trying to convey — that one’s ability to vote should never be taken for granted.

In Arizona, for example, it took two rounds of court lawsuits, two decades apart, to achieve voting rights for American Indians. In 1928, the Arizona Supreme Court held that American Indians did not have voting privileges because they were considered “wards” of the federal government, and the state Constitution precluded those under guardianship from voting. Then, in 1940, two members of the Fort McDowell Yavapai Nation, one a World War II veteran, attempted to register to vote, but were turned away. After filing suit against the state, the Supreme Court finally ruled that American Indians in Arizona had a right to vote.

This important history is often overlooked. That is why, when I preside over U.S. naturalization ceremonies, I mention it to our newest citizens. Indeed, this year, I specifically remark on the importance of the 19th Amendment for women. It reminds me that there was a reason that my father cherished this right and encouraged me not to take it for granted. I hope that for our newest citizens, this bit of history conveys the same. And, that over time, these lessons of our past help us continue to perfect our systems of democracy. 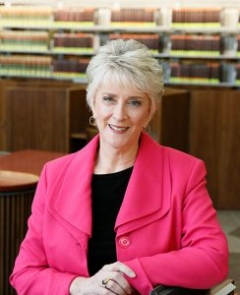 Ruth McGregor is a former justice of the Arizona Supreme Court and served as a law clerk under U.S. Supreme Court Justice Sandra Day O’Connor from 1981 to 1982 and on the Arizona Court of Appeals from 1989 to 1998. She earned her ASU Law JD in 1974.

McGregor: Those of us who came of age in the 1960s were part of, or at least observed, a renewed women’s rights movement. The rights we sought derived from and depended on work done more than a century earlier by the women who sought the basic right to vote.

I marvel at the temerity and tenacity of the women who, against all odds, finally attained the right to vote through the 19th Amendment. The women who met in Seneca Falls, New York, in July 1848 to define their grievances against a government of men that deprived them of the right to vote could depend on none of the traditional bases of power. If they were married, they could not own property and, if employed, had no title to their wages. The women could not attend most colleges and universities, and most areas of employment, including the professions, were closed to them. Most of them had little hope of retaining custody of their children in the event of a divorce. If they had been subjected to spousal rape or abuse, no law protected them. Neither state nor federal courts allowed women to serve on juries, regarding them as too delicate and not possessed of sufficient ability to consider facts rationally. Protective labor laws limited the hours and conditions under which women could work, thereby barring them from many higher-paid and supervisory jobs. They were part of a society and legal system that assigned women a defined and largely unalterable position.

And yet, lacking any of the usual routes to success, these women had the temerity to demand change from those in power. Their Declaration of Sentiments asserted not only their right to vote but also their right to be free of the control of the men who withheld that right. The nerve! Even more amazing were those women of color who risked much to support the right to vote, although they must have suspected – rightly so, it turned out – that they would have a longer road to enjoy the benefits of the constitutional amendment sought.

The temerity of these suffragettes was matched only by their tenacity. For the next 70 years, they continued their movement, although doing so subjected them to scorn, criticism and threats. But their efforts slowly resulted in change, as states began recognizing the rights of women under law, although nearly all those laws did not apply to African American and Native American women. Some states passed laws giving some married women limited property rights; some states provided greater rights to divorce and child custody. Most importantly, some states, particularly those in the West, granted women the right to vote as the 19th century drew to a close and the 20th century began. And finally, after three-quarters of a century of advocacy and effort, the 19th Amendment was adopted and ratified.

As we continue our slow march toward assuring equal rights under the law to all, we would do well to keep in mind the temerity and tenacity that resulted in progress in the past and are essential for progress in the future. Roslyn O. Silver is a senior U.S. district court judge for the District of Arizona. She joined the court in 1994 after being appointed by President Bill Clinton. She was the first woman appointed to the Phoenix division of the U.S. District Court, and the district’s first female chief judge. Silver is a 1971 ASU Law JD.

Silver: At each naturalization ceremony I remind the new citizens they have now acquired the most precious right of every U.S. citizen – the right to vote – which is equal in value to that of every other citizen including presidents, senators and judges.

But it took 132 years before women achieved by constitutional amendment the right to vote, and the inclusion of sex discrimination in the Civil Rights Act of 1964 was only added in an attempt to ensure it would not pass.

I’ve been called a trailblazer because of having acquired a number of firsts in my legal career of which I am very proud, including the first Alumna Professorship at ASU Law.

But my achievements stand on the shoulders of the likes of Margaret Brent, the first woman in 1648 to act as an attorney in the British Colonies (the Maryland Colony) that would later become the United States; Charlotte E. Ray, the first African American woman in 1872 to become lawyer; Myra Bradwell, the first woman in 1890, after a very long legal battle, to be admitted to the Illinois State Bar; and Florence Ellinwood Allen, who in 1914 was the first woman to be elected to a judgeship in the U.S.

And all these accomplishments attained before women had the right to vote. Imagine that. 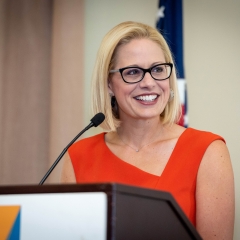 Sen. Kyrsten Sinema has served as the senior U.S. senator for Arizona since January 2019. Before that she served as an Arizona state senator and U.S. representative. Before Sinema went into politics, her occupations included positions as a social worker, criminal defense attorney and adjunct professor. In 2004 she earned her ASU Law JD and a PhD in justice studies in 2012.

Sinema: Arizona led the way in ensuring women’s right to vote. Within the same year of becoming the nation’s 48th state, Arizona became the 10th state to ratify the 19th Amendment. Arizona’s incredible Francis Willard Munds pioneered the women’s suffrage movement in our state — ensuring the voices of Arizona’s women could translate to action, paving the way for me as Arizona’s first female U.S. senator.

In Arizona, we’re no strangers to accomplished women who have defied the odds and made their mark. From Francis Munds, to Sandra Day O’Connor, to Rose Mofford, and so many other incredible women – Arizona women continue to make lasting change for everyday families. Nearly 70% of eligible Arizona women are registered to vote – and hardworking (female) mayors lead Arizona cities large and small including Phoenix, Tucson, Flagstaff, Fountain Hills, Tolleson and Sedona. I’m proud to partner with them and so many powerful Arizona women to continue getting things done for everyone in our state and nation.

The #PG(A)SU experience takes its road show to Boston this week as six Sun Devils earned the right to continue in the #FedExCup Playoffs. ... The #PG(A)SU experience takes its road show to Boston this week as six Sun Devils earned the right to continue in the #FedExCup Playoffs.