Over the past four decades the FORTA Corporation has built a reputation as a leader in the synthetic reinforcement fibers industry. Through a newly announced professorship at Arizona State University, researchers in the Ira A. Fulton Schools of Engineering will work with FORTA to continue advances to develop stronger pavement materials that make roadways safer and more durable.

The FORTA corporation has achieved its status as an industry leader in large part because the company has gone beyond merely manufacturing and supplying its product to the construction, concrete and asphalt industries. FORTA has also put significant effort and investment into innovating the synthetic fibers that are used to strengthen pavements and other building materials, becoming one of the “pioneers in the applications of fiber reinforcement,” said Martin Doody, the company’s vice president of asphalt sales.

Kamil Kaloush, a professor in the Ira A. Fulton Schools of Engineering at ASU, will be able to broaden his academic and research endeavors with support that comes with his new position as the FORTA Professor of Pavement Engineering. Kaloush is pictured speaking at an International Road Federation conference. Photo courtesy of the International Road Federation Download Full Image

One of the bigger leaps forward in the company’s endeavors got off the ground in 2006 when FORTA was working on a project with the Boeing Company in Arizona to implement the use of synthetic fibers in asphalt pavement. For expertise in lab work and testing, the company turned to a local source of expertise: Arizona State University engineers.

The project would result in a research breakthrough and an extensive report detailing the discovery of a new way to use synthetic fibers to boost the performance of pavements, Doody said.

The success of that project opened the doors to a series of collaborations between Pennsylvania-based FORTA and several faculty members and postdoctoral researchers in ASU’s Ira A. Fulton Schools of Engineering.

Among the first involved was Kamil Kaloush, a professor of civil, environmental and sustainable engineering in the School of Sustainable Engineering and the Built Environment, one of the six Fulton Schools.

The productivity of that working relationship over the years has earned Kaloush the distinction of being named the first FORTA Professor of Pavement Engineering, a designation that supplies Kaloush and his lab with $250,000 over the next five years to support scholarly activities. The professorship funding is part of an overall investment of $1 million by FORTA over five years that will also fund research and support for a postdoctoral researcher.

Kaloush directs of the National Center of Excellence on SMART Innovations at ASU — SMART stands for sustainable materials and renewable technologies.

His expertise in pavements and materials has earned him several professional accolades, including the Rubber Pavements Association Outstanding Research Award. It also brought him into leadership positions with the federal Transportation Research Board’s Design and Construction Group executive board, the International Road Federation, the Rubberized Asphalt Foundation and the Arizona Council for Transportation Innovation, among other similar roles. 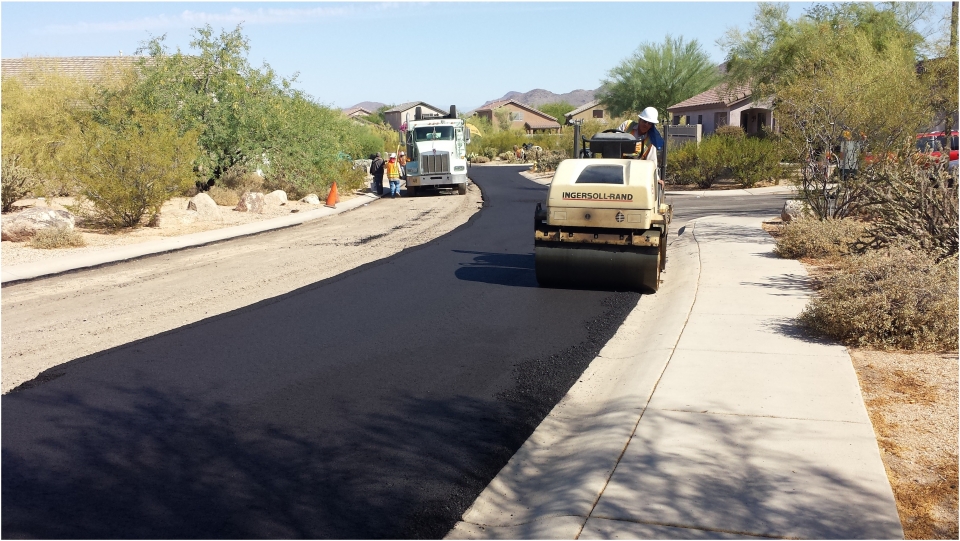 An expanding industry partnership with the FORTA Corporation will enable Arizona State University researchers to pursue advances in synthetic reinforcement fibers. The improved technology can provide stronger pavement materials to make roadways safer and more durable. Photo provided by the National Center of Excellence on SMART Innovations at ASU

Kaloush, who is also affiliated with ASU’s School for the Future of Innovation in Society and Urban Climate Research Center, is a leading member of the Fulton Schools Pavement Analysis and Design Group. For many years, he has led the nationally prominent Arizona Pavements/Materials Conference that brings about 400 professionals to ASU annually.

Pavements play an important role in the world’s transportation infrastructure. Globally, about 90% of roadways are made of asphalt mixtures. In the United Sates, more than 500 million tons of asphalt mixtures are produced annually at a cost of $40 billion dollars, Kaloush said.

“So, it’s critical to have pavements that are less susceptible to deformation, cracking and damaging temperature effects,” he said. “This will translate into road-user benefits such as better ride quality, lower maintenance costs and safer roadways.”

Kaloush’s work with FORTA to date has expanded fundamental knowledge in the pavements field, opening the way to innovations in pavement design, fibers composition and using fibers that extend the life of pavements.

Kaloush, who had 15 years of industry experience before earning his doctoral degree at ASU, says he has a “strong belief in the value of industry collaboration to create excellence” and views the FORTA Professorship and research endowment as “truly an honor and highlight of my academic career.”

FORTA’s support “recognizes the tireless efforts, intensive industry engagement and impactful scholarly contributions Kamil has led for over two decades at ASU,” said Professor Ram Pendyala, director of the School of Sustainable Engineering and the Built Environment. “He has established a global reputation for ASU in pavement engineering and smart materials.”

ASU engineering colleague Professor Mike Mamlouk points also to Kaloush’s talents as an educator, saying he brings a strong commitment to his work in both the lab and the classroom. In particular, Kaloush’s successes reflect a combination of his abilities to be both a strong leader and an effective team player, Mamlouk said.

“Kamil has accomplished something exceptional by bridging researchers, industry and government for a common cause,” said Fulton Schools Associate Professor Hasan Ozer, whose research focus aligns with Kaloush’s pursuits. “Kamil has earned the trust of everyone among his colleagues and those under his leadership. The friendly environment in his laboratory is an inspiration that enables students and researchers to thrive.”

FORTA executive Doody says the company has already benefited from Kaloush’s work on technological advances that enable more precise measurement and evaluation of the performance of pavements and the impacts of the uses of synthetic fibers.

“There are very few people we know of in the industry who have as good a grasp on what is entailed in achieving this kind of breakthrough progress,” Doody said. 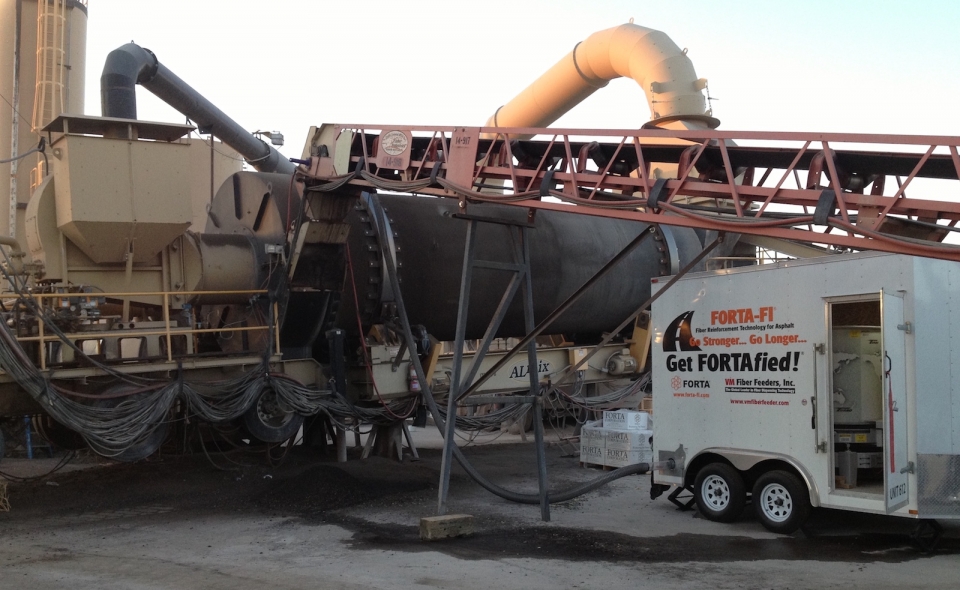 FORTA synthetic fibers are added to a hot aggregate of pavement material in a drum mixer at an asphalt plant. The fibers are mixed in with the material for only a few seconds before an asphalt binding material is injected. The FORTA Corporation has collaborated with ASU engineering researchers for more than a decade to improve its products. Photo courtesy of the FORTA Corporation

FORTA is confident Kaloush will continue to improve on how fiber reinforcement can strengthen the resilience of pavements and other construction materials, Doody says.

He is also impressed by progress in the field already being made by Hossein Noorvand, the civil, environmental and sustainable engineering postdoctoral researcher who will receive FORTA’s funding.

After listening to Noorvand’s doctoral dissertation presentation and meeting with him, Doody says he sees potential for Noorvand to rise to the caliber of other ASU researchers who have collaborated with the company.

With researchers like Kaloush and Noorvand, he said, “I see us continuing the partnership with ASU for many years.”

As FORTA’s liaison for its venture with ASU, Doody is “genuinely passionate” about helping students be better prepared for their engineering careers, Kaloush says.

The company’s support to date has aided undergraduate and graduate student work activities, funded the purchase of testing equipment and sponsored travel to national and international conferences, as well as connected ASU researchers with key industry organizations and partners.

FORTA’s funding will aid the long-term goal “to push the boundary and productivity of FORTA fibers in pavement rehabilitation and construction,” Kaloush said. “It is a credible and cost-effective technology to improve the quality and durability of asphalt pavements.”

A long day of golf was a good day for Cameron Sisk, who after two convincing Thursday wins advances to the quarterfinals of the U.S. Amateur in Bandon Dunes, Ore. ... A long day of golf was a good day for Cameron Sisk, who after two convincing Thursday wins advances to the quarterfinals of the U.S. Amateur in Bandon Dunes, Ore.