It didn’t take Larry Ross, a fifth-generation educator who launched the Omega Youth Leadership Academy in Arizona, long in his career to notice that there’s a group of students who go unnoticed when it comes to setting high goals after high school.

They’re not necessarily the most underprivileged kids, he said. They may not be disruptive in class. But they tend to not be noticed for either gifted programming or learning interventions. Squeaky wheels need to get the grease, but these students are going with the flow. 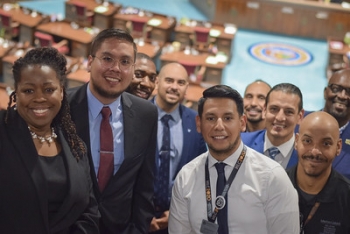 Arizona’s counselor-to-student ratio is 905:1, the worst in the nation. As a former classroom teacher and a parent, Ross has seen firsthand that there are a lot of young men, especially students of color, with potential who tend to fly under the radar.

“I work in high schools where I can see these nice brown and Black boys who easily get overlooked because they’re on track," Ross said. "They don’t cause any trouble. But where were they tapped on the shoulder to level up?”

According to the National Center for Education Statistics, men are less likely to enroll in two- and four-year colleges immediately from high school. About 20% more men than women drop out of college. And women have enrolled in college at higher rates than men for decades; taking all degrees together, women have earned 13 million more than men since 1982.

Knowing the data and that young men of color are particularly underrepresented in higher education attainment, Ross co-founded the Omega Youth Leadership Academy, a year-round mentoring program that empowers middle and high school males of color to further their academic, professional and interpersonal success. 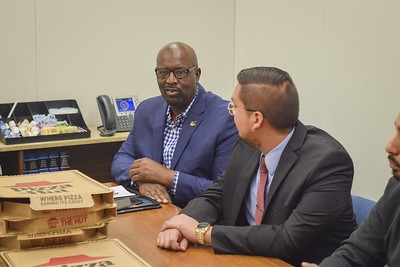 After launching, the group supported Maricopa Community College’s Male Empowerment Conference in October 2019, bringing together more than 20 mentors from various fields to connect with students. Members of the group conducted workshops to further promote education and attainability for young men and share resources to amplify every organization’s work. The group’s bimonthly meetings (now virtual) have resulted in more students taking advantage of Access ASU summer programs and a greater connection to the resources such as the Benji chatbot, which helps students complete their FAFSA for financial aid.

“The group is important because it allows a dynamic group of educators and community members to design and share resources dedicated to intentionally elevating the lives of Black and brown males. It is important to me because in this space, the pathways we create are life-changing,” Ross said.

Quiñonez has said that the group’s commitment to the community and focus on education will provide a framework for others to emulate, while simultaneously increasing the number of men who enroll in higher education.

“As a Latino male with two ASU degrees to my name, I’ve often realized my education has been the deciding factor in many of my accomplishments,” he said. “My education has paved the way for me, and I am incredibly honored to be a part of Males in Higher Education because our work is focused on ensuring others have the same opportunities we’ve been blessed to experience.” 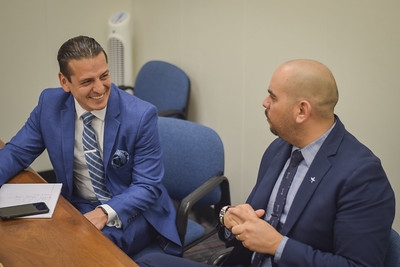 Quiñonez said that while men of color are attending college at a smaller percentage than other men, the group’s focus is to ensure equity in education regardless of gender and background. ASU is part of Achieve60AZ, whose goals are that 60% of adults in Arizona will have a degree or credential by 2030 and there will be 100,000 more enrollments in the next 10 years. The Males in Higher Education group is poised to contribute substantially to that goal with educational leaders working intentionally together.

“While there are many networking groups in the Valley, the Males in Higher Education group stands out thanks to its strong core of active members who are focused on moving the needle forward for all youth in our community,” said Devin Del Palacio, governing board member for Tolleson Union High School District and director of community outreach at Big Brothers Big Sisters of Central Arizona.

“Males in Higher Education is full of subject-matter experts who are willing to collaborate with you at any level. I have found tremendous value in attending the meetings to listen, learn and share. Thank you, Marcelino, and ASU for creating this space for education leaders,” Del Palacio said.

Ross said the group is special and will help more young men overcome the barriers of self-esteem, knowledge and financial limitations that prevent many men from setting high goals for themselves. Thankful for the mentorship he received as a youth in California, Ross was inspired to be someone who young people could approach with questions they were too afraid to ask and for support along the way.

“Seeing how Black and brown kids are viewed and how sometimes people set low expectations for them, I wanted to be someone who could have a culturally relevant conversation with a young brother. I wanted the young brothers to see me as someone they can lean on and depend on,” he said.

“I wanted to become that person and create a platform and a vehicle for young people.”

The fact that the Males in Higher Education group is laser-focused on bringing more young men into the fold is very special, Ross said.

“This is how it’s supposed to be. We’re supposed to work together. ... It’s been phenomenal,” he said.

If you’re interested in learning more or getting involved in Males in Higher Education, reach out to Quiñonez at Marcelino.Quinonez@asu.edu.