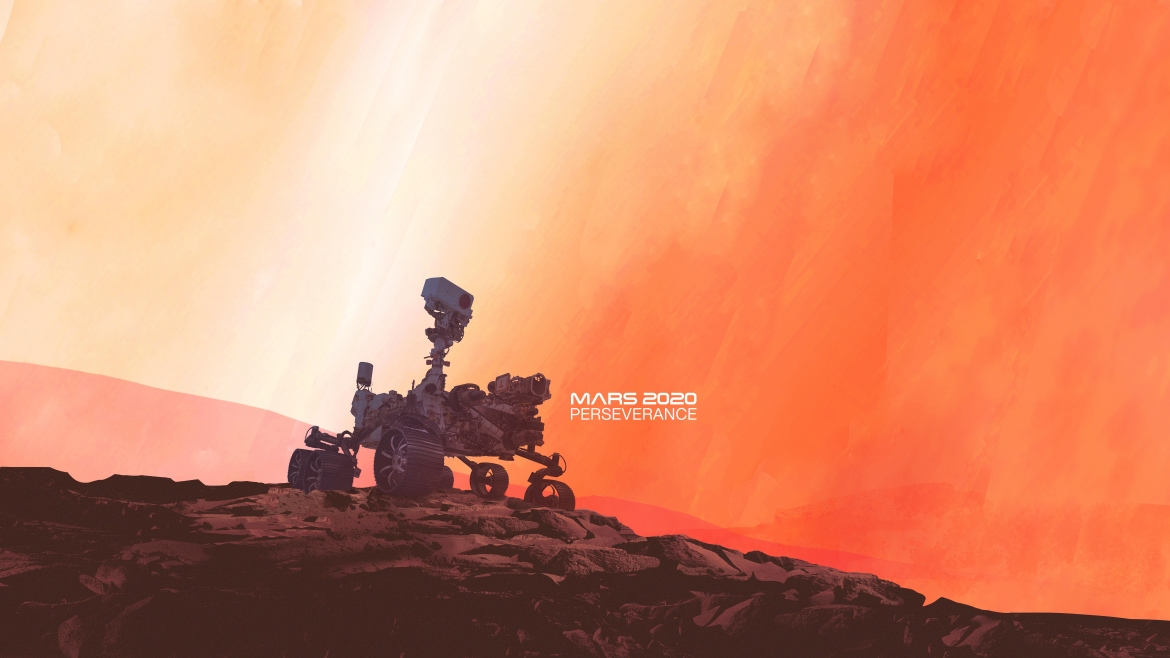 Focusing the eyes on Mars

A look behind Mastcam-Z, the camera system on the new Mars Perseverance rover

On July 30, an Atlas rocket fueled with kerosene and liquid oxygen roars off the Florida coast, hurled into deep space by 3.8 million newtons of thrust at full throttle and accelerating to more than 25,000 miles per hour. A newton (named for Isaac Newton) is a unit of force required to accelerate a mass of one kilogram, one meter per second, every second.

About seven months (and less than 300 million miles) later on Feb. 18, 2021, the spacecraft containing the NASA Mars 2020 mission’s Perseverance rover arrives at Mars and begins its descent to the surface of the red planet. The heat shield reaches 3,180 degrees Fahrenheit. Inside, the rover stays much cooler, under 160 degrees. Atmospheric friction slams on the brakes, slowing the spacecraft from 12,000 miles per hour to about 890 miles per hour.

Six miles from the ground, a parachute deploys. One and a half miles farther down, the heat shield pops off and falls away. The radar system begins to calculate speed and altitude. Less than two minutes later, the backshell and parachute separate. The vehicle is a little over a mile up, traveling at 170 miles per hour.

Eight retrorockets fire, shooing the rover away from the chute and backshell so it all doesn’t crash in a tangled mess. The rover begins to separate as the engines slow descent to about 1.7 miles per hour. Four of the rockets shut down and three nylon ropes (and an umbilical cord like a surfer’s leash) begin to spool out, in what is called the “sky crane maneuver.”

The rover’s wheel and suspension pop into place like the landing gear on a jet. When the weight on the cables reduces, the vehicle “knows” the rover has landed.

Time for the Mars 2020 mission to have a look around. This is where Jim Bell and his team go to work.

Bell, a planetary scientist at Arizona State University’s School of Earth and Space Exploration, is the principal investigator on the rover’s main scientific imaging system.

The rover, which NASA likes to call “a robotic scientist,” weighs 2,200 pounds — about three-fifths as heavy as a Ford Taurus — and sports 23 cameras, more than any rover before. Most of them are for engineering support of the mission. The Navcams (navigation cameras) will acquire panoramic 3D images that will support route planning, robotic-arm operations, drilling and sample acquisition. They work in tandem with the Hazcams (hazard-avoidance cameras) mounted on the lower portion of the rover chassis to provide complementary wide-angle views of the terrain to safeguard the rover against getting lost or crashing into unexpected obstacles. They'll be used by software enabling the Mars 2020 rover to perform a limited amount of self-driving over the Martian terrain.

Bell’s camera will be the science team’s main eyes on Mars.

It’s called Mastcam-Z. The cameras are located near the top of the rover's mast. It's a camera system. And it has zoom capability. Hence, Mastcam-Z.

It’s a mast-mounted camera system with two cameras (left/right) and an electronics box inside the rover. The cameras can zoom in, focus, take monoscopic (one camera) and stereoscopic (both cameras) images with various filters, and acquire video. The cameras will look at the landscape and identify rocks and soil that deserve a closer look by other instruments. The ASU-led team will use these special, designed-for-space cameras to figure out the geology, to help pick out the best rocks for coring, and to look for signs of past life on Mars.

The color quality is similar to that of a consumer digital camera (2-megapixel). It produces image sizes that max out at 1,600 by 1,200 pixels. It can look around in a full 360-degree circle and a full 180 degrees, from straight down to straight up. It also "sees" in color and 3D (stereo). Both lenses can zoom until they match and make a single 3D image. At maximum zoom, it can see something as small as a house fly at the distance of a football field. 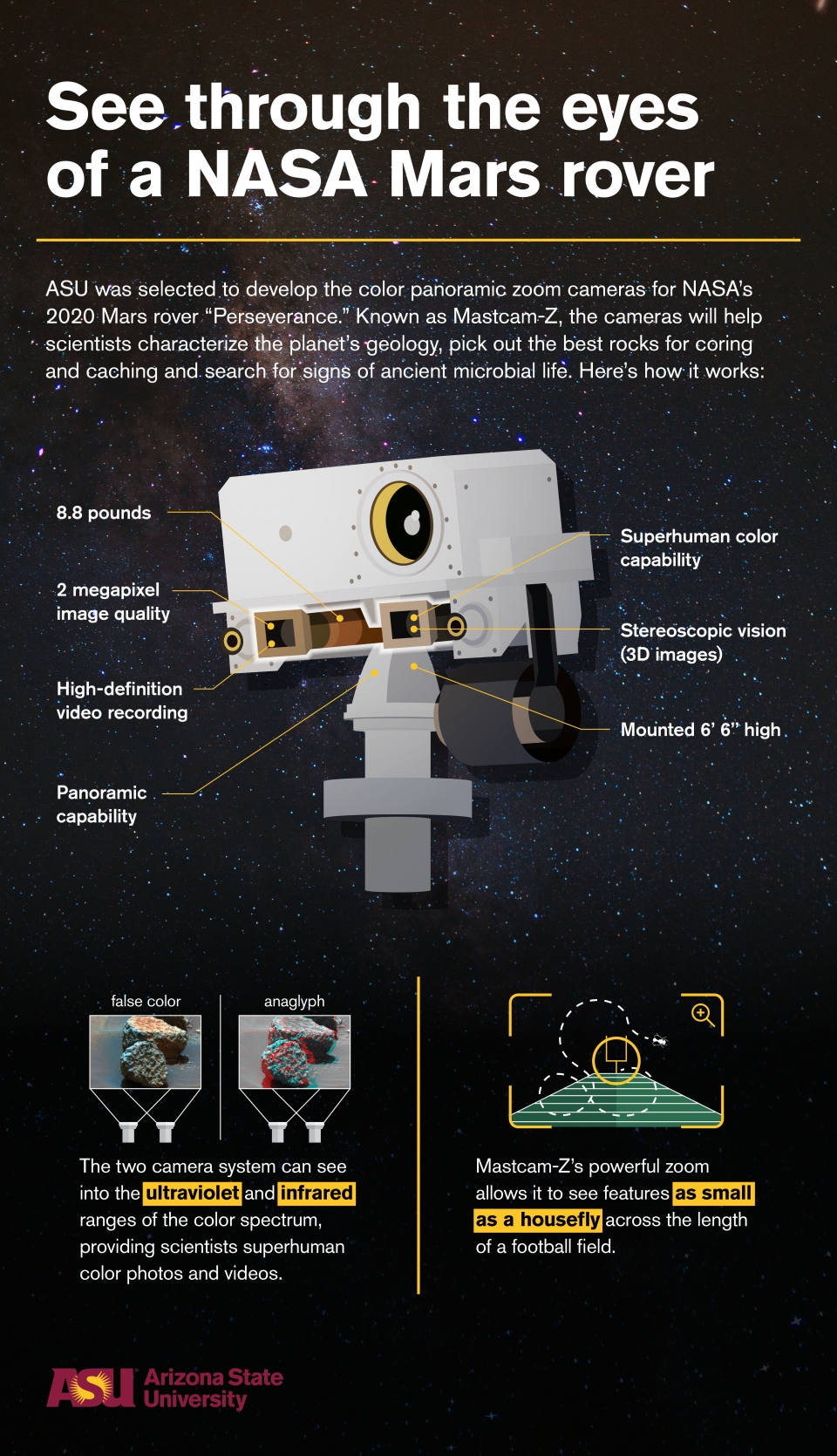 Based on experience, the team changed some of the color patterns. They also put in some magnets to repel the ever-present Martian dust.

The second calibration target has an L-shaped bracket about 4 inches wide with five or six color patches on the vertical and horizontal sides of the L.

“The idea there is the horizontal parts will collect dust from the atmosphere,” Bell said. “The vertical parts won’t. By looking at the difference between those two vertical and horizontal parts, we should be able to tell how much dust has fallen on the cal targets and correct that out.”

Aside from radiation and the roughly 240-degree temperature swings on the red planet, why can’t you just slap a Nikon on a selfie stick and send it up there?

“It’s because we don’t really know how digital sensors in commercial cameras changes with temperature and with the shocks and vibrations of launch and landing,” Bell said. “And for our Mars cameras, we don’t necessarily know if they’re going to give us the same results that they did on Earth under Earth conditions. And you don’t know if they’re going to be the same over time as they gets older and get exposed to cosmic radiation and a harsh environment and lots of temperature cycles. To compensate for anything that might have happened during launch or landing or over time, you bring something with you that you hope doesn’t change and you know what the answer is, and that’s a color calibration target. You take a picture of that before or after you take a picture of the scene around you.”

If you’ve ever seen a professional photographer working in a studio or outdoors at a wedding, they always take a picture of a white card. It’s so they can mark what white is to their camera at that particular time. The sun might be in the clouds and the light is diffuse. The sun might be low and there’s a golden glow on everything. Whatever the case, you want to compensate for that so the image is true to life, so you apply the same correction to your photo.

Hundreds of people worked on Mastcam-Z. Bell’s team at ASU was about 20 people. Another 50 or 60 scientists around the country and around the world worked on it as well. If you count the team that built the cameras at Malin Space Science Systems in San Diego (ASU’s prime contractor for the design, fabrication, and testing of the cameras), that’s another 30 people or so. Their vendors and subcontractors make for even more. Keep going down the supply chain and it’s hundreds and hundreds more people involved, right down to all the people who built things like resistors — and who didn’t even know that their resistors would be going to Mars.

The mission is planned to last at least one Mars year (687 Earth days). It is part of NASA's Mars Exploration Program, a long-term effort of robotic exploration of the red planet. The mission addresses high-priority science goals for Mars exploration, including key questions about the potential for life on Mars, and gathers knowledge and demonstrates technologies that address the challenges of future human expeditions to Mars. These include testing a method for producing oxygen from the Martian atmosphere, improving landing techniques, and characterizing weather, dust and other potential environmental conditions that could affect future astronauts living and working on Mars.

The School of Earth and Space Exploration will be holding a live webinar with professor Jim Bell and the Mastcam-Z team for the live launch of the Mars Perseverance rover on Thursday, July 30, beginning at 4 a.m. PDT. Register to reserve your spot.

Through August 5, Sun Devil Athletics is partnering with Someburros restaurants to provide meals and tickets to a future Sun Devil men's basketball game to frontline workers as a thank you for their continued service in our community during this time. ... Through August 5, Sun Devil Athletics is partnering with Someburros restaurants to provide meals and tickets to a future Sun Devil men's basketball game to frontline workers as a thank you for their continued service in our community during this time.