Sanjiv Sam Gambhir, an esteemed alumnus of Arizona State University's Department of Physics, died July 18 at the age of 57.

Gambhir worked as a professor and chair of the Department of Radiology at Stanford University School of Medicine and was known for his accomplishments as a talented physician-scientist. In addition to his roles in the Department of Radiology, he also served as the Virginia and D.K. Ludwig Professor in Cancer Research and director of the Molecular Imaging Program at Stanford (MIPS), where he earned international recognition as a pioneer of molecular imaging. 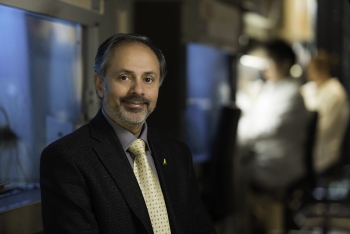 “Sam was a scientist of the highest caliber and a true pioneer in molecular imaging,” said Nancy Gonzales, dean of natural sciences at The College of Liberal Arts and Sciences. “His background as a physics-mathematician turned physician-scientist enabled him to have a revolutionary impact on medical practice, particularly his innovations involving PET reporter gene imaging for early cancer detection. In addition to his remarkable career, he was known for being a kind and generous mentor and collaborator. This is a sad loss for medicine and all who knew him.”

One of Gambhir’s former professors says his brilliance was evident early on. Regents Professor Stuart Lindsay, director of the Center for Single Molecule Biophysics in the Biodesign Institute as well as the Nadine and Edward Carson Presidential Chair of Physics and Chemistry, recalled teaching young Gambhir.

“I first knew Sam as an undergraduate in the first class I taught at ASU, back in 1979 when Sam was a senior at the tender age of 16. It was the theoretical mechanics class for physics seniors, and I was enough of a novice teacher that I selected the, unbeknownst to me, notoriously hard textbook by Goldstein,” Lindsay said. “He politely corrected my mistakes. He mentored his fellow students. And I used his homework sets as my grading template.”

After earning his bachelor’s degree in physics from ASU, Gambhir continued on, receiving his MD and PhD from UCLA.

“Sam's PhD research resulted in the development of positron emission tomography (PET scans) and he went on to a number of distinguished academic appointments,” Lindsay said.

Gambhir served as a member of Bio-X, Cardiovascular Institute, Stanford Cancer Institute, Wu Tsai Neurosciences Institute as well as a faculty fellow for Stanford ChEM-H. According to Stanford Medicine, he authored nearly 700 peer-reviewed articles, several books, filed for 40 patents, and his lab’s work was featured on dozens of journal covers. Gambhir’s awards and honors are extensive, including the IEEE Marie Sklodowska-Curie Award, Benedict Cassen Prize and Most Influential Radiology Researcher award.

In recent years, Gambhir’s work focused on the early detection of cancer and he established the Precision Health and Integrated Diagnostics (PHIND) Center. His connection to the disease was personal, having lost his son, Milan, to cancer in 2015 at the age of 16.

“Sam, ever the physician, was a key part of his son's medical team,” Lindsay said. “Sam came to ASU to speak at our Physics Awards ceremony a year later. We were awed by the humility and kindness of this great scientist, and many of us were moved to tears as he recalled the anniversary of his son's death.”

Physics Department Chair and Professor Peter Bennett described Gambhir as a warrior on the front line of cancer research.

“He was easily the most highly accomplished alum I have ever met, but also a completely modest and unassuming person,” Bennett said. “We at ASU and Stanford have lost a friend and colleague, while the world has lost a truly exceptional scientist.”

Arizona State sophomore tight end/H-back Ethan Long was one of 114 student-athletes named to the Wuerffel Trophy preseason watch list, as announced by the award's organization on Thursday. ... Arizona State sophomore tight end/H-back Ethan Long was one of 114 student-athletes named to the Wuerffel Trophy preseason watch list, as announced by the award's organization on Thursday.