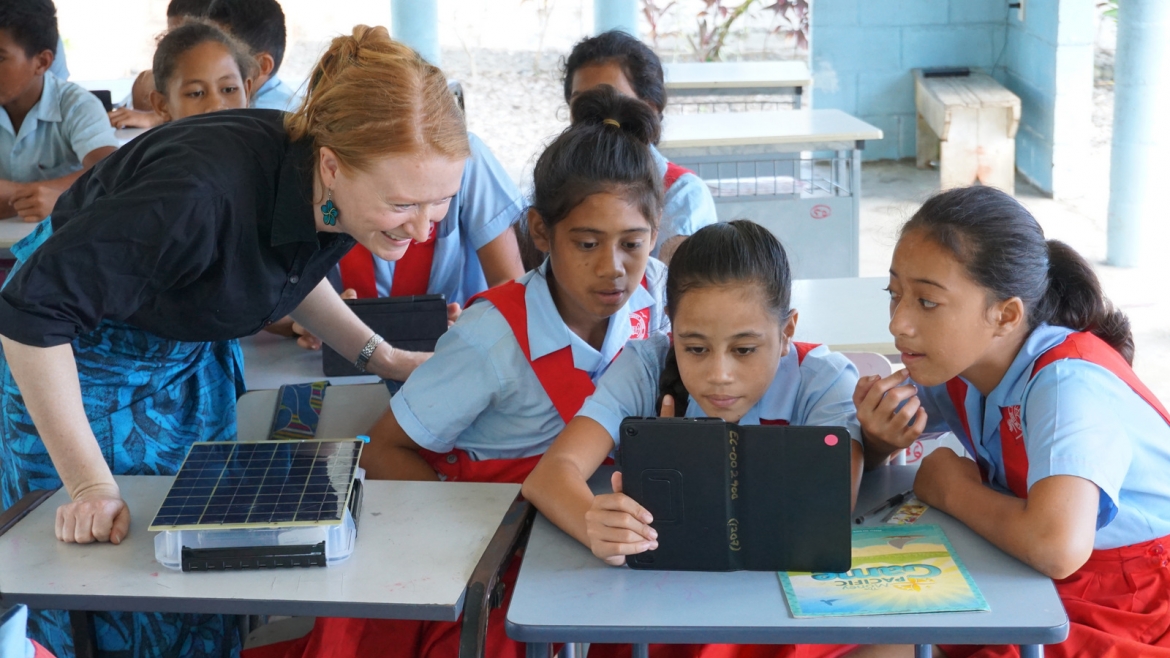 The Peace Corps and Arizona State University have signed a strategic agreement that will help Peace Corps volunteers in the field advance their humanitarian work by using an educational device invented by an ASU professor.

Under the memorandum of understanding, which was marked with a virtual celebration on July 10, Peace Corps volunteers will have wide latitude to use the SolarSPELL portable library, created by Laura Hosman, an associate professor in the School for the Future of Innovation in Society at ASU. The solar-powered device has already been used informally by Peace Corps volunteers who serve in communities without internet service.

ASU ranks eighth in the United States for sending graduates into the Peace Corps, which ASU President Michael Crow said is one of the most important organizations in the U.S. government.

“It’s an exemplar of a whole new logic of sending talent and energy and creativity and youth — and experience, these days — to countries around the world where we partner to solve problems and work together,” he said during the Zoom celebration.

Jody Olsen, director of the Peace Corps, said the formal agreement strengthens the existing collaboration between volunteers and ASU in international development.

“Peace Corps posts and ASU’s SolarSPELL team have collaborated in multiple countries to provide training and to integrate libraries through the use of the SolarSPELL units into local community-based capacity building projects,” she said.

“To Peace Corps volunteers, SolarSPELL is a gift in how it will help volunteers integrate with community partners and school partners.”

The agreement is a dream come true for Hosman, who developed SolarSPELL in 2015 and has distributed hundreds of devices around the world.

“What we’ve come up with at SolarSPELL is a concept that can go anywhere,” she said.

“And now we’re working with a trusted partner. The government has invited the Peace Corps to be there, and in many cases they have been in that country for 50 years plus.”

Hosman’s journey started 10 years ago, when she visited teachers in remote schools in the Caribbean and Pacific islands.

“They had been handed tablets or laptops and told simply, ‘Transform how you teach using this new technology to bring about amazing results. Go,’” said Hosman, who also is an associate professor in the Polytechnic School in the Ira A. Fulton Schools of Engineering and a senior sustainability scientist in the Julie Ann Wrigley Global Institute of Sustainability.

But the teachers were not trained and didn’t have internet access or even electricity.

So Hosman challenged her engineering students to create a solar-powered library that would fit into a backpack, be resistant to rain, humidity, sand and heat, and work in communities that have limited or no internet connectivity.

But even after creating and distributing the devices, Hosman still was stuck at how to provide the sustained training that local teachers would need to use it.

“I had hit a wall and I didn’t know how to move forward,” she said. “And then one day a Peace Corps volunteer emailed me.”

The volunteer was interested in using SolarSPELL, and after learning about the Peace Corps, Hosman realized the volunteers were ideal liaisons because they spend two years at a posting, often in small, remote villages. The library content is hyper-localized, so having advocates embedded in the field can help determine the kind of information that is most helpful.

“They reach out because they know their communities would benefit, and that’s how you know you’ve really found the right partner,” she said.

The agreement will allow SolarSPELL to greatly expand around the world because Peace Corps volunteers are in more than 100 countries.

Assistant Professor Laura Hosman has traveled with ASU students to a number of Pacific Islands (including Vanuatu, pictured), where they worked with Peace Corps volunteers on training and implementation of the SolarSPELL digital library. Photo by Bruce Baikie

“We are able to demonstrate that there is a way to scale up,” she said. “There are few things in the international development arena that can scale and can fit that concept of going around the world,” she said.

The agreement will help another way: SolarSPELL can now leverage its connection to the Peace Corps for fundraising. Any expansion into new countries will be funded by SolarSPELL, which raises donations for its work.

The SolarSPELL device is simple and inexpensive — the parts cost less than $200. Each case includes a small solar panel, a microcomputer and a micro digital memory card, which contains all of the library content and some code that allows it to be accessed by any type of browser. The device creates a Wi-Fi hot spot, so no electricity or internet connection is needed. Students then connect any Wi-Fi capable device, such as smartphones, tablets or laptops, to access and download the content. Some of the SolarSPELL devices include the tablets too.

“It looks and feels like you’re online even though you’re offline,” Hosman said.

Many Peace Corps volunteers are just out of college and are digital natives. They will be key in helping to develop digital literacy among people who have never encountered the internet.

“They don’t surf to education sites because they don’t know those sites exist, and they never develop skills that we might take for granted of knowing when something is suspect or not trustworthy,” she said.

When talking to people in remote communities, Hosman has asked what they would be interested in if they had connection.

“Facebook is a huge service to connect with loved ones and to find out when their cousin had a baby. It’s fulfilling a big need but it’s limited and it’s a for-profit company that makes its profits off of emotions.

“So this an opportunity to build information literacy skills and they can become savvy users of information,” she said.

Currently, the COVID-19 pandemic has suspended most travel. The Peace Corps volunteers returned to the U.S. in March and the SolarSPELL team has stayed home. Three new SolarSPELL programs have been paused: a nursing library in Juba, South Sudan; a primary and secondary school library at a refugee camp in Ethiopia that’s in conjunction with Education for Humanity; and a Spanish-language library to be used at the Arizona-Mexico border.

But work on the libraries continues. Typically, up to 60 students are working on curating digital content every semester, mostly drawn from open-source sites.

And SolarSPELL is still helping. In South Sudan, schools are closed because of the pandemic, although lessons are being broadcast over the radio.

“But it’s very difficult for students to make progress because there are no textbooks or learning materials to follow along with the radio lessons,” Hosman said.

“So we put the devices on a motorbike and send them around to the schools, where the parents can come and download the textbooks to take them home.”

“I don’t see a better partner for us out there to do what I have wanted to do since the beginning of my academic career, which is to help other teachers out there to see technology as a friend and not a foe,” she said.

Music theorist Nicholas Shea will join the ASU School of Music, Dance and Theatre as assistant professor of music theory beginning in August 2020.“We are thrilled to have attracted Nicholas Shea to our faculty,” said Heather Landes, director of the school. “Dr. Shea’s research interests in popular music performance practice and meter perception complement our diverse offerings and will con...

Music theorist Nicholas Shea will join the ASU School of Music, Dance and Theatre as assistant professor of music theory beginning in August 2020.

“We are thrilled to have attracted Nicholas Shea to our faculty,” said Heather Landes, director of the school. “Dr. Shea’s research interests in popular music performance practice and meter perception complement our diverse offerings and will contribute greatly to our curriculum.” 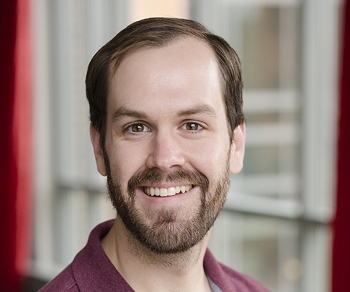 Shea specializes in the relationship between performance practice and the transmission of musical style. His research investigates how instrument performance and the body can be used to better understand how styles, such as popular music, are developed and transmitted to listeners in real time.

“The new popular music degree program in the School of Music, Dance and Theatre is exciting for me as there is rarely room made in traditional music conservatories for musicians who may have not had access to formal instruction before enrolling,” said Shea, a self-taught bass player. “Because the school is creating a program for popular-music artists who are not formally trained and do not necessarily hold the same priorities as music theorists, I knew I wanted to be a part of this important step forward.”

As a graduate of three different state-school music programs, he has performed, studied and taught music in a variety of settings, from ensemble performing and jazz trio gigging to elementary and high school student teaching.

“Teaching music has always been an important part of my identity as a musician, and I am consistently energized by the time I spend the in the classroom,” Shea said.

With a background in jazz and popular music, Shea said he is able to provide students with the resources to study repertoires and composers that have traditionally been overlooked in music theory. He also uses music cognition training to foster student engagement with more perceptually accessible features of musical organization such as timbre, texture and rhythm.

Shea plans to continue his research on instrument performance and style at ASU and looks forward to working with the theory faculty to reshape the theory core curriculum, in addition to offering graduate courses on popular music, contemporary performance practice and empirical music analysis.