I am also a part of the broader African American community and culture that needs you to hear us when we say Black Lives Matter. Not just listen to the words, but really hear them.

Mi-Ai Parrish, the Sue Clark-Johnson Professor in Media Innovation and Leadership at the Cronkite School and former publisher of the Arizona Republic, is among three Arizona State University women selected to participate in “Phoenix Herstories,” a photography and video project that commemorates the ratification of the 19th Amendment by honoring prominent female leaders in Phoenix.In addition t...

Sun Devil Soccer unable to generate goals in loss at No. 1 UCLA

‘It shows your commitment to academic excellence’: Nearly 70 Sun Devils Balance Athletics and Academics in Barrett, The Honors College

Sun Devils in the NFL Update

Mi-Ai Parrish, the Sue Clark-Johnson Professor in Media Innovation and Leadership at the Cronkite School and former publisher of the Arizona Republic, is among three Arizona State University women selected to participate in “Phoenix Herstories,” a photography and video project that commemorates the ratification of the 19th Amendment by honoring prominent female leaders in Phoenix.

In addition to Parrish, Kimberly Scott, professor and founding executive director of the Center for Gender Equity in Science and Technology, and Kenja Hassan, director of cultural relations with the Office of Government and Community Engagement, were chosen for the project. 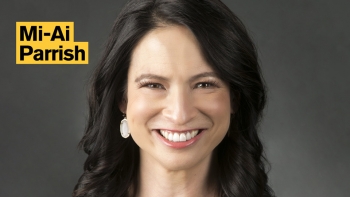 “Phoenix Herstories,” a creation of the Celebration Taskforce — a citizen’s commission made up of the city of Phoenix’s Women’s Commission, Arts Commission and Community Champions — is part of the 2020 centennial celebration of the ratification of the 19th Amendment, which guaranteed women the right to vote. Phoenix will host the celebration on Aug. 18, the amendment’s anniversary.

“My grandmothers were born without the right to vote. My mother immigrated from a country where she did not have this right that is foundational to a democracy,” Parrish said. “I stand on the shoulders of thousands of women, across generations, who fought for this for all of us. I am so humbled and honored to be part of this commemoration and help represent those heroines.”

The photography project will culminate in an exhibit showcased in the Phoenix City Hall atrium on the anniversary of the amendment before traveling to various locations and community events during the remainder of 2020.

The exhibit and the video testimonials also will be housed on a website that will include women describing their voting experiences, a link to the history of the 19th Amendment, a listing of future events focused on the 19th Amendment, and some curricular guides for teachers and students that not only highlight historical aspects, but connect the history to today’s female leaders and how they choose to engage in their community.

“I am proud to be part of this recognition because I am proud of Arizona for becoming a state with women’s right to vote already in place,” Hassan said. “Arizona’s Permanent Early Voting List (PEVL) is another point of pride. By being on the PEVL, I haven’t missed a single election. I honor the people who sacrificed in the past and the people who work hard today to make sure we can all participate in electing our leaders. Voting is a privilege and a responsibility.”

For Scott, the project’s mission aligns with the Center for Gender Equity in Science and Technology’s goal of providing more education opportunities for girls.

“Our nation is suffering from two pandemics: one health and the other cultural. More than ever before, all individuals who can vote must do so. Since women make up the majority of our nation's population, we must use our political agency. More importantly, we must ensure girls in our K–12 public schools, the majority of whom are girls of color, receive informed and intentional civic education,” she said.