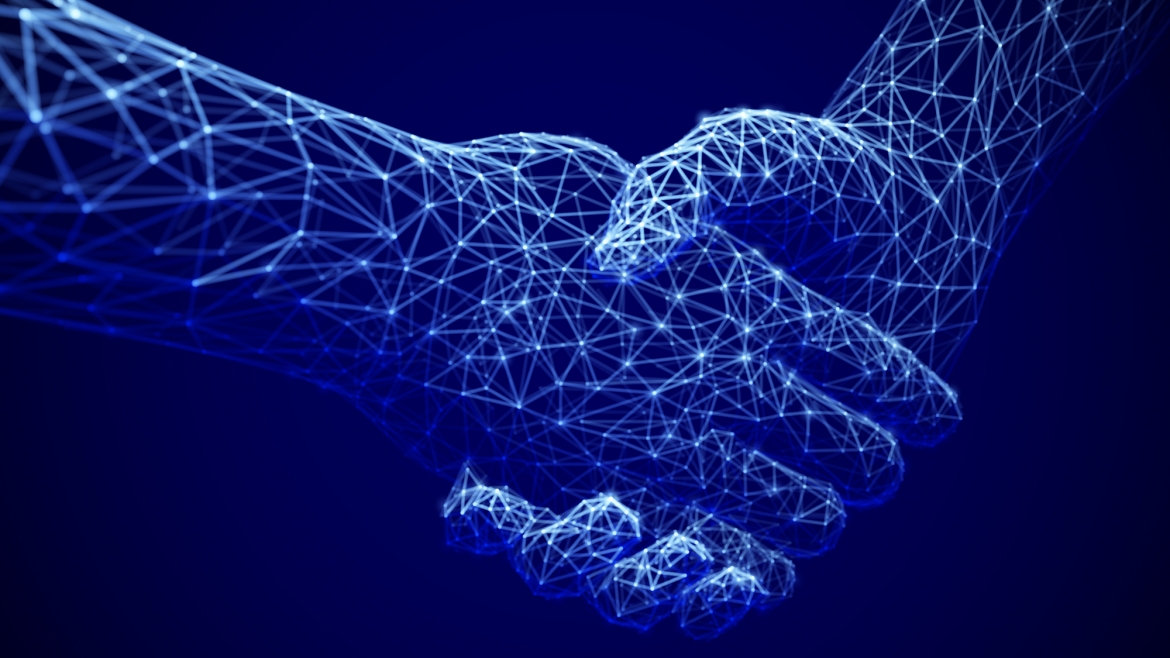 There was no pandemic when National Handshake Day was conceived.

June 25 marks the 15th anniversary of the commemorative day, dedicated to the history and celebration of one of the common greetings shared between two people, especially in Western cultures.

Many people think the handshake might go the way of the curtsy in light of COVID-19. However, history shows that what your grandfather taught you will always endure — nothing substitutes for a firm grip and a look in the eyes.

“The fact that there’s a day named after the handshake demonstrates the importance human beings place on cooperation and solidarity,” said Laura Guerrero, a professor in Arizona State University's Hugh Downs School of Human Communication. “The handshake is a very positive symbol.”

The origin of the handshake is murky, but Guerrero said many historians believe it dates back to ancient Greece. She said the handshake then was used as a way to convey peaceful intention while at the same time proving they weren’t hiding a dagger up the sleeve or holding a weapon.

The anecdotal evidence was supported and illustrated on art, vases, gravestones and stone slabs of that era.

The modern handshake has been equally hard to trace, though most believe it was popularized by 17th-century American Quakers who preferred it over bowing, curtsying or tipping a hat.

“A lot of people who came to America were unhappy with the social hierarchy structure in Europe, especially in Britain,” Guerrero said. “It became a sign of equality to shake hands.”

“The handshake is there for a reason, especially if you’re trying to establish a business or personal relationship,” Martin said. “I’ve been in situations before where I’ve tried to be culturally sensitive and bow and the other person is trying to shake my hand. That demonstrates both sides are trying to accommodate.”

Not all cultures share the same greeting rituals. In Japan, people bow. In Thailand, they practice the “wâi”, a slight bow with the palms pressed together in a prayer-like fashion. It’s similar to “namaste” in India, which is a folded hand gesture and a gentle bow of the head and neck. In France, they employ “la bise” — an air kiss on each side of the cheek. (The French hated the handshake and formed a society in 1884 to abolish it, calling it a “vulgar English innovation.”)

But perhaps the handshake’s greatest attribute is its resilience. Its survived wars, revolutions, pandemics, plagues, viruses and other medical maladies, according to Guerrero.

“It’s interesting because the handshake is like a movement and is cyclical,” Guerrero said. “Even before COVID-19 hit, men in the United States were the first to do the fist bump. Now that’s evolved into an elbow bump because of the pandemic … history shows that it comes back in some form or another.”

Martin said the need for human contact and demonstrating affection is too strong for the handshake not to make a comeback.

“If the handshake doesn’t come back in the same exact way, there will be a variation of it in some form or another,” Martin said. “It’s awkward for now, but it won’t always be that way. We’ll find ways to improvise because this pandemic won’t last forever.”

Editor’s note:  This story is being highlighted in ASU Now’s year in review. Read more top stories from 2020.Arizona State University Executive Vice President and Chief Research and Innovation Officer Sethuraman “Panch” Panchanathan has been named the 15th director of the National Science Foundation, unanimously confirmed by the U.S. Senate on June 18 after his December 2019 nominatio... Arizona State University Executive Vice President and Chief Research and Innovation Officer Sethuraman “Panch” Panchanathan has been named the 15th director of the National Science Foundation, unanimously confirmed by the U.S. Senate on June 18 after his December 2019 nomination by President Donald J. Trump.

During his six-year appointment, Panchanathan will be responsible for overseeing NSF staff and management, program creation and administration, merit review, planning, budget and day-to-day operations. He also will direct the federal agency’s mission, including support for all fields of fundamental science and engineering, keeping the U.S. at the leading edge of discovery.

“Right now, the world faces significant scientific challenges — most obviously a pandemic,” Panchanathan said. “But in addition to providing creative solutions to address current problems, our eyes are on the future, leveraging partnerships at every level and encouraging diversity that breeds new ideas for a robust pipeline of young scientists. It is only through that expansive perspective on the scientific and engineering enterprise that we can recognize the brightest ideas and nurture them into tomorrow's world-class technological innovations.”

Panchanathan identified three pillars of his vision for NSF:

He has a history of doing exactly those things. His current position, which he has held for the past nine years at Arizona State University, has allowed him to lead the Knowledge Enterprise, which has advanced research, innovation, strategic partnerships, entrepreneurship, and global and economic development. During his time with Knowledge Enterprise, ASU has been named the most innovative university in the nation by U.S. News and World Report for five straight years, beginning in 2015.

“World-class science requires talented scientists and engineers drawn from every corner of our nation — from remote rural areas to the largest urban centers. The best science is shaped by a wide range of perspectives,” said Panchanathan, who is a also professor of computer science and engineering in the Ira A. Fulton Schools of Engineering at ASU, the nation’s largest and most comprehensive engineering program. “I want people to get excited by science and have the opportunity to be part of the scientific enterprise. It is our responsibility to inspire talent and find ways to catalyze innovation across our country. NSF has a proven record in this area.”

For more than two decades at ASU, Panchanathan has focused on developing people-centric technologies and fostering innovative research and initiatives to change society for the better. He was a founding director of ASU’s School of Computing and Informatics, which went on to become the School of Computing, Informatics, and Decision Systems Engineering, one of the six Fulton Schools.

Panchanathan is the Foundation Chair in Computing and Informatics at the School of Computing, Informatics, and Decision Systems Engineering. He also founded the Center for Cognitive Ubiquitous Computing, where he researches human-centered computing to improve quality of life through artificial intelligence and machine learning techniques.

"Panch has led ASU to new heights of achievement in our quest to be known both for our excellence and accessibility," said Mark Searle, executive vice president and university provost. "Through his leadership, he has enabled ASU to achieve incredible advances in research and scholarship, to expand our entrepreneurship and innovation efforts and expand our global partnerships and engagements. It has been a great pleasure to collaborate with Panch in all ways, and he has been a great partner in our efforts to advance ASU. Now he will bring his leadership talents to public service at the national level, and all of science will be better for his efforts."

For the past five years, Panchanathan has been a member of the National Science Board, the oversight body of the NSF whose members are appointed by the president. During this time, he helped formulate the NSF’s strategic plan for the organization’s $8.3 billion annual budget to ensure the nation’s bright future in science and technology. The organization funds nearly 25% of all federally supported university research.

Former NSF Director France Córdova said in a statement that Panchanathan has been a “bold, energizing presence” on the National Science Board.

“This position requires the ability to connect with all stakeholders in the U.S. science and engineering community, walking the fine line between serving and leading,” Córdova said in the NSF’s statement on Panchanathan’s nomination. “Panch has the character and knowledge that make him an ideal fit for the job.”

At ASU, Panchanathan has led Knowledge Enterprise as the organization’s executive vice president. Under his leadership, the university’s research enterprise has grown nearly four times in size, with more than $640 million in research expenditures. In 2019, ASU was ranked seventh nationally in total research expenditures for universities without a medical school, and it is ranked among the top universities in the world for patents.

Panchanathan has aligned the university’s research and partnership initiatives to nationally important issues, including renewable energy, sustainability and personalized health. These activities have drawn top talent and extensive resources to ASU to conduct research that makes positive changes locally, nationally and globally.

“Panch’s confirmation as director of the National Science Foundation is a powerful validation of his success in advancing ASU’s research and innovation enterprise,” said Kyle Squires, dean of the Fulton Schools. “His clear vision, passion and ideas have been instrumental in helping drive excellence across the entire research community at ASU. The strategic partnerships developed and thoughtful positioning of our research bodes well for our future growth, and the approaches cultivated here will be important on a national level as well.”

Panchanathan’s efforts at ASU to foster research and entrepreneurship innovation have also gained the attention of Arizona government leaders through the contributions his work has made to boosting the state’s economy. He was appointed the governor’s senior adviser for science and technology in 2018 and served on the Arizona Secretary of State Technology, Transparency and Commerce Council.

With his long record of leading research enterprises, Panchanathan was recently invited to testify before the U.S. Senate Subcommittee on Science, Oceans, Fisheries, and Weather about ways the U.S. can stay competitive in the global research field. Panchanathan’s plan included bolstering research, student, partnership and economic development ecosystems in addition to welcoming talent from around the world.

Panchanathan is the second American of Indian origin to be appointed NSF director and is an example of how international talent helps to put U.S. research at the top of the global science landscape.

Over the course of his influential career, Panchanathan has been elected a fellow of the National Academy of Inventors, the American Association for the Advancement of Science, the Canadian Academy of Engineering, the Institute of Electrical and Electronics Engineers, and the Society of Optical Engineering. He has served as editor-in-chief of the IEEE Multimedia Magazine and is also an editor or associate editor of several international journals and transactions.

Panchanathan has published more than 485 papers in conference and refereed journals and has been a chair, a program committee member, an organizer of special sessions and an invited speaker and panel member in many professional conferences and university and industry symposiums.

The new NSF director credits much of his success to empowering others to achieve their greatest potential, including the more than 150 graduate students, postdoctoral research assistants, research engineers and research scientists he has mentored throughout his career, many of whom now occupy leading positions in academia and industry.

Panchanathan will be taking an extended leave of absence from ASU as he serves this six-year appointment. ASU’s Knowledge Enterprise Chief Science and Technology Officer Neal Woodbury will assume the bulk of Panchanathan’s oversight and engagement activities, effective immediately. As interim executive vice president, Woodbury will continue to advance ASU’s research, economic development, international development and corporate engagement and strategic partnership agendas, as well as oversee activities related to Knowledge Enterprise operations, institutes and initiatives. In addition to this new role, Woodbury will remain a faculty member at the School of Molecular Sciences in the College of Liberal Arts and Sciences, a senior sustainability scientist with the Julie Ann Wrigley Global Institute of Sustainability and a faculty member of the Biodesign Center for Innovations in Medicine and the Global Security Initiative. He will also serve as CEO of Science Foundation of Arizona.