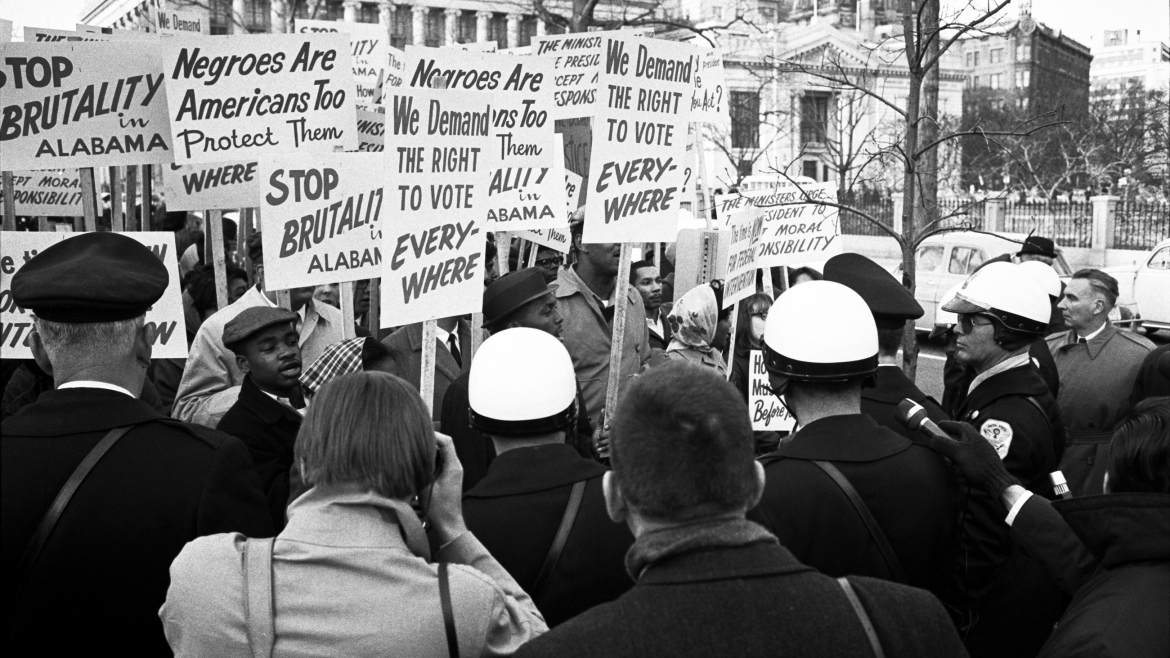 Explosive imagery from the George Floyd protests has evoked inevitable comparisons to the civil rights movements of the 1960s.

Digital media is bringing images of these incidents of civil unrest into the devices in our hands the same way that television brought it into living rooms more than five decades ago.

Only time will tell if 2020 will have the same impact as those meaningful protests of yesteryear, but one Arizona State University historian believes it just might.

Brooks D. Simpson, an ASU Foundation Professor of history in the College of Integrative Sciences and Arts, studies American political and military history as well as the American presidency, specializing in the era of the Civil War and Reconstruction.

ASU Now spoke to Simpson about what’s happening on America’s streets, how it compares to the 1960s and what history teaches us about the importance of media coverage of protests. 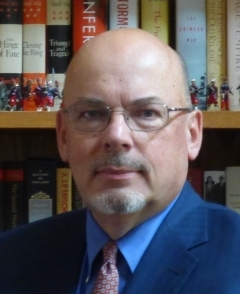 Question: Does the recent wave of protests sparked by the death of George Floyd in police custody compare to what happened in Watts, Detroit and Harlem in the 1960s?

Answer: At first glance, yes, because those events in the 1960s, along with explosions in the Bronx, New York, in 1977, Los Angeles in 1992, and Ferguson, Missouri, in 2014, to highlight a few select instances, seemed to follow a predictable narrative in a popular memory that tends to overlook or forget critical differences and details. People, especially those who experience these events through television, anticipated a predictable pattern: peaceful protest due to an act of violence, the appearance of state agents prepared to use force to maintain order, nonviolence giving way to violence, and then rioting and looting, each of which presents vivid images that captures an audience’s imagination. In these constructed narratives, protests — and opposition to them — lead to looting: Since most people generally disapprove of looting, the protests come under critical scrutiny by vaguely associating them with looting, which is used to discredit the protests. Initially media outlets framed and fed that narrative, so the comparisons are understandable. Whether they were meaningful in helping people understand what was actually happening is another question altogether.

In this case, what ignited the recent wave of protests and the ensuing tsunami of calls for reform were several instances of the excessive use of force by law enforcement authorities against Black victims, the most famous of which is George Floyd. Floyd’s death proved to be the tipping point because it was videotaped, and because it presented rather clearly the excessive use of force by a white police officer against a Black man. A dispassionate viewer could not be but shocked at what they saw.

It’s noteworthy that most observers looked first to the explosions of the late 1960s instead of remembering the march from Selma to Montgomery in 1965 or Bull Connor and his dogs in Birmingham. The similarities seem simple to comprehend, even if they were superficial at best. Yet the images of fire hoses and vicious dogs, of burning churches and Confederate flags, did much to mobilize public support for civil rights.

Q: How is media coverage affecting how this movement is perceived?

A: The protestors persisted. They regained control of their narrative. They distinguished themselves from the looters. Some even challenged the looters. The looting subsided while the protests continued, increasing in passion and commitment while attracting broader support. Their audience, already grappling with the consequences of the COVID-19 pandemic, including quarantines, unemployment, illness and death, were already approaching a breaking point, in part because of the controversies surrounding how the president of the United States had addressed those challenges. Many Americans, used to seeing news reports about the pandemic, now watched as the protests unfolded, violence erupted, and looting exploded … and then subsided, leaving the protesters not only as resilient as ever, but also attracting broader support. Most of the media finally got the story right. More white people understand white privilege and are moved by fundamental injustice to march and raise their voices for change. This time, thoughts and prayers won’t be enough.

This time, people get it. A decade ago, for example, one would have been hard pressed to imagine the removal of Confederate monuments from southern cities, for example. Now, in the culminative wake of Charleston, Charlottesville and George Floyd’s murder, that process accelerates, with the monuments along Richmond’s famed Monument Avenue disappearing from the former capital of the Confederacy just as they went into storage in Baltimore and New Orleans. And people get it in part because they now have seen what they had once only heard about, making oppression and violence real and inescapable.

Q: How vital is capturing these incidents on film/tape/digital media in moving the needle on any movement?

A: In 1971, Gil Scott Heron released “The Revolution Will Not Be Televised.” Nearly 50 years later, it is being televised. The ubiquitous presence of digital recording devices ensured that if someone could record it, someone would. The killing of George Floyd invited viewers to see for themselves what for decades Black people had told the rest of America was happening. There was no escaping those brutal facts, especially when the murder was replayed time and time again. More than that, the video cultivated the emergence of empathy … the same sort of empathy against Black oppression that Harriet Beecher Stowe elicited in “Uncle Tom’s Cabin” back in 1851 or network coverage that the civil rights movement in the American South fostered in the 1960s. Coverage over the next several weeks (of the Floyd protests) revealed more instances of police forces out of control, with memories of Chicago in 1968 replacing those of the burning cities of the '60s and '70s.

Viewers saw protestors persisting in peaceful remonstrances, with prominent people joining them, and with some law enforcement displaying their support of protests against unwarranted police behavior. With many people just emerging from their homes in the age of pandemics and quarantines, there was an audience, already unnerved by recent events, ready to view and be shocked by such behavior, in large part because most white people knew that George Floyd suffered and died as he did because of the color of his skin. You didn’t have to take to the streets, because the all-encompassing world of visual media brought the streets to your television screen.

Top photo: African American demonstrators outside the White House on March 12, 1965, with signs "We demand the right to vote, everywhere" and signs protesting police brutality against civil rights demonstrators in Selma, Alabama. Photo by Warren K. Leffler/U.S. News & World Report courtesy of the Library of Congress.

Tyler DesRoches, an assistant professor in the School of Sustainability and the School of Historical, Philosophical and Religious Studies at Arizona State University, was recently elected president of the International Network for Economic Method (INEM), the largest professional organization for philosophy and methodology of economics in the world.“Becoming president-elect of INEM is a great ho...

Tyler DesRoches, an assistant professor in the School of Sustainability and the School of Historical, Philosophical and Religious Studies at Arizona State University, was recently elected president of the International Network for Economic Method (INEM), the largest professional organization for philosophy and methodology of economics in the world.

“Becoming president-elect of INEM is a great honor,” DesRoches said. “I’m absolutely thrilled to begin working with the members, board and editors of the Journal of Economic Methodology — INEM’s journal, which is a top peer-reviewed journal among economic methodologists.” 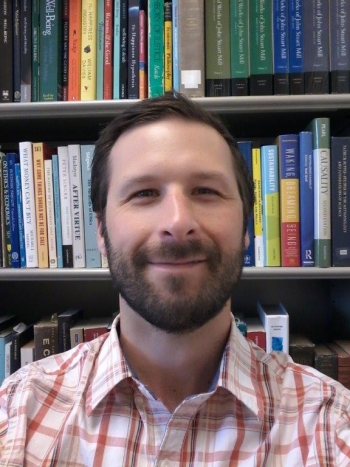 DesRoches said that the disciplines of philosophy and economics are intertwined, and many of the world’s most highly regarded economic theorists were “first and foremost philosophers."

"Today, philosophers of economics focus on many topics, including rational choice theory, causation, ethics and the nature of economic models,” he said.

“My own research has focused on the social-scientific approach to modeling sustainable development, human well-being in economics, the normative foundations of behavioral welfare economics, and the concept of ‘natural capital’ in ecological economics,” he said.

As president of INEM, DesRoches aims to “improve INEM’s constitution, grow the membership and host a top-notch conference at ASU during the fall of 2021.”

During the fall 2020 semester, DesRoches will be teaching a new undergraduate course titled “History and Philosophy of Science: Economics (from Aristotle to Thomas Robert Malthus)," and a graduate seminar, “Human Well-Being and Sustainability.”