The Virginia G. Piper Center for Creative Writing to present over 25 events showcasing indigenous arts and culture programming as part of NEA Big Read in spring 2021

The Virginia G. Piper CenterThe Virginia G. Piper Center for Creative Writing at Arizona State University is nonacademic university center dedicated to offering classes, talks, readings, workshops and other literary events and programs for the larger community. for Creative Writing at Arizona State University has been awarded a prestigious Big Read Grant from the National Endowment for the Arts (NEA) to present a month of talks, readings, book clubs and other dynamic events and programs around indigenous culture and the literary arts in spring 2021.

"For over 16 years, the Piper Center has been a catalyst for connecting area arts and culture organizations and serving communities through innovative, inspiring and accessible collaborative programs," said Alberto Ríos, inaugural Arizona Poet Laureate and center director. "With an extensive network of valued partners within Arizona State University and throughout the state, the Piper Center has the structure and community investments needed to deliver a deeply meaningful and transformative experience through the NEA Big Read." 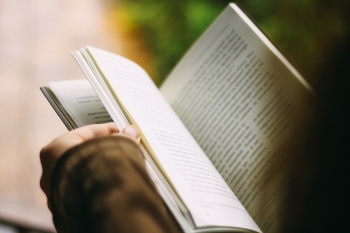 A page-turning masterpiece of literary fiction

The NEA Big ReadThe Virginia G. Piper Center for Creative Writing at Arizona State University is one of 78 not-for-profit organizations to receive a grant to host an NEA Big Read project between September 2019 and June 2020.: Phoenix is centered around "The Round House" by Louise Erdrich (Anishinaabe). Winner of the National Book Award in fiction for 2012, the novel is a classic coming-of age story blended with elements of memoir, detective novels and oral history that, according to the NEA, "tells the suspenseful tale of a 13-year-old boy's investigation and desire for revenge following a brutal attack on his mother that leaves his father, a tribal judge, helpless in his pursuit to bring the perpetrator to justice.”

Exploring justice, family and personal history through an indigenous lens, the Piper Center is organizing a dynamic and extensive lineup of interconnected performances, workshops and conversations with university partners and other organizations from the larger community.

For the keynote event, acclaimed poet Layli Long Soldier (Ogala Lakota) will develop and present new work commissioned by the grant in a reading and conversation moderated by poet, MacArthur Fellow and ASU Professor Natalie Diaz.

Long Soldier has a deep history of social activism and has received numerous recognitions and awards for her work, including a Lannan Literary Fellowship, a Whiting Award and a National Book Critics Circle award. Her debut collection, "Whereas," uses the language and occasion of President Obama's 2009 congressional apology to Native Americans to challenge, as described by Diaz, "the making and maintenance of an empire ... transforming the page to withstand the tension of an occupied body, country and, specifically, an occupied language." 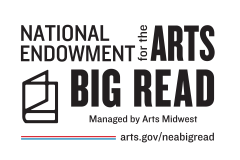 Over 25 panels, workshops and performances

Beyond the keynote, the NEA Big Read: Phoenix will feature a variety of programs spanning poetry, storytelling, library science, the humanities and more, including:

While many events focus on or are intended for indigenous individuals, all events are open to the public. With a few exceptions, the majority are free.

To share "The Round House" throughout the community, the Piper Center will be distributing over 750 books to the public for free. Community members will also be able to check out unlimited copies of the e-book for three months through the Phoenix Public Library.

Within "The Round House's" larger themes, the Piper Center will place a particular focus on the issues that form the central conflict of the novel: missing and murdered indigenous women and girls (MMIWG).

"Violence against Native women and girls exceeds that of any other group in the United States," said Traci Morris, who directs the American Indian Policy Institute at Arizona State University. "While Native women make up less than 2% of the national population, nearly 40% of all women involved in sex trafficking cases are indigenous."

Several efforts have taken steps to address this problem over the last year. The Arizona Legislature formed a local task force to study MMIWG through HB2570 in May 2019. A similar committee was established by an executive order from Donald Trump that November.

Unfortunately, a lack of reliable data and standardized collection practices among local, state, federal and tribal governments make it virtually impossible to assess the extent of the issue, let alone address it.

"Native women in Arizona disappear three times when they go missing: they disappear in real life, they disappear in the data and they disappear in the media," said state representative Jennifer Jermaine. "With HB2570 we are examining the systematic gaps in data collection and resource allocation from the state level. We are also partnering with tribal leaders and federal agencies to begin to solve communication and coordination problems that have complicated search, rescue and recovery efforts."

At the same time, statistics alone can't provide the political, social and historical context in which these crimes take place, nor can they capture the experiences of individuals, families and communities who are forced to live through it. Most importantly of all, these issues risk reducing their identities to that of mere victims, simplifying a rich and dynamic humanity.

Through this grant, the center aims to extend and deepen the discourse around indigenous perspectives, raise awareness and activism surrounding missing and murdered indigenous women and girls, and honor the lives and stories of Native American storytellers, artists and community members.

“With its NEA Big Read programs structured around the work of indigenous women and social justice, the Piper Center has once again demonstrated its commitment to embodying the mission of The College," said Jeffrey Cohen, dean of humanities at the College of Liberal Arts and Sciences at Arizona State University. "The future of the humanities is here.”

ASU researcher tests face mask efficiency before and after sterilization

Protective face masks are key to Arizona State University and other schools and organizations reopening because their use significantly decreases coronavirus spread. Some masks, in light of recent shortages, are being sterilized to allow reuse.Sterilization, however, may alter mask structure and therefore the effectiveness of the mask’s ability to block small droplets and aerosols. Airborne part...

ASU researcher tests face mask efficiency before and after sterilization

Protective face masks are key to Arizona State University and other schools and organizations reopening because their use significantly decreases coronavirus spread. Some masks, in light of recent shortages, are being sterilized to allow reuse.

Sterilization, however, may alter mask structure and therefore the effectiveness of the mask’s ability to block small droplets and aerosols. Airborne particles and droplets, from a few nanometers to a few microns in size, are the research focus of School of Molecular Sciences Professor Pierre Herckes. 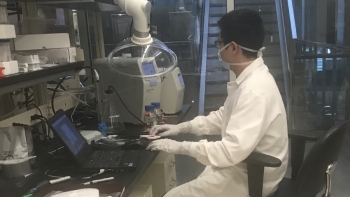 Herckes and his graduate student researcher, Zhaobo Zhang, were testing personal protective equipment (PPE) mask efficiency to trap nanoparticles in the semi-conductor industry prior to the COVID-19 outbreak. After the outbreak, they were approached by several groups to test mask efficiency before and after sterilization. Sterilization methods included treatment with ultraviolet (UV) light, ozone, or peroxide vapors. Before and after each of these sterilization methods, Herckes and Zhang tested the efficiency of masks to trap droplets and aerosols.

“What we found was there was not a significant decrease in mask efficiency before and after treatment," Herckes said. "However, further testing needs to be done to determine the effect of multiple treatments on the structure of mask materials.”

“This research is important because we know very little about how UV-light modifies the molecular structure of protective masks,” Herckes said. Their work will also allow them to determine mask efficiency based on particle size and charge.

Large droplets, such as those produced when someone coughs or sneezes, are trapped to a great degree by a mask, and these droplets don’t travel as far as smaller droplets. Smaller droplets, however, are also capable of carrying coronavirus particles. Coronavirus particles are also transmitted by smaller particles, such as those produced by talking or breathing. These small droplets stay in the air much longer than large droplets, and they are inhaled more deeply into your lungs.

“Wear a mask, because it not only protects you, but it protects others,” Herckes said.

Protection from a mask is greatest when it is worn properly.

“Wearing a mask below your nose allows you to inhale and exhale droplets, so cover your nose with the mask, and make sure it fits properly around your face so there isn’t leakage from the sides,” he said. If air goes around the mask, it’s not effectively trapping particles.

Herckes also advises that you minimize touching your mask once it’s on.

Washing your hands and wearing your mask are both important steps to staying healthy and reducing the spread of coronavirus.