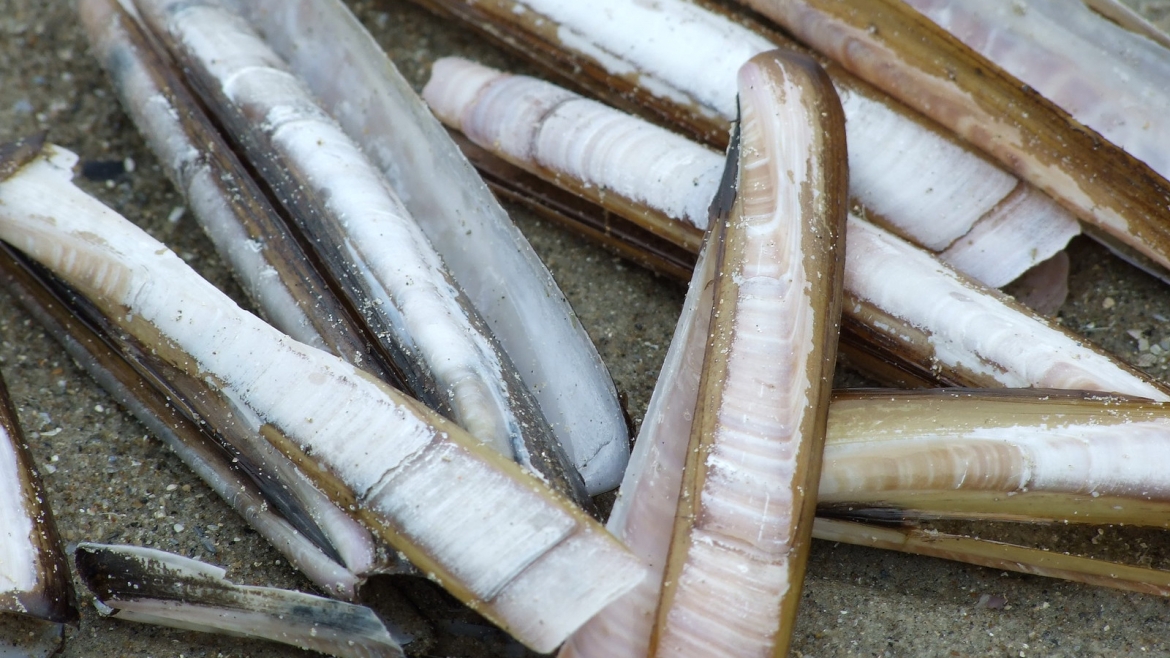 Clamming up (and down, and sideways)

As anyone who has ever used a shovel knows, the only way to dig is by using force. A bulldozer, an earthmover, a spade — they all involve force.

But many animals burrow because they live underground. And they don’t use force.

Enter the humble — but very effective — razor clam. Not one of nature’s loveliest creatures, except when it comes to digging, which they can do at a foot a minute. Pretty impressive, as any frustrated clam digger can tell you.

Tao is working on subsurface robots that move like razor clams. First, however, he has had to carefully study, measure and model how they do what they do. His most recent paper on the subject was recently published.

Tao became interested in bioinspired design while working on his PhD. His first project was a flow sensor inspired by fish. It piqued his background in geotechnical engineering.

“I was thinking, 'Is there any way I can combine these two ideas so I can learn from nature to improve the geotechnical practices?” he said.

He went to a robotics lecture at MIT where the lecturer talked about how animals burrow. Tao thought his geotechnical training could give him insights into burrowing.

His first paper — purely theoretical — used 50 year old data from biologists, looking at it from a geotechnical engineer’s perspective.

When a razor clam opens its shell, it increases the diameter. The surface area increases and the pressure increases. It extends its foot down, then pushes. Then it contracts, inflates its foot so it becomes an anchor, then pulls itself down.

“They are using one trick to do two functions,” Tao said. “They leverage the property of the soil to burrow.”

It works really well. They can dig about a foot a minute, depending on the texture of what they’re digging in.

But Tao wondered how they get back up after they’ve buried themselves. “They have to go up some way,” he said.

Turns out, those wily clams have a trick up their shell.

Tao and his team found out how it works by making a robot with a silicone tube surrounded by a sleeve of inextensible threads. By inflating and deflating the robot, it expanded and contracted, naturally pushing itself up.

“What this robot does is only push upwards and downwards,” Tao said.

As it climbs, the soil beneath it collapses and fills in the hole, giving the robot a new base on which to continue climbing.

“It’s much faster when it goes up,” he said.

Tao dug two razor clams from the beach in Rhode Island and brought them back to his lab in Arizona.

“When they go down, they have a very complex sequence of motion,” he said.

And it all only works in burrowing in granular material. It’s a spectacular display of evolution.

Tao and his team have published both a technical abstract showing the robot can do what a clam can do and a paper in the journal Bioinspiration and Biomimetics.

The robot is a fiber-reinforced silicon tube.  They tested it in different types of soil, and with water added.

“Now we have a robot that can move,” he said.

Tao envisions robots like earthworms, which can move up, down, sideways, and at various angles. “This is our ultimate goal – to have maybe tens or hundreds of these small robots which carry sensors, power and communicating units. They can dig in different directions and measure things.”

COVID-19 has pushed higher education faculty everywhere to learn what it means to educate students at a distance. To help faculty and administrators better understand the pedagogy and best practices of online and remote learning, Arizona State University is hosting "REMOTE: The Connected Faculty Summit," a free virtual event designed for all faculty preparing courses for fall 2020.The summit, to... 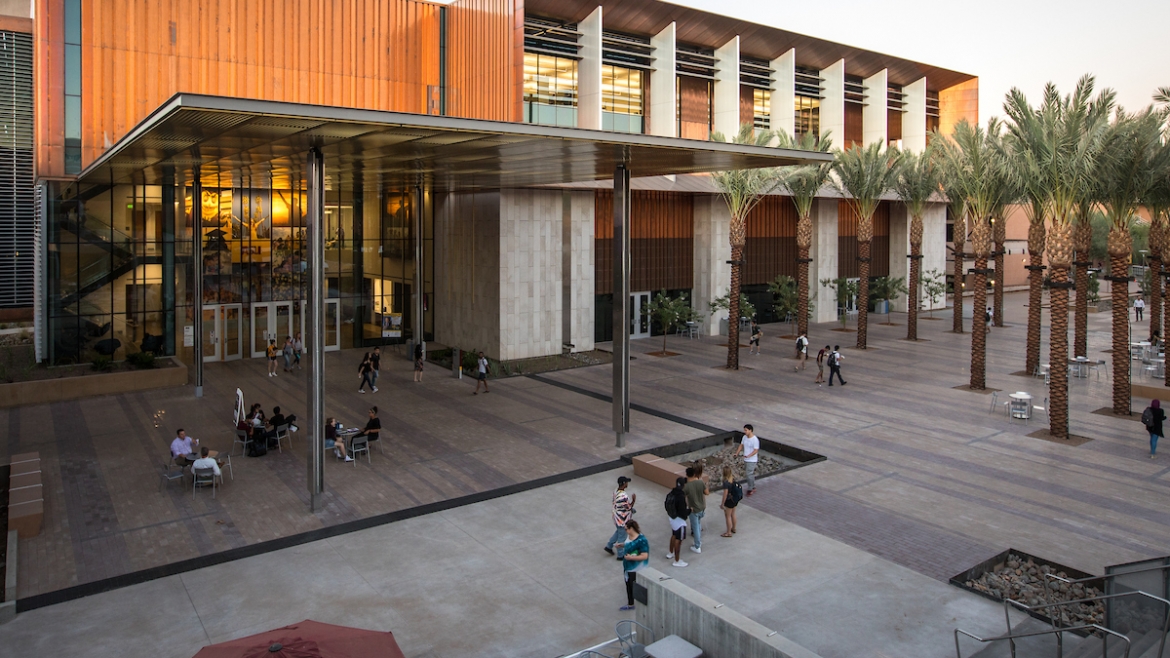 COVID-19 has pushed higher education faculty everywhere to learn what it means to educate students at a distance. To help faculty and administrators better understand the pedagogy and best practices of online and remote learning, Arizona State University is hosting "REMOTE: The Connected Faculty Summit," a free virtual event designed for all faculty preparing courses for fall 2020.

The summit, to be held July 13-14, will provide a forum and support for all colleagues across higher education and help them design the most effective and engaging experiences for learners. Leading educators with extensive practical online and blended teaching and learning experience drawn from across global universities and colleges are being gathered to present immediately useful and evidence-backed practices on both subject-specific and general online teaching techniques.

Over 60 half-hour sessions selected by a group of nationally respected higher education experts will be presented at the summit. There will be two broad categories of presentation — “Disciplines” and “Topics” — all led by faculty members and master practitioners drawn from institutions across the country. The Disciplines sessions are led by faculty who are currently running large successful online courses, and they will share their perspectives on best practices, pedagogy, techniques and tools to provide actionable insights around teaching their discipline to colleagues preparing courses for fall 2020. The Topics sessions will offer intelligence and tips to support all disciplines, and specific issues addressed will include diversity and inclusion in the online classroom, effective assessment, mixed-mode teaching and techniques to promote student engagement and well-being. 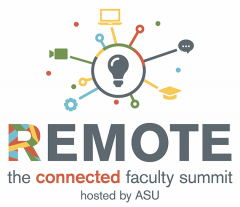 The summit will also provide a further eight sessions on pressing policy issues for U.S. and international higher educational institutions for university leadership, presidents, provosts, deans, department chairs and senior administrators who are leading their institutions through uniquely complex and challenging dynamics. These will be led by higher education leaders currently grappling with the situation.

“During this unprecedented time, the fall semester promises to be complex and unusually challenging for educators and administrators,” Crow said. “With technology redefining learning, we are convening REMOTE: The Connected Faculty Summit to bring together the best of online teaching nationwide and help higher education faculty discover immediate ways to improve online class delivery and to obtain navigation assistance around blended delivery. This is particularly a time when we in higher education need to collaborate and advance creative responses for teaching and learning.”

“Faculty are preparing for the coming year in an environment of uncertainty,” added David Levin, university entrepreneur in residence at ASU and executive producer of REMOTE. “Student needs in this new world are going to be different and courses are going to be hybrid — combining various online and face-to-face elements. We’re excited to offer two days of vital information, networking and interaction that will provide faculty with insights on how to make the most of online and blended teaching.”

REMOTE: The Connected Faculty Summit is free of charge for faculty and learning practitioners as well as administrators. Attendees can gain best practices through recorded sessions from the summit through the end of 2020.