Diamond, a cutting material hard enough to get through almost anything, has long been cherished as a gemstone and a symbol of endurance. Decades ago, scientists also predicted another use: that it could be used to make semiconductor-based electronic components that could handle larger electrical power in less space, and with less cooling than traditional components. 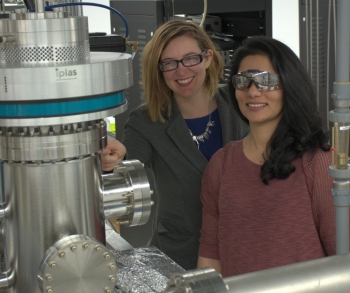 The theoretical performance of diamond electronics for power-intense applications (such as grid-scale electronics and fast charging) was calculated to be orders of magnitude better than other materials. However, even decades after these calculations were performed, diamond-power electronics had not yet entered the commercial market because there was one aspect of making them that eluded scientists: being able to intentionally add elements other than carbon into the structure of diamond.

It doesn’t take many of these impurities to transform the way electrons behave in diamond: Replacing only about 1 in 100,000 carbon atoms with another element enables electronics applications. Then, a breakthrough happened 10 years ago in ASU Professor Robert Nemanich's lab.

A new technique was discovered that could bring diamond’s promise for electronics out of the theoretical and into the world. The technique is based on using plasma (an extremely hot gas) to grow diamond with a mix of carbon and controlled phosphorous impurities.

“This technology is revolutionary. Although we have known for decades that diamond is theoretically great for these applications, we now have the ability to realize its promise,” said Anna Zaniewksi, chief technology officer of Advent Diamond, Inc.

The idea was patented by ASU and provided a path to realize the promise of diamond electronics. Advent Diamond was started as a way to spin out this technology and bring the benefits of diamond electronics to society. The company and ASU's unique capability to grow intentionally impure diamond with phosphorous is a capability not shared by any other lab in the United States.

Led by Zaniewski, CEO Manpuneet Benipal and Nemanich, who serves as technical adviser, Advent Diamond started developing both power electronics and diamond-based detectors. They became successful in winning small business innovation research awards totaling $700,000 in the last two and a half years from various government agencies. These were mostly Phase I grants, which fund short-term projects to conduct feasibility studies on a variety of products.

One of these studies, funded by the National Science Foundation, resulted in proof that diamond-power electronics are feasible not just in the laboratory, but also have commercial promise. Advent Diamond submitted an application for a Phase II grant for $750,000 over two years to bring a foundational power electronic component, a diode, to market. That grant was funded last week.

“(The) Advent Diamond team is committed to bringing this revolutionary technology to market. The NSF funding will accelerate the commercialization of our next generation high-power diamond devices,” Benipal said.

Members of the ASU team work together on the design in the studio. Photo courtesy Chingwen Cheng. Download Full Image

Beginning with a series of community engagement workshops, Ready! Set! Activate! envisions the use of green infrastructure at Paideia to create resilient natural learning and play landscapes that promote health equity by improving the quality and access to green space for the student community.

Because south Phoenix is located on an alluvial floodplain of South Mountain, green infrastructure interventions, including the creation of bioswales and bioretention for stormwater, along with the use of native vegetation, are critical to mitigate seasonal flooding and improve environmental site conditions.

“This project allowed for collaboration between a charter school serving minority and economically underserved children and ASU researchers and students to address environmental justice and equity in health and education,” Cheng said. “Our students gained firsthand experience working with the community and seeing that their design concepts would be realized in the near future. This is an invaluable service-learning experience for students and directly benefits underserved communities.”

The team will receive a $2,500 student prize and a $2,500 faculty prize. Designs were completed and submitted to the EPA last fall for review and consideration.