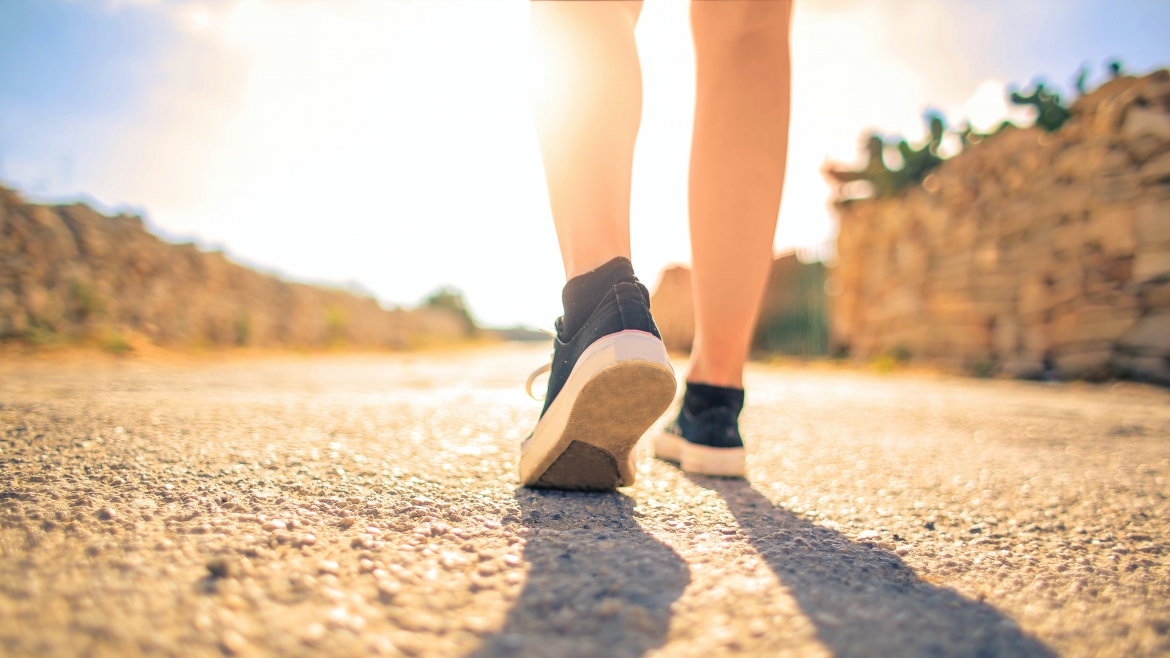 If you’ve ever spent a winter in Maine or Minnesota, you know you need special clothing — parkas, mittens, long johns — to survive. If it’s cold enough outside, a human can die in less than an hour, depending on conditions and the type of exposure.

On the flip side of that coin, unprotected and exposed humans can die in three to six hours in the dead of summer in the desert Southwest. But there really isn’t any clothing designed for that extreme. You either take a lot off and hunker down in the shade or wear loose-fitting shirts and pants.

Now, Arizona State University engineer Konrad Rykaczewski has created a design for a cooling vest to keep wearers comfortable in scorching conditions. His paper on the design was published this month.

A third of the world’s population lives in areas that will be as hot as the hottest parts of the Sahara within 50 years, according to a recent study. Phoenix is getting hotter, at least at night. The average number of hot days has gone up a little bit, but lows have rocketed in the past four decades.

“This is substantial, and this is real,” said Rykaczewski, an assistant professor at the School for the Engineering of Matter, Transport and Energy at ASU.

Rykaczewski is a thermal dynamics engineer who is working on various designs and materials to wear in hot temperatures. “Cool future fashion,” he calls it.

A mountain biker and father, he hits the trails at 4:30 a.m. on summer mornings.

“Sometimes that’s not enough,” he said. “It’s becoming challenging. … Anything over a daily low of 95, it’s going to be impossible to do anything outside. When the sun is up, it’s going to heat up even more quickly.”

By the time his kids wake up, it’s already 100 degrees Fahrenheit. The only things he can do with them involve the sprinkler or the swimming pool.

That inspired his latest idea. Through evaporation, it’s possible to be really cold in the dead of summer. Climb out of the pool in full sun on a July afternoon and a chill will sweep your body. While it may be as hot as a preheated oven, Arizona is blessed with low humidity — making evaporative cooling a good option.

There are cooling vests on the market, but they need to be soaked and resoaked while worn. They’re made of super-absorbing polymers — diaper material — which can absorb 100 times their own mass of water.

The problem is evaporation at the surface of material. The water just flies away.

“You can think of having this hydrated swollen polymer with water against your skin,” Rykaczewski said. “At the surface of the vest you have evaporation. You have some heat that goes into it from the body.”

On the outside, you have Phoenix summer heat. The vest is cooler than the outside. Materials have to reflect solar radiation and infrared. 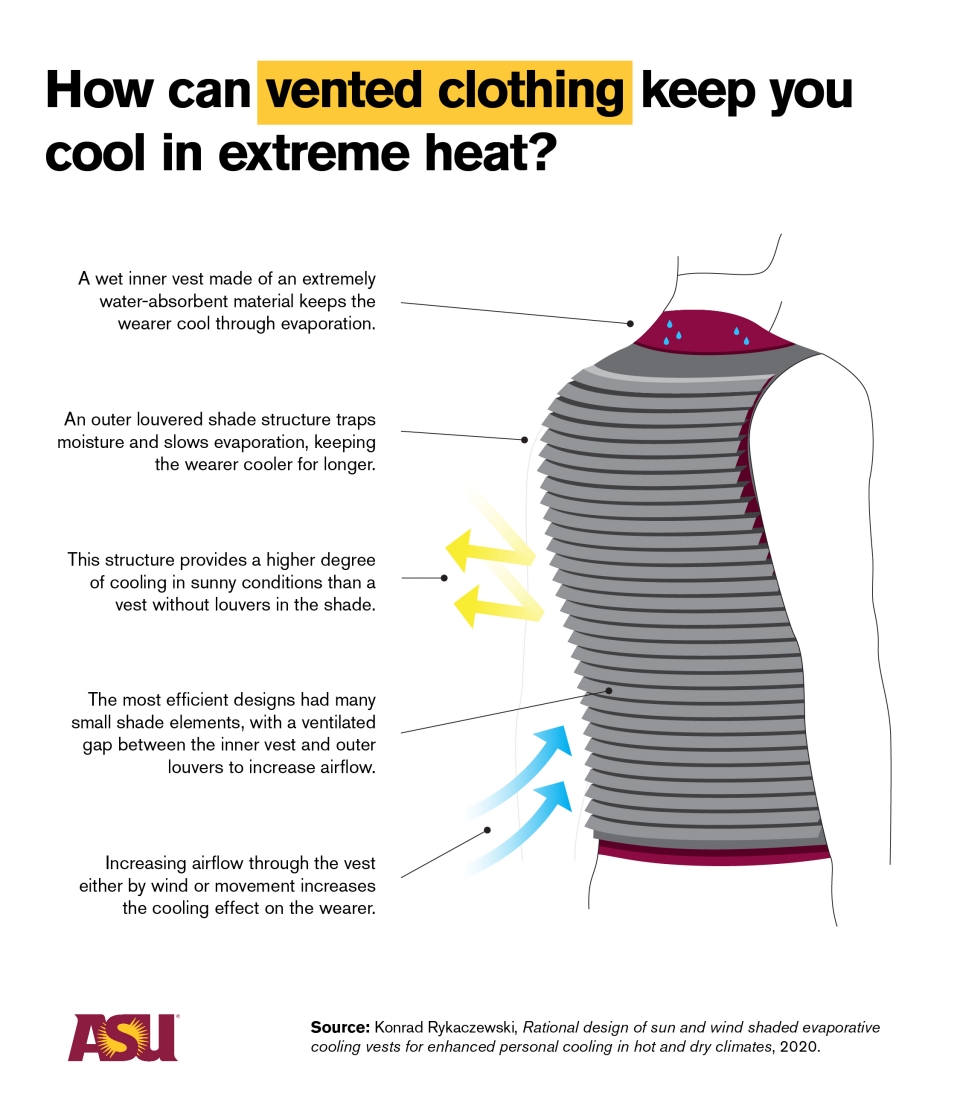 Rykaczewski quantified it in terms of heat flux: the amount of heat you can pull out per unit area. On an average human, that’s 1.8 to 2 square meters of surface area.

He plotted heat flux — body cooling and body heating — for standing in the shade and in the sun.

“If you are in sunny conditions and there’s not much air movement, you’re evaporating a fair amount of water, but you’re getting heated,” he said.

You end up getting heated in the sun even though you’re wearing an evaporative vest. Because of the sun, you’re getting double the heat you’re producing with your body. You need to get a fair amount of breeze going over you to feel any cooling effects (and you’re still losing water.)

“You’re getting less heated than you would be without the vest, but it defeats the purpose,” he said. Eighty to 90% of the water you are wearing is wasted. If you “wear” a pound of water, only (roughly) 10% is cooling you.

So, too much convection is bad and too much exposure is bad.

“The obvious answer is you need to wear some kind of a shade over that,” Rykaczewski said. “The crazy people who wear aluminum hats so aliens and the government doesn’t listen in on them? That’s actually the way to go. It’s better than a white T-shirt.”

There are products with metallized low-polymer forms, such as space blankets. In Phoenix, these would be useful to cool you because you’re not losing any heat to the environment.

Rykaczewski’s solution combines the two conceptd: an evaporative vest on the bottom and a foil vest on top to thwart radiation. “But still you obviously need a little bit of air flow and access in order to have the evaporation actually happen,” he said.

In order to maximize the amount of heat being removed, you need a gap between the surface of the vest and the shade.

“Of all the simulations I did, that was the most important,” he said. “You need that gap.”

But the gap can’t be too big, otherwise you lose moisture, especially if it’s windy. Rykaczewski thought of louvers. “You reduce the amount of water that evaporates from it, and waste,” he said.

“The whole point is to get most of the water in the vest to cooling you. …The point is for it to last an hour, hour and a half, so you can get something done outside and be reasonably comfortable.”

The design is not intended for running a marathon in August. He envisions it for going for a walk, doing yard work or playing with the kids.

Rykaczewski plans on a few more years of testing and making mockups before venturing into the commercial realm.

Remote working could shift how employees identify with companies

The COVID-19 pandemic has forced many employees out of the office into their homes. A recent Gallup poll shows that 62% of employed Americans report having worked from home during the crisis, twice as many as in mid-March.But the key is that workers now have no choice in the matter, according to Blake Ashforth, who holds the Horace Steele Arizona Heritage Chair in the Management and Entrepreneursh... 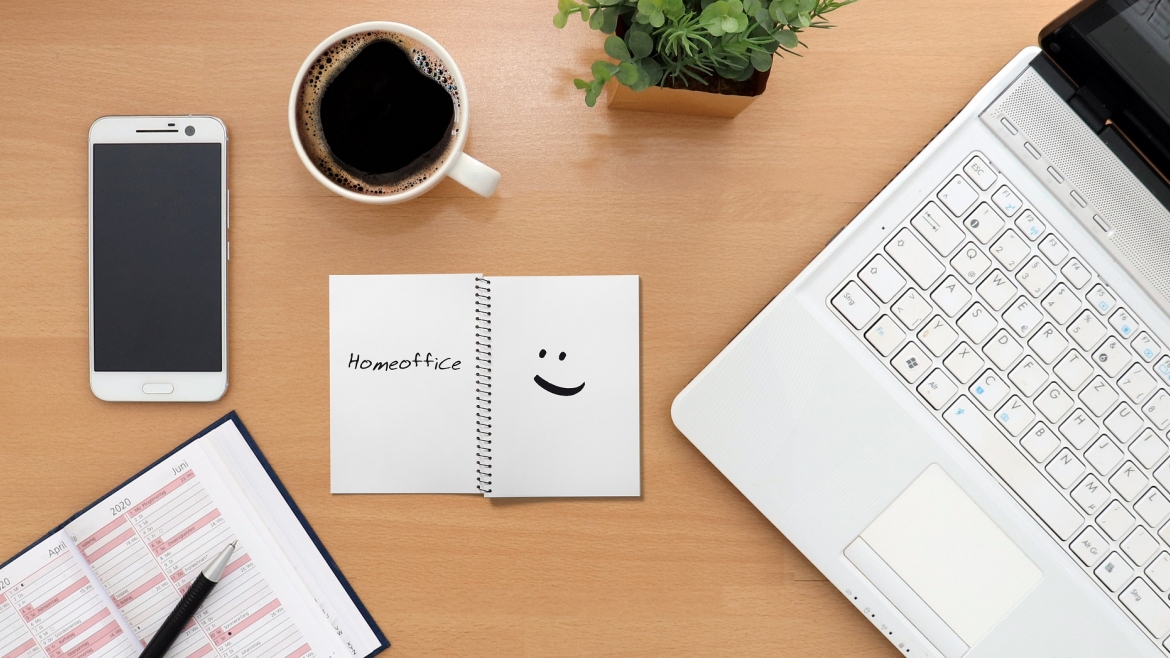 Remote working could shift how employees identify with companies

Clicking with co-workers is key to working remotely, ASU professor's study finds
May 21, 2020

The COVID-19 pandemic has forced many employees out of the office into their homes. A recent Gallup poll shows that 62% of employed Americans report having worked from home during the crisis, twice as many as in mid-March.

But the key is that workers now have no choice in the matter, according to Blake Ashforth, who holds the Horace Steele Arizona Heritage Chair in the Management and Entrepreneurship Department of the W. P. Carey School of Business at Arizona State University. Ashforth studies how people identify with organizations, which has produced studies on topics such as stigmatized jobs and bullying in the workplace.

“In pre-COVID times, working remotely worked pretty well because there was self-selection going on,” he said. “When people self-select to work at home, they have the resources to make a go of it, and they can create a home environment to block out those distractions.

“COVID times are different. You’re in a situation where you don’t have a choice and people are scrambling to figure out how to make this possible.”

Last fall, Ashforth published a study in the Academy of Management journal about how workers who rarely see each other face-to-face form relationships. He and his co-authors found that a key to bonding with remote colleagues is “cadence,” defined as being able to predict how co-workers interact, and that managers should set aside personal time during conference calls for workers to have some fun.

Ashforth answered some questions from ASU Now about the new way of working. 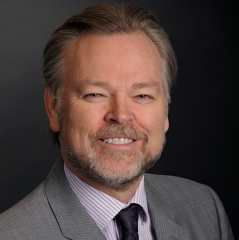 Answer: The key things that need to be there are, first of all, an ability to create boundaries, temporal and spatial. You need to able to carve out a hunk of the day to say, "This is what I’m going to do."

It’s hard to work with kids at home but you want to carve out time where you will be primarily focused on either work or home.

The other part is spatial — "This is where you do your work that’s efficient."

Question: What else is different about working at home compared to the office?

Now, some people get dressed for work even though they don’t need to look like they’re at the office, just so they’re getting into work mode.

Question: What did your research on teams that work remotely discover?

Answer: It was with technology workers who work primarily on the road and in teams. How do you pull that off and create relationships with very little face-to-face contact?

We found that people were able to personalize their relationships, and have, if not a full-on friendship, at least a sense of friendliness. They were more efficient team members and felt better about being on a team.

We think of home and work as separate and friendships as different from officemates. People who were able to blend the two were able to get things done — get immediate responses, get the benefit of the doubt if problems arose and have people vouch for them.

Q: How did they do that?

A: This division was almost entirely remote. They would meet periodically, but there was no ongoing face-to-face communication. And no videoconferencing. Everything was by text, emails and instant messaging. The company wanted the visual privacy and asynchronicity of IM, where people can take time to respond.

Q: So how do you become friends in a world that’s all textual?

A: It was little things they did, asking, "Where do you live?" Or someone might tell a little off-color joke, and if it fell flat, back off.

The most efficient leaders were the ones who implicitly recognized this and created a moment for these interactions. In (phone) meetings, they would give five minutes for something unrelated to work, like the song of the day. They personalized relationships so when the meeting began, it wasn’t anonymous.

Q: What areas of research do you see in the future for this time?

A: There are certainly identity implications in this. What does this do for your affinity for the organization? When you work at a location like ASU, the campus provides a strong cue and that feeds our identity as an "ASU person.” When we’re working remotely, those cues are gone.

Already, pre-COVID, people were moving away from organizational identity and more toward occupational and network identity. This will hugely speed that up. People will be less inclined to invest in their organization.