Embedded in the community: Outstanding physics student is a third-generation ASU student

Weighing the pros and cons, considering multiple variables, and a little bit of faith all roll into deciding where to pursue higher education. Fortunately for Department of Physics graduate Tanner Wolfram, the choice was simple. 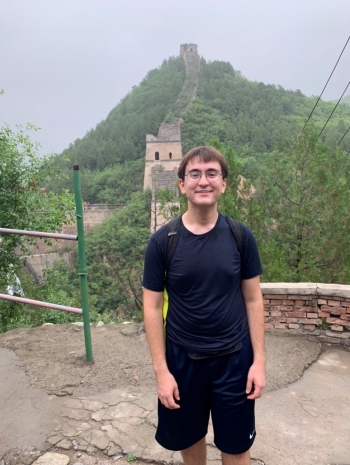 An award-winning and published student, Wolfram is part of the third generation in his family to graduate from Arizona State University.

“My family came to ASU forever,” Wolfram said. “My grandmother came here when I think it was still called Arizona State College. … My mom went here, all of her sisters, my dad, and I think one of his siblings.”

With such a rich history in his own family, Wolfram has had a front-row seat on ASU's evolution through decades of family stories.

“My grandmother talks about how the original Palm Walk used to be different; she called it a ‘small’ school,” he said.

Patricia Reagan, Wolfram’s maternal grandmother, attended Arizona State College in 1953, before the 1958 vote to change the school name to the one we are used to today. And, in the past 60 years, that “small school” has sky-rocketed to a sprawling, innovative New American University – with nearly 120,000 students spread across four campuses and several locations.

“That’s one of the coolest things for me to see, maybe, being here just a little longer than a lot of students,” said Wolfram. “I got to see so many new buildings and so many new research areas develop here at ASU. To hear about them through emails, and things from the campus, and just to hear about all the progressions ASU is making, that’s pretty cool."

Through family involvement in campus activities over the years, Wolfram saw the Tempe campus shift and evolve through his parents' eyes, listening to their stories and commentary on changes and new elements. Both his parents graduated from ASU in 1984.

When asked which changes seemed most remarkable, Wolfram’s father, Scott Wolfram, said, “The addition of the whole science complex with Biodesign, the School of Earth and Space Exploration and then the addition of Barrett.”

“I think the new architectural designs are really beautiful. I also love the plant life that accents the campus,” said Wolfram’s mother, Deborah Estrada. “I’m also really pleased that there are many places for the students to eat and hang out.”

Wolfram’s earliest memory of ASU is of walking around the Tempe campus with his mother, who brought him to see the sights and also to participate in various campus activities for children, from bowling to violin lessons.

“My mom says that the first thing I did at ASU was be part of the psychology child study lab. Obviously, I don’t remember this, since I was something like 3 or 4,” he said.

Wolfram remembers spending plenty of time in the Bateman Physical Sciences Center during events like ASU’s Open Door, and Earth and Space Exploration Day. Fitting, then, that this is the building where he would spend so much time as a physics student.

Wolfram enjoys a broad range of interests and passions and loves to learn. In addition to school and community activities, both at ASU and otherwise, he grew up watching the Science Channel. As time went on and people started asking him what he wanted to do after graduation, he noticed a definite pattern in his favorite shows — programs like Neil deGrasse Tyson's "Star Talk" and "How the Universe Works" heavily featured expert guests to explore varying topics.

He started as an astrophysics major, but soon switched to physics, not wanting to specialize too early.

“I think that is the key, I really wanted a big foundation in physics,” he said.

This foundation would help keep his options open and give him the freedom to explore his varied interests without the pressure of locking into a lifelong career path.

Wolfram likes options and has many interests besides his love of physics. In addition to his physics coursework, he enjoyed a wide range of extracurricular activities and completed two foreign language minors, Spanish and Chinese, and participated in a study abroad program in China.

He is very interested in politics, language, learning about new cultures and international relations. His many travel opportunities during his undergraduate years gave him insight, perspective and new experiences that he can’t wait to take with him into whatever life holds in store next.

Building his solid foundation in physics, Wolfram also found new interests in his major. One of his favorite subjects, and perhaps his proudest accomplishment, was completing the full undergraduate quantum coursework — including acing the notoriously difficult Quantum Physics III.

“That one I worked really hard for,” he said. “It was a hard class. It was a really hard class. The tests are very challenging; it’s very demanding. I’m glad in the end that I had done enough to get the A.”

Despite the level of difficulty, or perhaps because of it, Wolfram found he quite enjoyed abstract and theoretical topics.

“I’ve always liked things that are a little abstract, a little not-so-here, not so physical,” he said. Problems and questions often stayed on his mind for weeks afterward.

“I think I like the thinking side of it,” he said. “Just kind of sit with myself and ponder. You know, probably those were my favorite classes.”

He also appreciated the close friendships formed with his classmates, as they all took on such challenging courses together.

“I have to say, I really like the department here, that’s a really big thing,” said Wolfram.

“It was a lot of fun because we would all be in the same classes. You know, we worked together, we generally studied together, so that was always fun, and kept things very interesting — learning things with them and from them. That was one of the things I really liked about ASU.”

Wolfram is currently considering graduate programs. Is there a chance he will end up moving into astrophysics, the topic that launched his undergraduate journey? Perhaps. He certainly hasn’t lost his curiosity about the universe.

When asked what project he would tackle if suddenly gifted $40 million, he said he would devote it to furthering space exploration.

“My personal viewpoint is that we have a lot of time (hopefully) here on Earth, but I think we should also spend part of that time trying to explore farther out, try to make new worlds, and new things,” he said.

“That’s probably way far in the distant future,” he said. “But if that’s something I could have helped work on, getting people to different worlds — even if I only contributed a little, minor thing — that would be interesting.”

Imagine two children, Lucas and Gabby. They are both 4 years old and come from bilingual households. Lucas’ parents read to him every night. They talk about the books they read together often. Gabby’s dad is a single parent who works two jobs. He’s tired by the time he gets home, so he doesn’t have time to read to Gabby often. By the time Lucas and Gabby start school, Lucas will have hear... 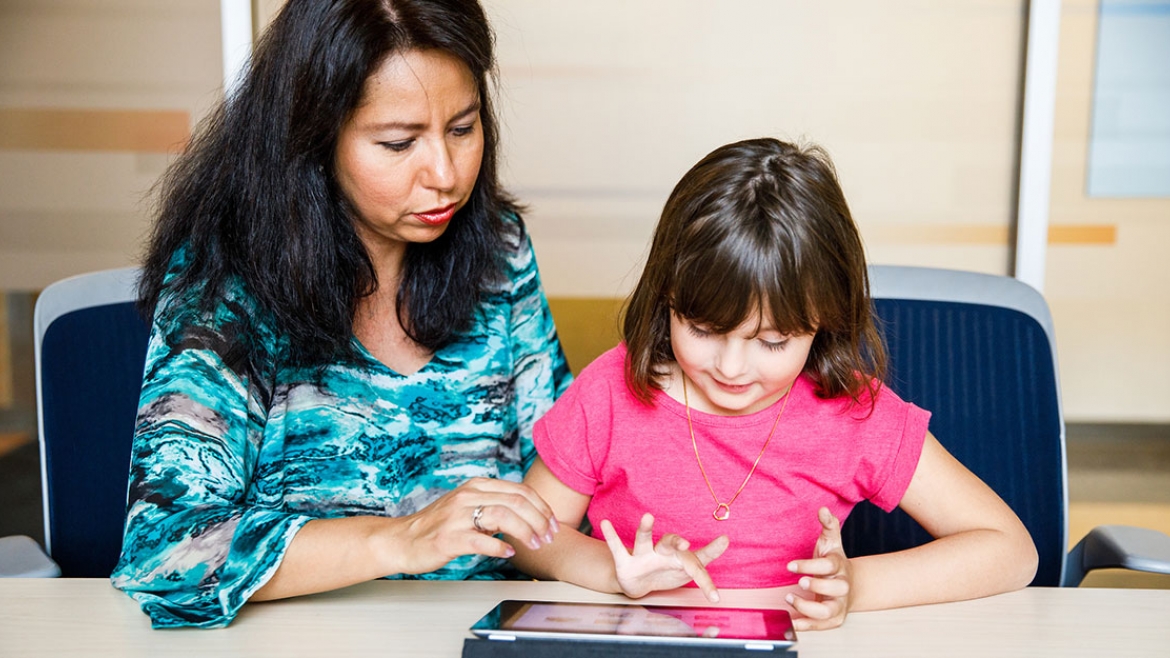 In pilot studies, EMBRACE app has been shown to double reading comprehension levels

Imagine two children, Lucas and Gabby. They are both 4 years old and come from bilingual households. Lucas’ parents read to him every night. They talk about the books they read together often. Gabby’s dad is a single parent who works two jobs. He’s tired by the time he gets home, so he doesn’t have time to read to Gabby often.

By the time Lucas and Gabby start school, Lucas will have heard over a million more words than Gabby. Due to this, Gabby is more likely to struggle with reading comprehension and is at a higher risk of being misidentified with a learning disability.

The app was created by Arthur Glenberg, a professor in ASU’s Department of Psychology; M. Adelaida Restrepo, a professor of speech and hearing science in ASU’s College of Health Solutions; and Erin Walker, an associate professor at the University of Pittsburgh’s School of Computing and Information.

Children read stories in both English and Spanish on the EMBRACE app and perform the actions in the story digitally. For example, for a sentence reading, “He brushed the cat’s fur to make it clean and soft,” the child would drag a picture of the character to the brush and then to the cat to demonstrate the action in the story.

The app is based on the theory of embodied cognition. The theory suggests that we match experiences from our bodies to words that we read and hear. We understand language by matching it to perception, action and emotional experiences.

Glenberg was one of the first researchers working on embodied cognition in the mid-1990s. He wanted to use the way our bodies help us comprehend language to help kids increase their reading comprehension.

He began with toys and simple stories. He would have some kids act out sentences in a story with the toys and some simply read the story. When children can imagine what they read, it activates multiple systems in their brains and allows for deeper understanding, according to Glenberg.

EMBRACE mirrors this process in an app format. When children read about brushing a cat’s fur and then use the app to act it out, they retain and understand the story more fully.

The EMBRACE app includes an intelligent tutoring system that tracks the success the child has following the directions with each story. For example, if the child makes a mistake reading a word, that word is added to the vocabulary list for additional practice.

“By developing an app around embodied cognition, we can understand in a new way how moving and reading are related,” Walker said. “We can adapt in real time to give (parents and students) the support they need. This opens up an area of intelligent tutoring that hasn’t been explored before.” 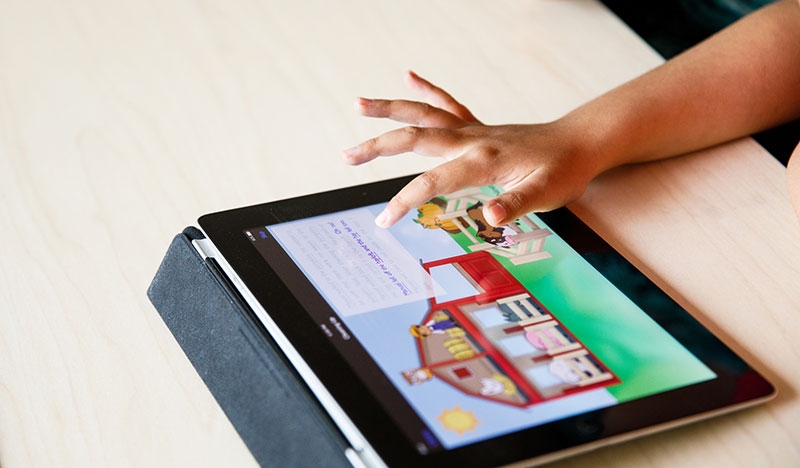 Child uses EMBRACE app on iPad to digitally act out a story. Photo by Andy DeLisle/ASU

EMBRACE is a tablet-based app that does not require an internet connection. However, the team is looking to create an online version to make it more widely available. The team is also working to adapt EMBRACE to encourage parents and children to read together, through funding from a National Science Foundation grant.

The newest version of EMBRACE will prompt parents to stop and ask questions and begin conversations while reading.

“These conversations improve oral language, improve vocabulary and increase the use of sophisticated syntax, and all of that improves reading comprehension,” Restrepo said.

The app is still in the research and development stage, but parents, teachers and students can still use the concepts behind it. Reading to children at home is valuable, regardless of language. If parents are more comfortable reading to their children in Spanish, they absolutely should still do that, according to Restrepo.

Another way to help kids improve reading comprehension is by asking questions during and after the story to determine if they have questions, to connect the material to their experiences, and to get them to articulate understanding in different parts of the story.

Once widely available, EMBRACEEMBRACE is partially supported with funding from the National Science Foundation., and the concepts it teaches, could help students like Gabby be more prepared to start school and increase levels of reading comprehension at a faster rate.