Coffee and college seem to be a perfect match.

Nearly 700 Starbucks partners are graduating from Arizona State University in May 2020. Including these talented students, that makes nearly 4,500 total Starbucks partners who have earned their bachelor’s degree from ASU since the Starbucks College Achievement Plan was announced in 2014.

The program is a first-of-its-kind partnership that creates an opportunity for all eligible Starbucks employees, or partners, to earn one of more than 80 undergraduate degrees through ASU Online with full tuition coverage.

To celebrate with this year's new graduates, ASU Now talked to a handful of current Starbucks College Achievement Plan students to get a sense of what the program means to them and their futures.

Being diagnosed with cancer is always alarming and too often, grim. An ancient disease, cancer is still with us, though treatment options remain limited, painful and frequently unsuccessful. What if we could treat cancer the same way we do other leading killers, like smallpox? What if we could prevent it — or even treat it — with a vaccine?There is a lot about cancer we don’t yet understand...

Being diagnosed with cancer is always alarming and too often, grim. An ancient disease, cancer is still with us, though treatment options remain limited, painful and frequently unsuccessful. What if we could treat cancer the same way we do other leading killers, like smallpox? What if we could prevent it — or even treat it — with a vaccine?

There is a lot about cancer we don’t yet understand, but we do understand the complexities associated with treating it. Cancer defies the normal standards of a healthy cell, such as maintaining sustainable replication and the even distribution of nutrients. Instead, cancer cells replicate uncontrollably, hijacking the environment they inhabit, and are characterized by an extremely high mutation rate. 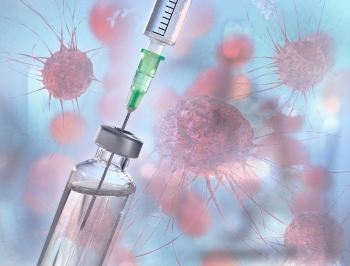 In a new study appearing in the journal BMC Immunology, lead researcher Milene Peterson along with a team of researchers including Stephen Johnston, all in the Biodesign Center for Innovations in Medicine, took a look at the efficacy of personal vaccines versus shared vaccines, which target mutations shared by the majority of individuals with a cancer subtype. Download Full Image

Targeting cancer mutations with a vaccine is particularly vexing, as most are unique to each individual. But researchers at the Biodesign Institute may have a solution to these challenges.

In a new study appearing in the journal BMC Immunology, lead researcher Milene Peterson along with a team of researchers including Stephen Johnston, all in Arizona State University's Biodesign Center for Innovations in Medicine, took a look at the efficacy of personal vaccines versus shared vaccines, which target mutations shared by the majority of individuals with a cancer subtype.

“There were about 30 years where people were trying to make cancer vaccines, but these efforts were a total failure,” said Johnston, director of the Biodesign Center for Innovations in Medicine. “More recently, there was the realization that they were using the wrong material in those vaccines, and what was really happening was that the immune system was engaging with all those mutations occurring in the tumor.”

A more targeted approach to the problem was needed, so researchers started taking samples from tumors and sequencing them to identify potential mutations that could activate the immune system.

“The problem was when they started sequencing these tumors, they found that all those mutations in the DNA were personal. Everybody’s tumor had different mutations in it — I am sure you’ve probably heard that cancer is personal. And at the DNA-level, that is clearly the case,” Johnston added.

Despite this limitation, various pharmaceutical companies have pursued this vaccine strategy. In the ongoing clinical trials, patients are having their tumors sampled and sequenced to find DNA mutations unique to their cancer. Upon identifying these, clinical researchers create personal vaccines to generate an immune response and stifle the growth of the tumor, for that individual alone.

But this brings up another important point — by the time a tumor is big enough to generate a large enough sample for sequencing, the cancer is already late-stage. And as one can imagine, the resources needed to carry out such sequencing for each cancer patient racks up a formidable cost.

“It takes about one to three months to make that personal vaccine. And it is expensive — it is probably going to cost about $100,000 dollars for each person to make that vaccine. It’s an exciting new idea, but it has its difficulties,” Johnston said.

To mediate this challenge, Biodesign researchers sought an alternative vaccine strategy, one where they could utilize mutations that arise in the majority of individuals with a given cancer. Researchers found that most of the mutations seen in DNA were personal and did not activate the immune system to the extent they needed, so they turned to RNA instead.

“Most of the mutations that occur in the DNA result in single amino acid changes, so most of those will not elicit an immune response,” Johnston said. “The mutations, or the variance that we find in RNA, they tended to be fairly long tracks of mutant peptides.”

Johnston went on to liken these mutant peptides to that of a pathogen, suggesting they would have a stronger impact on immune activation. Not only were these mutations more likely to trigger immune action, but many of them were conserved between individuals with a cancer subtype. This has strong implications for a broadly applicable vaccine.

“For example, we can find RNA mutations that 70% of women with breast cancer have in their tumor. That gave us the idea that we can make an off-the-shelf, premade vaccine by just putting enough of the frequent mutations together.”

Utilizing these shared mutations, or RNA frameshift mutations, the researchers made what they called a FAST shared cancer vaccine. They tested this out in a mouse model with breast cancer and compared its performance to that of the personal vaccine. This would naturally be less expensive, but how effective would it be?

The results were highly encouraging. When researchers tested the shared vaccine in the breast cancer mouse model, they found that it was just as effective as the personal vaccine.

“Our results clearly proved that the frameshifts are potent antigens and that both vaccine strategies were successful and have comparable anticancer efficacy,” Peterson said.

This is a testament to the viability of this vaccine as a more cost-effective alternative.

“When patients are diagnosed, we could give them a premade vaccine that is 1,000 times less expensive and much simpler to make,” Johnston said.

The opportunities born from these discoveries are boundless — in addition to lowering cost and lessening the resources needed to develop the vaccine while providing a similar effect postdiagnosis, the shared vaccine may also be used as a preventative measure.

Once we understand what mutations arise in a subtype of cancer, we can prep the immune system to react were that cancer to develop, using the same vaccine.

Oftentimes in research, there is a demand for the most effective, state-of-the art treatment, but on a global scale, that is not always a feasible route. With this study, the researchers took the state of public health into consideration.

“Everything we have done both on the diagnostic side and the vaccine side, we have designed with the idea that it will be inexpensive. Our rationale is that 70% of the cancer in the world doesn’t develop in developed countries. They will never be able to afford a $100,000 course of therapy for each individual.”