Suren Jayasuriya, an Arizona State University professor jointly appointed with the School of Arts, Media and Engineering and the School of Electrical, Computer and Energy Engineering, and Kimberlee Swisher, ASU lecturer and co-founder of the Digital Culture Summer Institute, have been awarded the NSF Innovative Technology Experiences for Students and Teachers (ITEST) grant.

The NSF ITEST grant supports projects that build understandings of practices, program elements and processes contributing to increasing students’ knowledge and interests in science, technology and information, and communication technologies. 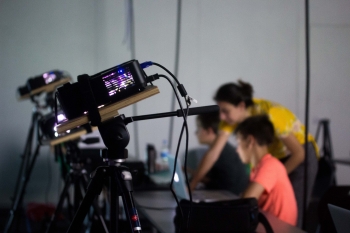 The grant will support the design and development of curriculums that will enable the professional development of middle school teachers and engage students in learning visual artificial intelligence through working with hands-on technology and interactive lesson plans.

According to Jayasuriya, the following three summers will be spent conducting four-week workshops where middle school teachers will co-create technology modules with researchers to then deploy in short courses and lessons with middle school students (sixth to eighth grade), with the goal of bringing these lesson plans into the classroom for the academic year.

The program will use computational cameras to integrate computer science, math and design thinking in teaching visual AI concepts while also drawing inspiration from media arts to enhance science learning experiences. Learning technology modules to be developed include color and lighting for physics-based vision to understand the interface between the physical world and image sensing; image classification pipelines that teach the basics of visual feature extraction, machine learning classification, and the collection and training of data; and use of machine learning for synthetically-generated visual media.

“In addition, we have a dedicated research component where we will study the factors underlying learning these new technological topics,” Jayasuriya said. “We are bringing a team of education and sociology researchers to explore these questions, and will write up any findings in education research journals and conferences.”

The proposed curriculum will also be implemented at the Digital Culture Summer Institute hosted by the School of Arts, Media and Engineering every summer. Swisher explained the main objective of the summer institute is to help provide grade schoolers a point of entry into STEM practices paired with the arts and humanities.

“Our hope is that students who have lived in disciplinary silos and who have already built identities for themselves as ‘not an artist’ or ‘not an engineer’ can start to break down those notions,” Swisher said.

A major focus of this project is to allow students from underrepresented backgrounds the ability to be exposed to arts and the humanities and STEM practices. Jayasuriya and Swisher explained there are various barriers these students face and why the interdisciplinary learning approach at the Digital Cultural Summer Institute is a crucial piece of this project.

“At DCSI we have a focus on project-based learning, and we believe that critical skills like computational thinking, collaboration, innovation and information literacy can be taught in a highly effective manner by using aesthetic challenges as motivation,” Swisher said. “When students are inspired by something and want to make it themselves, they imagine possibilities and start to ask questions. Then, as instructors, we are able to successfully help the students gain the skills they need to answer the technical questions of how, because the students have already answered the why.”

The project will continue over the next four years with the University of Georgia in the hope of positively engaging the community and increasing the education of STEM practices and arts and humanities in middle school curriculums around the states.

The logistical challenges of teaching a class inside a state prison are complicated enough during a typical semester, let alone one that includes a pandemic.This spring, an Arizona State University professor and a doctoral student were instructing 10 students based at the Downtown Phoenix campus, plus 10 more who happen to be men serving criminal sentences at the Arizona State Prison Complex-Flore...

The logistical challenges of teaching a class inside a state prison are complicated enough during a typical semester, let alone one that includes a pandemic.

This spring, an Arizona State University professor and a doctoral student were instructing 10 students based at the Downtown Phoenix campus, plus 10 more who happen to be men serving criminal sentences at the Arizona State Prison Complex-Florence. 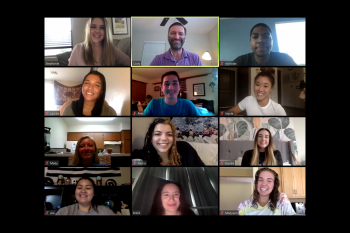 The School of Criminology and Criminal Justice offers the Communicating Justice course through a national curriculum based at Temple University and the Inside-Out Prison Exchange Program, which gives incarcerated people the chance to learn along with students from outside those walls.

The Phoenix students and their teachers, Associate Professor Cody Telep and doctoral student Stephanie Morse, boarded a couple of vehicles each Wednesday for the two-hour round trip drive to the prison. They would spend three hours in a visitation room doing what most college students do in a classroom: interacting with professors and each other, discussing readings and completing small-group work. Their classroom just happens to be behind tall fences patrolled by Arizona Department of Corrections, Rehabilitation and Reentry officers.

The incarcerated students all had either a high school diploma or a general educational development certificate, Telep said. A few had taken college courses, while most had not.

The course dealt with how communication between police and the public and between incarcerated people impacts the justice system, Telep said, and how relationships with friends, family and others are affected.

“We usually started class sitting in a circle, with small and large group activities,” Morse said. “The groups have a mix of inside and outside students, to provide opportunities to get to know one another.”

The weekly, long round trip and out-of-the-ordinary classroom setting aside, the class was going along as it had been since Inside-Out classes were first taught at ASU in 2016.

Then came the COVID-19 pandemic and the university’s mid-March decision to move in-person classes to a remote-learning format. While students at ASU’s four Valley campuses would soon be adjusting to seeing formerly in-person professors and classmates online, those serving sentences in Florence couldn’t. The incarcerated students aren’t allowed internet access or use of cellular phones. Those in the class only had tablets with restricted content and no ability to connect outside the prison.

“We had a normal class meeting the Wednesday before spring break. We had talked in January about the first ASU case of COVID-19, but not about the virus in that last class,” Telep said. “Stephanie and I talked over spring break when the prison decided to restrict visitors. We decided it wasn’t going to be safe for those inside — especially after so many of our outside students had traveled — so our goal was to as quickly as possible get word out to all our students that we could no longer go to Florence.”

The Phoenix-based students received an email about the matter on March 13, the Friday of spring break, but the incarcerated students hadn’t been told because neither of their instructors could get out to Florence to deliver the news.

Fortunately, Associate Professor Kevin Wright, director of the ASU Center for Correctional Solutions, part of the Watts College of Public Service and Community Solutions, was able to go that same day, the last day visitors were allowed. Wright brought copies of ASU President Michael Crow’s message to the university about the situation, as well as a letter from Telep saying he and Morse would do their best to continue the class.

“At first it (online-only teaching) was only for two weeks. Then, it was the whole semester,” Telep said.

Because their incarcerated students could not log on, Telep and Morse faced some unique challenges that other instructors solved by merely putting the material online. In addition, this class had no lectures, but was built upon students engaging in activities with one another.

“There’s a national curriculum you can teach. But, in this class, we were developing new content,” Morse said. “We were meeting two to three times a week for planning. That had us asking ourselves, what can we do from a distance? It became clear our ability to get into the prison wasn’t going to be there anymore. So how do we preserve the culture of the class?”

Putting assignments and resources on paper

Telep said the class went on, in part, by relying on 20th-century technology: use of a copy machine to print assignments and resources on paper and having them delivered to the prison. Corrections officers delivered the copies to the incarcerated students, and one officer got approval to use her computer to allow the incarcerated students to closely gather around it to communicate with instructors and fellow students via Zoom.

Telep praised the students for pressing on under the new, strange circumstances, and the corrections officers for helping save the day.

“With all they’ve had to do during this time, the officers were so good about getting materials to them,” he said. “In a sense, it’s very 2020 because we are meeting on Zoom with collaborative Google Docs, but in another way it’s more 1980 with copying paper documents.”

Those in Florence were asked to write letters to their classmates outside the prison, enabling them to update each other, Telep said.

Morse said class members are thinking of ways to enhance the lives of those in a correctional setting.

“It’s something to see students thinking of others right now,” she said. “They’re discussing new ways to impact their lives after release, ways to help others. It’s incredibly admirable.”

Telep said that since 2016 the number of incarcerated students who have completed Inside-Out classes has grown, including some who have entirely served their sentences. Plans are being talked about to invite these former class members back to talk about how their educational experiences impacted their lives.

Students from inside and outside the prison are struggling with dealing with the pandemic, Telep said, and bonds formed in the first half of the semester when they were meeting in person were able to continue.

CRJ 317: Inside-Out Prison Exchange Program, will be offered next in spring 2021 at a state women’s prison in Perryville west of Phoenix, where it was taught in fall 2019.