ASU grad turns dream of exploring the universe into a reality

Senior Jessica Maschino is about to graduate from Arizona State University with a bachelor’s degree in exploration systems design from the School of Earth and Space Exploration. 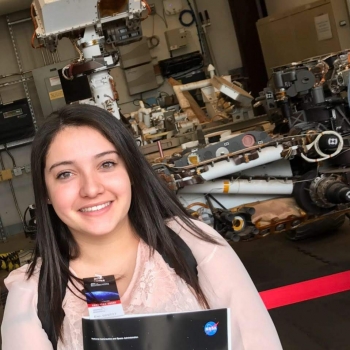 She will be putting her knowledge to use this summer when she heads to Pasadena, California, for an internship working on the Mars Rover at NASA’s Jet Propulsion Laboratory (JPL).

Growing up in Gilbert, Arizona, she didn’t have to go far from home for college, but she took all the opportunities ASU had to offer when making her decision.

“When I first arrived at ASU, I was reserved and could have never imagined doing the things I've done. I've participated in Engineering Projects In Community Service (EPICS), founded my own LLC, pitched to angel investors in Silicon Valley, and competed in and placed eighth in the world in the SpaceX Hyperloop Competition II,” Maschino said.

During her time at ASU, she has  worked on three NASA missions — Europa Clipper, Mars 2020, and Psyche. She was also in a commercial for ASU, and more recently she planned and co-hosted SpaceVision 2019, the world's largest student-led space conference.

“Jessica is really passionate about engineering and space exploration," said Cassie Bowman, associate research professor in the School of Earth and Space Exploration and co-investigator on the ASU-led NASA Psyche Mission. "Her enthusiasm inspires others to dream big!”

After her internship at JPL, Maschino plans to return to ASU to finish her bachelor’s degree in mechanical engineering from the Ira A. Fulton Schools of Engineering, and plans to continue interning on the NASA Psyche Mission.

We caught up with Maschino and asked her about her time at ASU.

Question: What was your “aha” moment?

A: My "aha" moment first came to me when I was a sophomore in high school. I was fortunate that my high school counselor invited me to go to the “HERMANAS Conference” which is hosted by Intel and empowers minority women and encourages them to pursue degrees in STEM. It worked, and I pursued a degree in engineering/science at ASU. In my sophomore year, I decided to take an online class that focused on the Drake equation and finding habitable worlds outside of our own. I fell in love with the idea of exploring our universe and later that semester, Bill Nye gave a talk on campus in the Gammage Auditorium and said that there were jobs in space and that space exploration needs all types of people. That night I decided I would switch paths and committed to studying earth and space exploration.

A: I've learned many things at ASU, but the one that stands out to me most is that anybody can have an idea and start a business. I took a class centered around entrepreneurship and ended up founding my own start-up with a classmate. We became Prescott Fellows after coming out on top at the 2016 Demo Day pitching competition. We've been awarded close to $30,000 in seed funding, are working on filing a patent, and are working to get our product into the market.

A: I chose to go to ASU for several reasons. ASU provided me with a merit scholarship that paid for my tuition, had a wide range of engineering degrees for me to choose from, and if that wasn't enough, the Tempe campus was beautiful. I definitely made the right choice. Throughout my undergraduate journey, I've been able to find communities of people who are passionate about the same things I am.

A. My best piece of advice is to find things that make you uncomfortable — sending cold emails to a professor you want to research under, giving a speech, asking for help — and to find ways to force yourself to do them. These were all opportunities I was able to take part in because I pushed myself out of my comfort zone. You make the most progress when you're doing new things.

A. After graduation, I am going to be interning at the NASA Jet Propulsion Laboratory working on developing training tools for the next generation of Mars rover drivers.

Editor's note: This story is part of a series of profiles of notable spring 2020 graduates.Aleisha Johnson is curious. She’s especially curious about the Great Oxidation Event, when Earth first developed an oxygenated atmosphere. It is one of the primary reasons she came to ASU to do her research.Johnson first met her mentor and adviser, Arizona State University School of Earth and Space Exp...

Aleisha Johnson is curious. She’s especially curious about the Great Oxidation Event, when Earth first developed an oxygenated atmosphere. It is one of the primary reasons she came to ASU to do her research. 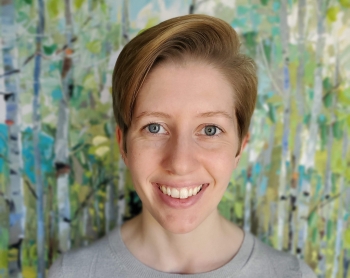 Johnson first met her mentor and adviser, Arizona State University School of Earth and Space Exploration Professor Ariel Anbar, who also holds a joint appointment with the School of Molecular Sciences, at a Geological Society of America Annual Meeting in 2013. He was studying the Great Oxidation Event and she thought it was the coolest thing she had ever heard of.

“It turns out there’s a lot we still don’t know about Earth’s ancient atmosphere, or how it influenced the evolution of life on Earth,” Johnson said. “I’ve been excited about these big questions ever since.”

“Aleisha was one of the first in her family to go to college, and the move to Phoenix and a school the size of ASU was a big, scary jump,” Anbar said. “But she was also like a kid in candy shop, delighted by all the new things she was suddenly learning about Earth and space.”

Johnson, who graduates in May from ASU with her PhD in geological sciences from the School of Earth and Space Exploration, will be heading to the University of Chicago for a National Science Foundation Postdoctoral Fellowship.

“Her curiosity became her pole star, guiding her forward,” Anbar said. “Flash ahead five years and the curiosity and delight are still there, but now framed by the sort of confidence that only comes from accomplishment. She’s figured out important and difficult things that she didn’t even know were worth thinking about just a few years ago, and now she is the one showing the rest of us what is worth thinking about.”

We caught up with Johnson and she answered some questions about her time at ASU.

Question: What's something you learned at ASU, or advice you would give?

Answer: I learned many things! I learned not to compare myself to others — everyone’s path will look different and success comes in many forms. I’ve learned to celebrate every milestone, including the milestones of my friends. You’ll never reach the end of your to-do list, and there’s always more you could be doing, so it’s important to set boundaries and be realistic about your time and bandwidth. It’s OK to say no to things. Show your advisers/mentors/peers appreciation often, especially for their time. I didn’t realize how important my network of mentors and peers would be, but I could not have completed this degree without them.

A: I chose ASU for three reasons. The first was that I was really excited about studying the rise of oxygen in Earth’s atmosphere, which I knew nothing about, but couldn’t wait to study. The second reason was that when I visited, I could see that everyone was doing world-class science — but more importantly, they were happy. It’s hard to describe, but when grad school is a new, terrifying thing, meeting people who actually enjoy the work they do and like the people they work with goes a long way. The culture in the school has always made me feel like things were going to be OK. The third reason I chose ASU is for the climate. When I first visited ASU, I was visiting from Wisconsin in the middle of a polar vortex. Moving away from the snow wasn’t the main deciding factor, but I can’t deny it played a role.

A: Definitely the Starbucks. I could be stuck on a research problem all day, and I would take a break and ask my lab manager if he wanted to get coffee. The combination of taking a break and talking through what I was stuck on almost always fixed the problem, or at the very least, helped me gain some perspective on it. A 15-minute coffee break could be more productive than an entire day staring at my computer.

A. I’ve accepted a National Science Foundation Postdoctoral Fellowship to work at the University of Chicago! My project will be to measure titanium (Ti) isotope fractionation in modern volcanic systems, which will help us better interpret Ti isotopes in ancient sediments and their ability to trace the composition of Earth’s ancient continental crust.