Arizona State University student Justin Wright has lived a lot. Hence, Wright has a lot of life lessons to impart. 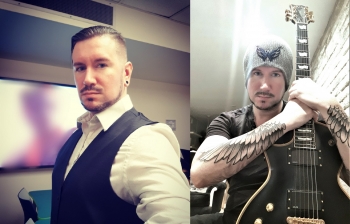 Graduating MTESOL student Justin Wright believes that it's important to showcase “who I am and what I’m about,” both inside the classroom (buttoned-up professional), and out (musical artist). Download Full Image

“So much happened in the eight years between the start of my ESL career and my enrollment at ASU,” he said, “I could literally have written a book about all the experiences. I took a really unorthodox route to where I am today.”

Wright — also a rock guitarist and former hockey player — is earning a Master of Teaching English to Speakers of Other Languages (MTESOL) degree this May. Before his spring internship was retooled due to the coronavirus outbreak, Wright was also teaching ESL at Gateway Community College. He said that he felt “right at home” in that setting. He compared language learning to music, stressing the universality of human connection and communication.

“There is nothing more satisfying,” Wright said, “than to see an ‘a-ha’ moment on a student’s face when they realize that learning English is something they can do. As a musician, I use a metaphor of different songs of the same length. While each song may get to the end using a different rhythm, they all conclude at the same time. Language is the rhythm.”

ASU Now sat down with Wright to find out more about his meandering educational journey and what’s next on his quest for multivaried experience.

Answer: After spending a few years playing ice hockey and guitar, I enrolled at Virginia Commonwealth University in Richmond to pursue a BA in international studies. Prior to enrolling, I traded guitar lessons for Arabic lessons with a family of Lebanese/Saudi heritage — I think I learned more Arabic than the daughters learned guitar. As turned out, I learned so much Arabic, I became a TA at VCU assisting one of my favorite professors of all time, Salwa Sheibany, in all of her classes. This was my first experience with teaching and I really enjoyed it.

Also while enrolled at VCU, I began an internship at Commonwealth Catholic Charities in Richmond, Virginia with a simple data entry job. There, I was invited to assist with an ESL class that met two nights a week. Looking back, the funny part is that I thought I would be a real asset due to my language skills. But I found that the class was a group of fifty-five adults who had just arrived as refugees from Bhutan, and my language skills were more or less worthless in this scenario.

When I offered to come to one family’s apartment to tutor them, I arrived to find around forty pairs of sandals outside their door as the entire neighborhood wanted to be involved as well. It made for a stuffy working condition, but I volunteered my time and did not want to let anyone down. Seeing these people with smiles on their faces was the first “a-ha” moment for me.

After graduation, I worked as a volunteer ESL teacher with Migration and Refugee Services in my hometown of Fredericksburg, Virginia. The students were newly arrived refugees from Afghanistan and Iraq. While I didn’t understand the languages of Afghanistan — there are many depending on which area of the country you are from — I did know how to write Arabic script. So, I could write vocabulary words in their script and when they would read what I wrote it would sound like a perfect pronunciation of the vocabulary word we worked on. Finding that I could use my knowledge of language to help these people was the second “a-ha” moment for me.

At the end of that summer session, I was hired to teach Adult Basic Literacy Level 1. I did that for seven years, with mostly Spanish-speaking students. At the end of my time there, and looking back on everything that “we” accomplished — meaning my students and I — I had a final “a-ha” moment: I knew that if I wanted to branch out and help more people, I would need to further my own education.

I decided to start as a non-degree seeking student at ASU and prove myself. My goal was to take four classes, prove I belonged, and then apply for admission. It wasn’t an easy path, but with letters of recommendation from each of my ASU instructors, and a very high GPA, I was admitted to the MTESOL program which I am about to conclude.

A: I have an interesting take on this question because I sort of did everything in an unorthodox manner. I taught ESL professionally for seven years before I even started the MTESOL program at ASU. I think the most interesting thing about the experience was learning that there were terms and theories for approaches I had already used in my classrooms on a trial and error basis.

A: I came out to Arizona with my family years ago and really fell in love with the state and made friends quickly. Before ASU, I would teach in Virginia during the academic year, then move to Arizona to work in the restaurant industry and live the AZ lifestyle. Still, to this day, I will take the Arizona heat over the Virginia humidity. I knew I wanted to pursue my master’s degree and after looking into ASU, I thought it would be the perfect fit for me.

A: During my non-accredited student days, the professor that taught me the most important lessons was (English Faculty Associate) Lupco Spasovski, whom I had as a professor for two different courses. After being admitted to the MTESOL program, all of my success, and hopefully (knocking on wood) the success of my final assignments, were due to (Associate Professor) Mark James. When I felt like I had no idea what was going on, he would always make the time to chat and I would always leave feeling energized and focused.

While this question pertains to ASU professors, I’d also like to acknowledge a few former professors and professionals from other institutions, because if not for them I wouldn’t be where I am today. They are: Professor Carol Kramer, Professor Salwa Sheibany, Professor Archana Pathak, and RARAE Director (retired) Betsy Mathias.

A: I had to overcome a lot to get where I am today. You’re going to have a lot of people tell you “no.” You have to have that chip on your shoulder that allows you to go out and prove all the naysayers wrong.

The second piece of advice I’d give to those still in school is that in the real world, we like to think that there is a logical reason for every decision. This is not true. I used to know a person who worked in an HR setting who would take a stack of resumes, divide them in half, and throw half in the shredder. His reason? He didn’t want “unlucky” people working for his company. The lesson here is that not everyone who tells you “no” has a good reason. With people like that in the world, you can’t take rejection to heart.

A: Before the virus hit, I was supposed to interview with representatives from a few MLB teams that participate in the Cactus Spring Training League regarding joining their ESL programs for players who need to work on their English.

I do plan to stay in Arizona as I have become an official resident and I look forward to taking my master’s degree and using it to serve more students in the Phoenix area in their pursuit of learning English.

A: If I had $40 million to solve one problem, it would be to fund every cost an asylum seeker incurs in the process of obtaining asylum in the U.S., as they flee danger in their native countries. After hearing seven years’ worth of horror stories including murder, rape and general brutality, I would hope anyone in my situation would do the same.

Sun Devil Football running back Eno Benjamin was selected with the 222nd overall pick in the seventh round of the 2020 NFL Draft by the hometown Arizona Cardinals on Saturday. ... Sun Devil Football running back Eno Benjamin was selected with the 222nd overall pick in the seventh round of the 2020 NFL Draft by the hometown Arizona Cardinals on Saturday.