Adam Thompson has a long list of interests that, when first starting out at Arizona State University, made it somewhat difficult for him to choose a major. It was this diverse set of interests that led him to pursue dual majors from the university. 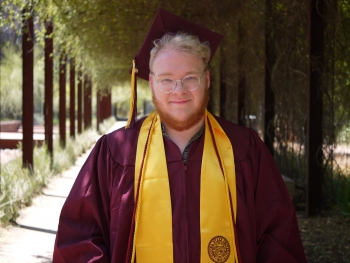 This spring, Thompson will earn two bachelor’s degrees — one in psychology from The College of Liberal Arts and Sciences and another in applied biological sciences from the College of Integrative Sciences and Arts. He will also earn a certificate in cross-sector leadership through the Next Generation Service Corps (NGSC) at the Watts College of Public Service and Community Solutions.

Early on, Thompson, a Barrett, The Honors College student, had a great interest in biology, psychology, public service and medicine, but wasn’t quite sure how these could all fit together. After becoming a part of the NGSC and participating in several internships in the health care field, Thompson began to find his place and see a path forward for himself as a health care provider who could address health inequalities from a public service standpoint.

“I've really come to value public service and its intersection with medicine,” Thompson said. “My philosophy is that I think all doctors and health care providers, in general, should have a public service mindset. I’ve learned that it's not enough to just be a provider.”

Upon graduation, Thompson plans on returning to ASU in the fall to pursue a master's degree in the science of health care delivery. As an Arizona-native from the suburb of Chandler, he has a passion for serving his community. This passion drives him toward his ultimate goal of using his skills to improve health care services for local disadvantaged populations.

Thompson shared more about his experience at ASU.

Answer: I'm definitely someone that needs to see how I am specifically able to make an impact in a certain field in order for it to be fulfilling for me. I was struggling to figure out what I wanted to do so I did two internships my freshman year. I found out that I loved working with kids. Many of the kids I worked with were low income and from culturally diverse families who had a lot of complex needs that weren't being addressed. Seeing individuals navigate this complex health care system and observing the many inequalities they face firsthand –– like their communities not providing safe spaces for their kids to play in, or being in a food desert –– really shaped what I wanted to do as a career. I saw that gap and I wanted to be the one to help bridge that gap.

A: The health psychology course I took definitely introduced me to the perspective of the intersection of health care disparities and psychology, helping me to sort of bridge the gap of what I was doing in my research lab through the Department of Psychology at the REACH Institute. The course helped me gain a little bit of context on why certain health disparities occur for certain cultural groups and helped me to see how programs could be more culturally competent. My cross-sector collaboration course that I took definitely opened up my eyes to how a lot of the social inequalities that we see, not even just in health care but across the board, can be solved through partnering with different organizations. I learned a lot about how we can use cross-sector collaboration as a model to help decrease some of the barriers that families have in accessing health care resources. Through my research I found that organizations that collaborate with nonprofits, public sectors and private sectors were more successful and saw more family engagement.

A: I would say lead with your heart, especially when it comes to finding different opportunities that you're interested in. Don't just do something because you think it will look good on your resume. Find things you can do where you’ll be able to grow and develop as a person and develop your passions. I’ve found that the things I pursued purely to get that experience and not because I was passionate about them didn’t always work out, and I eventually had to move on from them because I didn't feel fulfilled. I encourage students to find what makes them unique and to pursue things that advance a social cause that they're passionate about.

Q: What are your plans after graduation and into the future?

A: Next year I am planning on staying at ASU and pursuing a master's in the science of health care delivery. After that I plan on applying to medical school to do something where I can interact directly with patients because that's definitely a passion that I have. I'm thinking I’d like to go into pediatrics or primary care, or just somewhere that I'm able to help a disadvantaged population or community. I’d also like to do research on population-wide health in public health and health psychology. I can also see myself being involved in politics in the future and shaping health policy.

A: Expanding access to health care, especially for disadvantaged populations. Making sure that everyone has access to health care and are able to live healthy and fulfilling lives. Also doing more research into how cross-sector collaboration can fit into the health care field as well because there's not a lot of research on the model that NGSC teaches. This is broadly what I aspire to do.

In another first for the excelling actuarial science program at Arizona State University, a team of four students took first place in the Society of Actuaries (SOA) Student Research Case Study Challenge. Now in its fifth year, the SOA challenge drew 68 teams from 32 universities around the world.Team Emission: Impossible, this year’s first-place team, was made up of Joseph Hoffman, Brady Lybarge...

In another first for the excelling actuarial science program at Arizona State University, a team of four students took first place in the Society of Actuaries (SOA) Student Research Case Study Challenge. Now in its fifth year, the SOA challenge drew 68 teams from 32 universities around the world.

Team Emission: Impossible, this year’s first-place team, was made up of Joseph Hoffman, Brady Lybarger, Walker Reinmann and Kinsey Turk and was awarded a $5,000 grant for ASU, as well as $500 cash prizes for each student. Last year Team Pink, an all-female team of ASU actuarial students, placed third overall. “Our team earning first place shows that Arizona State’s actuarial science program and its students are among the best in the nation,” said Al Boggess, director of the School of Mathematical and Statistical Sciences.

The SOA Student Research Case Study Challenge provides an opportunity for teams of students to apply their actuarial skills on a real-world problem. Over the course of eight weeks, teams research a case study situation, conduct actuarial analysis, develop solutions and complete a professional written report. Selected finalists then present their results to an international panel of judges.

This year, the challenge focused on designing a carbon credits program. A carbon credit is a government-issued permit that gives the holder, such as a company, the legal right to emit 1 metric ton of carbon dioxide or an equivalent amount of other greenhouse gases.

Student teams worked to help a fictitious country called Pullanta, which is economically developed with a population of about 20 million people. Pullanta’s government recently set a goal of reducing carbon emissions to 25% below the 2018 level by the end of the year 2030.

The teams were "hired" to design a carbon credit program for Pullanta, which encourages reducing carbon emissions and generates revenue to fund climate change mitigation, and to recommend a comprehensive implementation plan for their programs.

“We started by designing financial instruments that would guarantee emissions reach those goals over the next 10 years with relative certainty,” said Lybarger. “Then it just became a matter of building a program around these instruments and ironing out the kinks.”

“The data that we received for the case study was incredibly limited and left several assumptions to be made,” explained Turk. “This was challenging since we had no actuarial experience to base these assumptions on. Instead, we had to conduct rigorous research to arrive at our final findings.”

“At times we would implement something we thought would work, and then later find flaws," said Reinmann. “Working out how all our regulations and products would coincide was overall the most difficult part of this case study.”

A panel of international judges for the challenge was impressed by the exceptional innovation demonstrated by the teams while maintaining mathematically and actuarially sound principles in their analysis. The top teams also provided solid answers to the judges’ questions that showed they had thoroughly considered multiple approaches and had made thoughtful, well-considered decisions.

“Team Emission: Impossible, besides the routine actuarial analysis, realized the importance of providing the government with concrete recommendations on regulation,” said Russell Hendel, an adjunct faculty member at Towson University in Maryland. “While most teams realized that remedies to the emission problem had to be done by sector, Team Emission: Impossible also recommended a unique floating bond for sectors with unique challenges.”

“I liked Team Emission: Impossible’s ‘nearest neighbor’ methodology, where a comparison with attributes of several countries was used to derive the social cost of carbon development for the country in the case study,” said fellow judge Carlos Arocha, a managing partner of Arocha and Associates in Zurich, Switzerland.

The timing of the competition brought another unexpected challenge: the COVID-19 pandemic.

“Last year, the team could get together in person to practice and present the results to the online judges. However, this all changed to online this year due to COVID-19, and each of them had to get used to presenting virtually at home,” explained Hongjuan Zhou, professor of practice in actuarial science at ASU and faculty adviser to the team. “I am impressed by the team for their efforts and time devoted in the case study. It is an accomplishment to write a professional report and make an excellent presentation to experienced actuaries.”

Hoffman encouraged other students to participate in future challenges.

“I would definitely recommend the case study challenges to students. While the actuarial science program at ASU is very thorough in developing mathematical and analytical skills, it is important to develop non-mathematical skills such as the ability to manage projects, the ability to work in a team and the ability to invent creative solutions to realistic problems,” said Hoffman. “The case study gave us the opportunity to combine all of these skills, which I think has contributed greatly to our professional development.”

Students from Shenzhen University in China received second place with a $3,000 grant, and third place went to students from University of California, San Diego with a $2,000 grant.

ASU’s School of Mathematical and Statistical Sciences actuarial science program has been an important source of actuarial employees for insurance companies since 1994 and launched its Bachelor of Science degree in 2014. Last fall, a Master of Science in actuarial science degree was introduced. This program provides possibilities for the school to collaborate with the actuarial industry on research in areas such as predictive analytics, reserving and pricing.